US soybeans pile up as trade war tests Trump's support base 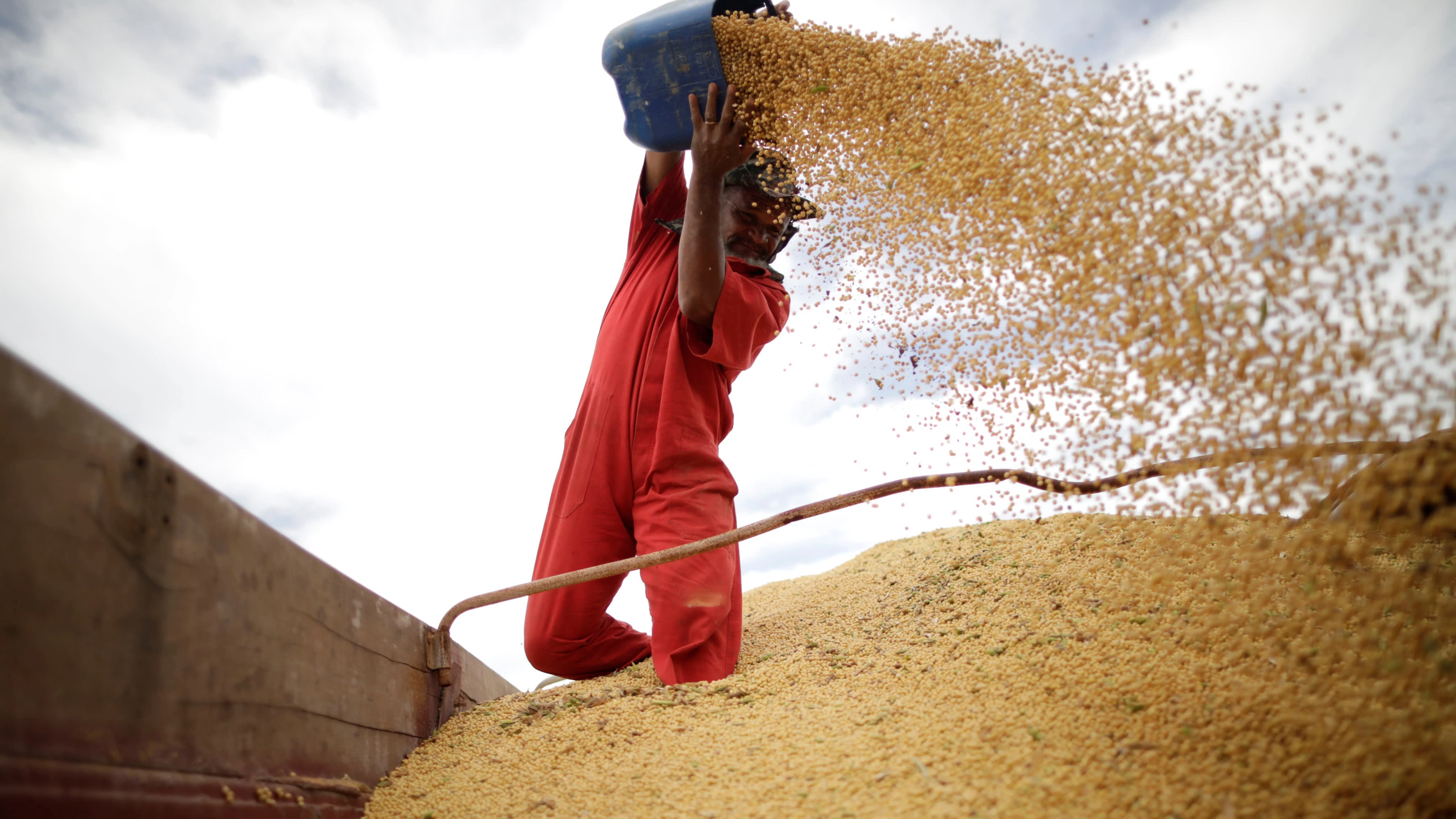 A worker inspects soybeans during a harvest. The U.S. will likely have another year of soybean abundance.   © Reuters

NEW YORK/CHICAGO -- Pressure is growing on the Trump administration to reach a trade deal with China as U.S. farmers struggle to find alternative markets for their crops, the latest agricultural data indicates.

The U.S. Department of Agriculture on Monday published a pair of highly anticipated reports on crop production as well as world supply and demand estimates. Even though soybean production is expected to fall nearly 20% in 2019 to 3.68 billion bushels, farmers are expected to be left with a surplus of 755 million bushels, only 5% less than last year.

The reports brought unwelcome news to corn farmers, too, with corn prices in Chicago plunging to their lowest since mid-May after the USDA announced better-than-expected yields for the previous month, erasing three months of slow but steady price gains.

The reports are the first since the latest shots in the trade war were fired. China, the world's largest soybean buyer, announced it had stopped buying American farm goods after President Donald Trump earlier this month threatened to impose 10% tariffs on another $300 billion worth of Chinese goods.

According to the USDA, soybean yields are predicted to reach record highs in Arkansas, Kentucky and Tennessee.

"We are concerned about the trade negotiations, we would like an immediate resolution of trade tariffs. We feel like it is hurting our price, hurting our demand," Brad Doyle, a soybean farmer based in Arkansas, told the Nikkei Asian Review. "That is absolutely something we want resolved quickly. We want free trade with China, but we also want our rights protected along the way."

Doyle said his contacts in China who work with local private buyers told him the color of American soybean oil is different from that of Brazilian soybean oil. He said Chinese buyers prefer the quality of U.S. beans but are unable to purchase them because of the trade war.

At the same time, African swine fever continues to ravage China's hog industry, once a major consumer of American soybeans. This means that even if a trade deal is reached, demand for soybeans may not bounce back quickly.

Farmers, who form an important support base for the president, are nevertheless calling on the Trump administration to resolve the trade dispute with greater urgency. Their continued support for his trade war may prove a deciding factor in the 2020 presidential election.

"We have made several trips to Washington, D.C., and continue to lobby our legislators to do what they can do to make the tariff situation go away," said Brian Kemp, director of the American Soybean Association, during a recent conference call hosted by the U.S. Soybean Export Council.

Adverse weather has only exacerbated the situation.

Many soybean farmers had planned to switch to corn this year due to uncertainty surrounding the soybean trade, but excessive rain made that impossible.

"I planned to plant more corn, but because of the late, cool and wet spring, I did not plant the acres I wanted," said Monte Peterson, a soybean farmer living in North Dakota. "I ended up planting more soybean than I had intended and I have about 10% of my land that did not get planted at all."

Doyle said he knows farmers in Arkansas, South Dakota, Wisconsin and Minnesota who have left large areas of their fields empty.

Even those who managed to plant their fields are unlikely to harvest as much as they had hoped.

Crops that are planted late have shallow roots, which means they cannot efficiently access the moisture in the soil in summer. Farmers who planted corn after the floods are forecast to lose 8 million acres worth of harvest, while soybean farmers will lose roughly 1 million acres, according to USDA estimates.

"The U.S. farmers had intended on planting a larger level of corn in 2019, but weather has thrown them and the market a curve ball," said Brandon Kilemmes, a senior economist at IHS Markit and a soybean farmer in Missouri. "Hot dry weather during reproduction and grain fill will cause plant stress to corn and soybeans leading to smaller yields and thus smaller supplies."

The USDA took the unusual step of releasing a production report in August after its June report was criticized for failing to reflect the severe impact of floods and excessive rain on planting schedules.

While U.S. farmers battle the weather and trade tensions, a longer-term potential risk comes from other major agricultural countries stepping up their exports to China.

Brazil has surpassed the U.S. as the biggest soybean exporter and could do the same in corn next year, according to Dan Basse of AgResource, a Chicago agriculture research company.

And China, as may be expected, is rushing to diversify its suppliers and limit its reliance on American farmers.

Back in the U.S., the soybean export council has been investing heavily in Southeast Asia to find new buyers, according to its recent briefing call.

The council has put together a strategy called "What It Takes" to examine ways to replace the demand for soybeans in China with other markets, according to Jim Sutter, the organization's CEO.

Sutter said he and his colleagues went through all the soybean buyers in the world country by country to expand existing markets and develop new ones. But offsetting China's demand will "take some years."

He said the council has been working on expanding markets for U.S. soybeans for a while, but with the trade war devastating American farmers, the agency is trying to realize the impact of their work "at maximum speed."

"Southeast Asia collectively produces 116 million metric tons of total compound feed annually and growing," said Manuel Sanchez, regional director of Southeast Asia for the U.S. Grains Council, during the call. The Council is hoping that emerging markets in the region can catch up to China's demand.

Kemp also said the Philippines has overtaken Mexico as the largest buyer of American soybean meal, an animal feed made from crushing soybeans.

However, in terms of soybean sales, China purchased over 2 million tons in July, while the Philippines and Mexico combined bought just 27% of that amount in the same period, according to USDA data.