SINGAPORE -- Manufacturers in some emerging Asian nations are facing a decrease in demand for exports despite currency depreciation, according to the latest Nikkei Purchasing Managers' Index survey, which covers major Asian countries except China.

Slowing global economic growth, partly due to the U.S.-China trade war, is gradually affecting manufacturers in the region.

The monthly PMI survey asks companies about changes in output, orders and other business conditions compared with a month earlier. A PMI reading below 50 shows a contraction, while one above 50 points to expansion.

One trend observed in the September survey was an easing in exports from emerging nations. This happened even in countries with a weakening local currency, which in theory would boost their exports since cheaper goods encourage other countries to buy them.

In the Philippines, the peso has weakened 8% against the U.S. dollar over this year to the end of September. On the other hand, the country logged a decline in export orders for the first time in seven months in the PMI survey, with its New Export Orders Index standing at 49.8. 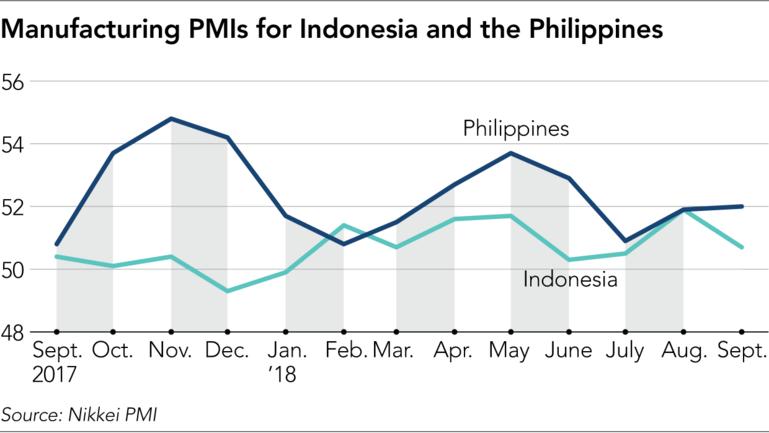 The Philippines' major export items are electronics goods and their main export destinations include China and the U.S. With the two biggest economies imposing tariffs each other, it might be inferred that there has been a decline in demand from these markets.

Similarly, Indonesia's New Export Orders Index was 49.5 for September, marking a contraction for the tenth month in a row, despite the Indonesian rupiah falling to a 20-year low against the dollar in September and further depreciation in October.

Taiwan's New Export Orders Index also dropped to 47.3 in September, the first contraction since May 2016. A number of Taiwanese companies cited weaker demand across key markets such as China, the U.S. and Europe, according to the survey. Since Taiwan is home to electronics suppliers such as Taiwan Semiconductor Manufacturing Co., the latest trend may affect those manufacturers in the coming months.

Behind the reduced overseas demand is a slowing global economy, partly as a result of the U.S.-China trade wars. The International Monetary Fund in early October downgraded its global economic growth forecast for 2018 by 0.2 percentage points, to 3.7% from the previous projections in July. The IMF also downgraded this year's exports growth in emerging markets and developing economies around the world by 0.6 percentage points to 4.7%. According to the September PMI survey, the weaker currencies in emerging Asia had some impact on manufacturers' purchasing costs.

In the ASEAN PMI, which covers manufacturers of seven Southeast Asian nations, the Input Costs Index was 58.3 in September, its highest level since April 2017. For Indonesia, the Input Prices Index was 61.7, the highest in three years.

"Strong cost pressures persisted across the region, with several countries reporting sharp increases in input prices due to unfavorable exchange rates against the dollar," said Bernard Aw, an economist at IHS Markit.

Overall, in the September survey, among the 15 sets of PMIs the Nikkei survey provides, eight countries had lower headline PMI readings than the August figures, while six were higher than a month ago and one was unchanged. Japan's manufacturing sector topped the list at 52.5, followed by India's manufacturing sector at 52.2. Myanmar had the lowest reading at 47.5.