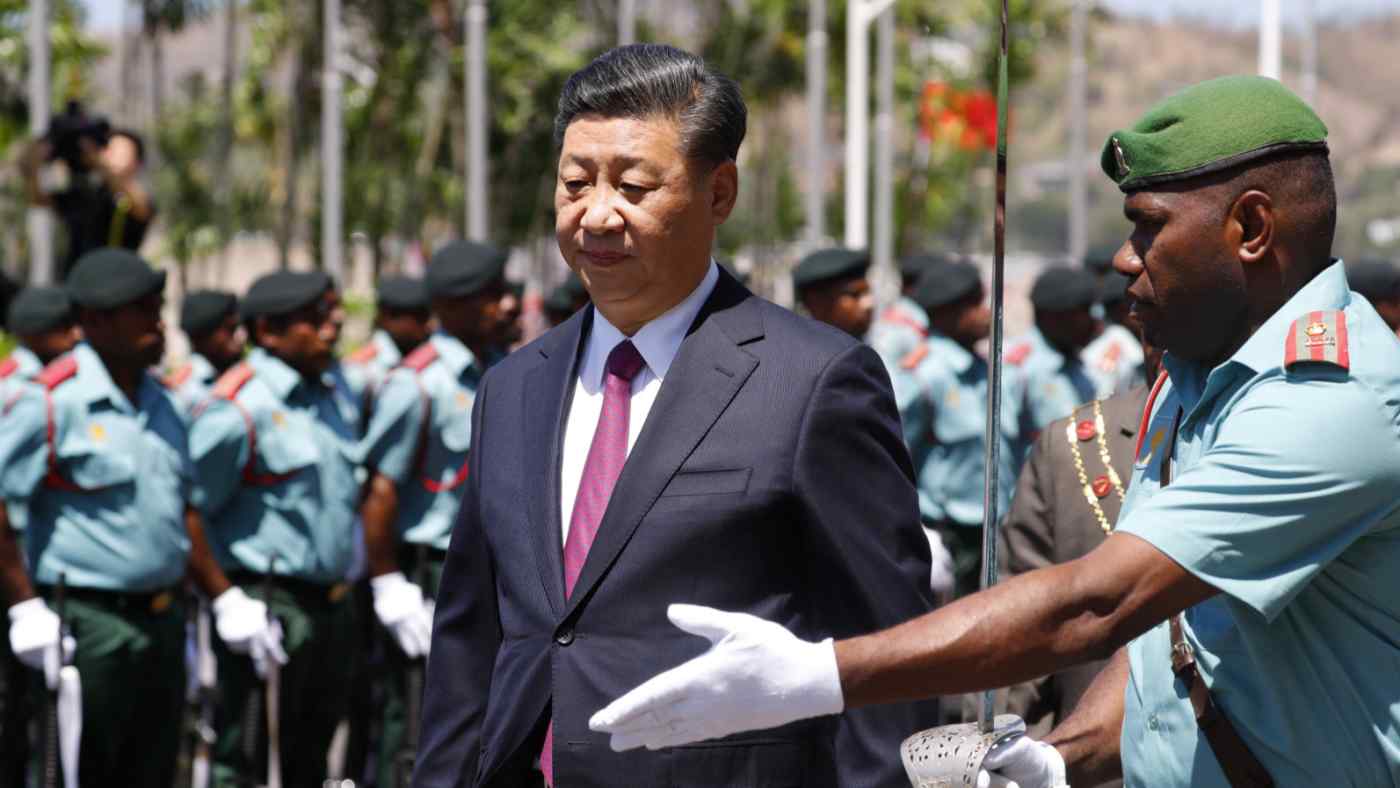 PORT MORESBY -- Chinese President Xi Jinping arrived here on Thursday night for this weekend's summit of the Asia-Pacific Economic Cooperation forum ahead of all other leaders, eager to establish Beijing's presence in the region while U.S. President Donald Trump chose to stay home.

Leaders from 21 economies will gather on Saturday for the two-day summit here in Papua New Guinea's capital. After wrangling over regional security in Singapore, the U.S. and China are expected to spar over trade, dimming prospects for a truce at a tete-a-tete later this month in Argentina where the leaders of the two countries are scheduled to meet.

The U.S. will be represented by Vice President Mike Pence at APEC.

Xi met on Friday with Papua New Guinea Prime Minister Peter O'Neill and stressed the importance of free trade. The early meeting is seen as part of the Chinese leader's efforts to prevent issues unfavorable to Beijing, such those on the South China Sea, from becoming the focus of the summit.

Xi joined O'Neill in a tour of Independence Boulevard, a major road built near the country's parliament with Chinese assistance. Xi promised his country's commitment to supporting infrastructure projects in Papua New Guinea.

The Chinese president invited to his hotel the leaders of eight Pacific Island nations that have no diplomatic relations with Taiwan, including Papua New Guinea and Fiji. But he did not invite six others that maintain such ties, including the Solomon Islands and Kiribati. Xi's promise of bolstering economic assistance to those eight countries is seen as pressuring other nations to build relations with Beijing instead of Taipei.

A glimpse of how the leaders will debate trade issues came on Thursday during a ministers meeting, where U.S. officials underscored the need for "fair and reciprocal" trade. The Trump administration uses this phrase in justifying its hard-line stance.

Without mentioning China, U.S. Deputy Trade Representative Jeffrey Gerrish took a jab at countries that "are not market economies," which subsidize state-owned enterprises to gain undue competitive advantages, forcing rivals from other nations to transfer technologies, according to a senior official of an APEC member country.

The official described a "heated exchange about protectionism between China and the U.S." during the drafting of the ministers' statement on Thursday.

As of Friday afternoon, the ministers had not released a statement on their meeting, suggesting extended negotiations on what the communique should say.

The ministerial-level debate likely will reflect the discussion at the leaders' meeting on Sunday. Xi and Pence will take part along with the heads of the 19 other APEC economies.

At the East Asia Summit held in Singapore on Thursday, the two powers exchanged harsh words over the region's security.

Chinese Premier Li Keqiang told the gathered leaders that the conflict over the South China Sea should be resolved by the countries involved, without intervention from others. Pence insisted that "militarization is illegal," an apparent allusion to Beijing's artificial islands and military installations in the contested waters.

The U.S.-China spat could draw in other countries. "For APEC, it is a new situation that two of its largest members are locked in hostility, and the concern will be whether the hostility starts influencing the characterizing of the grouping," said Amitendu Palit, a senior research fellow at the National University of Singapore's Institute of South Asian Studies.

Smaller members, he added, would like a constructive and harmonious APEC, "but that might not remain possible because you have the U.S. and China at loggerheads."

A draft of the leaders' declaration suggests a compromise. "We remain committed to continuing APEC's leadership to promote free and open markets and fight against all forms of protectionism and other trade distorting measures," it says.

The U.S. and China are expected to intensely lobby other members to have their interests reflected in the final communique, which is expected to be released after meetings end on Sunday.

Xi plans to visit Brunei after the APEC summit, seeking to deepen ties with the country rich in oil and natural gas. The visit is seen as an effort to secure an alternative source of oil in case U.S. sanctions in Iran disrupt China's procurement.

At a meeting with Philippine President Rodrigo Duterte scheduled later, Xi is expected to explore common ground on the conflict over the South China Sea. While the Philippines is calling for a code of conduct in the water body, Duterte is showing a softer stance toward China.

Xi is scheduled to return to Beijing on Wednesday, and head to Argentina one week later to attend the G-20 summit. He is expected to meet with Trump for the first time in about a year.