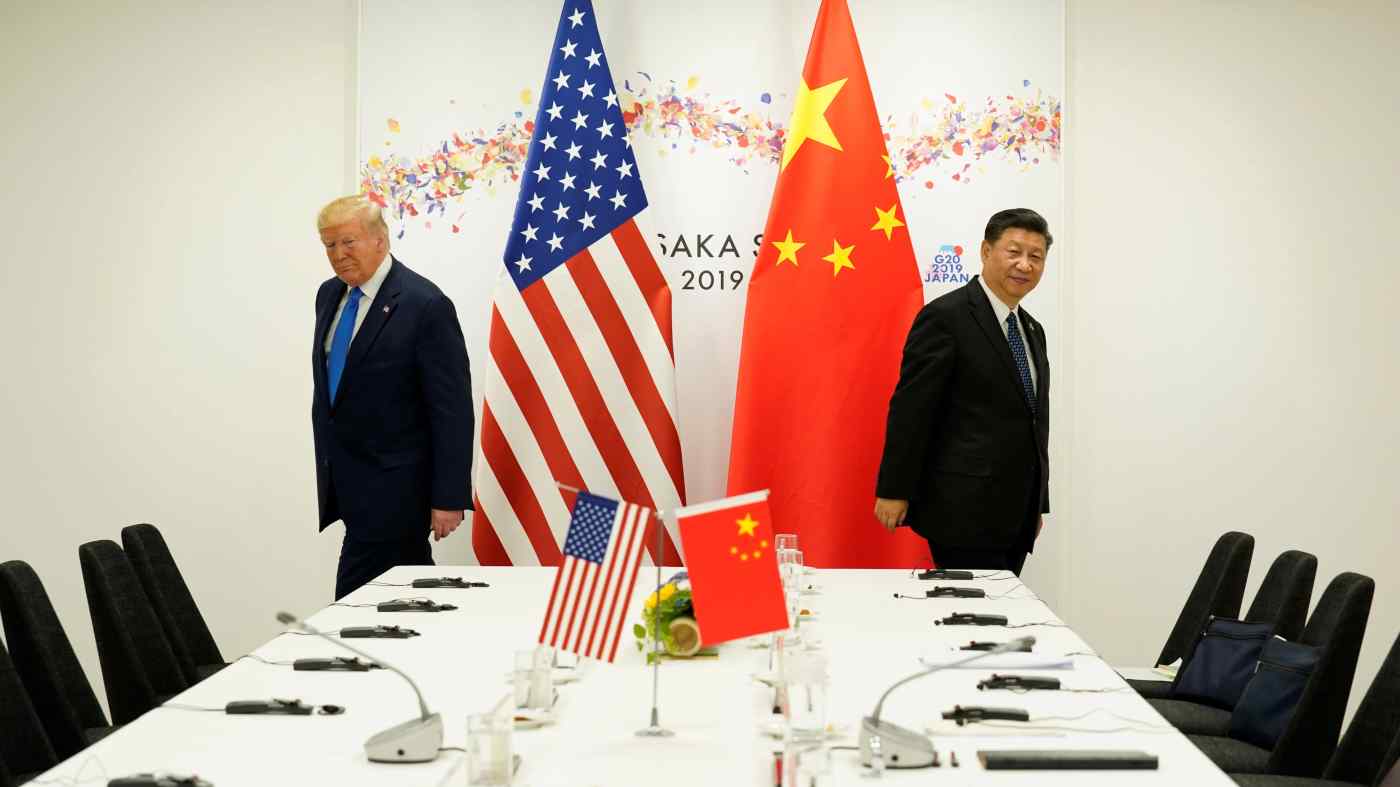 TOKYO -- With no end in sight to a yearlong Sino-American trade war that has dragged down each country's exports to the other by roughly $20 billion so far, U.S. and Chinese companies are realigning supply chains and setting the stage for potentially huge shifts in the global trade landscape.

The trade conflict began July 6 of last year, when the U.S. started the cycle with a 25% charge on 818 Chinese imports. This led to a chain of retaliations by China and further punitive tariffs imposed by the U.S.  Although the two sides have resumed talks, they appear to be still far apart on key issues.

Trade between the two partners has suffered as a result. When examining how much exports of certain products dropped on the year once they became subject to a round of tariffs through April, the extent of the damage becomes clear.

Chinese exports to the U.S. of goods that were slapped with tariffs dropped 14% by a total of $18 billion, trade data shows. This was equivalent to 3% of China's total annual shipments to the U.S.

The duties of up to 25% now cover nearly half of American imports from China and 70% of China's imports from the U.S. 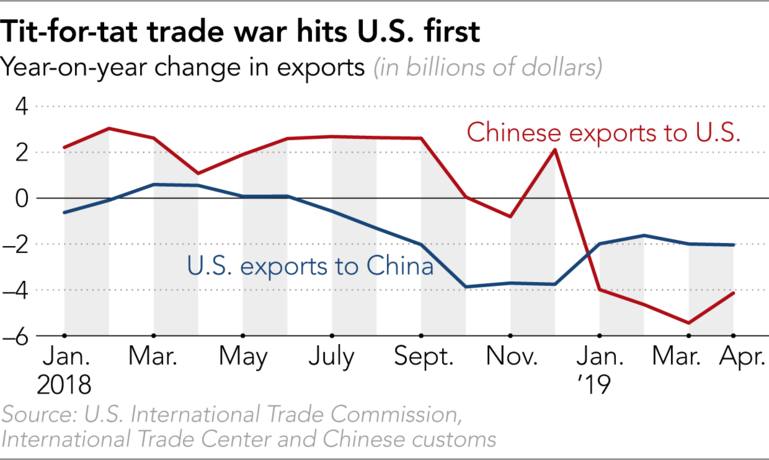 U.S. exports to China started shrinking soon after Beijing imposed tariffs on American goods in retaliation for U.S. President Donald Trump's move last July to slap punitive duties on a broad range of Chinese imports. By the end of the year, American exports to China were nearly $4 billion less than they were 12 months earlier.

Chinese shipments across the Pacific did not begin to sink markedly until four months later, with the amount of decline starting to surpass $4 billion in early 2019.

The lag can be explained by the different types of goods that the U.S. and China export to each other, according to Gary Clyde Hufbauer, a nonresident senior fellow at the Peterson Institute for International Economics.

Chinese tariffs were imposed mainly on U.S. agricultural products and fossil fuels that could be easily purchased from other countries, Hufbauer said. By contrast, much of China's exports to the U.S. are niche products that cannot easily be supplied by other countries at similarly low costs.

Beijing targeted mainly farm and fisheries imports from the U.S. in the first round of additional tariffs. It hit commodities, for which there are many alternative suppliers, in the second.

Chinese intermediate goods are incorporated into supply chains for almost all industrial products.

Materials sometimes go back and forth across the Pacific before making their way to the end user. Major U.S. chemical maker Eastman Chemical, for example, exports specialty materials for chip-proof plastic tableware to China, where the materials are molded into dishes, plates and other products for export back to the U.S.

Since the supply chain for specialty resins is highly specialized, it cannot be reorganized on short notice, according to Eastman Chemical CEO Mark Costa. Now that the tariffs are likely to remain in place, at least for the time being, exporters in both countries are under pressure to avoid them and keep costs down.

Paul Arling, CEO of U.S. Universal Electronics, says his company is adjusting to this reality. The U.S. company makes remotes for TVs and other products in China but had shifted half of this production to its plant in Mexico by the end of June.

Chinese manufacturers are also shifting production out of China. Major Chinese electronics maker Goertek, which assembles Apple's AirPods, has started building a plant in northern Vietnam at a cost of $260 million dollars.

As a growing number of Chinese manufacturers take steps to protect their operations from the tariffs, China may start feeling more pain.

Some nations are fearful of being pulled into the tariff vortex. Brazil's exports of soybeans and other oilseeds to China jumped 48% on the year.   © Reuters

In May, Francisco Turra, president of the Brazilian Animal Protein Association, received a phone call from the Saudi Arabian Embassy. The caller told him the Saudi government is worried that food exports from Brazil may decline because Brazil is boosting its food exports to China so rapidly.

The trade war has drastically altered the global farm trade landscape. Between last July and this past April, Brazil's exports of soybeans and other oilseeds to China jumped 48% on the year and Canada's exports jumped 52%, replacing more expensive U.S. oilseeds.

Some experts predict Brazil will newly devote 130,000 sq. km to farmland to meet China's soybean demand. That is equivalent to the size of Greece.

While U.S. exports of fuel, including liquefied natural gas, fell more than 50% after China imposed additional 25% tariffs, Saudi Arabia's fuel exports were up 51% and Russia's 40%.

As Washington and Beijing play tit for tat, many farm and resource-rich countries are aiming their exports at China's gigantic market.

Meanwhile, Vietnam, Mexico and South Korea are increasing exports of electrical equipment and machinery to the U.S., taking the place of tariff-hit Chinese suppliers. Vietnamese exports to the U.S. took a 20% year-on-year jump from July 2018 until April 2019, when the U.S. imposed the first round of tariffs on China.

"Vietnam is likely to benefit the most from the U.S.-China trade row," a Nomura Holdings analyst said.

But even here there is friction. Some market watchers say Vietnam's exports to the U.S. may include so-called "roundabout exports," in which China fakes the origin of products. U.S. President Donald Trump in late June hinted at imposing punitive duties on Vietnam if the country does not crack down on roundabout exports.