TOKYO/HONG KONG -- The Chinese yuan on Monday breached the politically sensitive level of 7 yuan to the dollar, its weakest in more than a decade, in a sign of mounting anxiety over worsening trade tensions and as Asian companies appear to be bearing the brunt of the Sino-American spat.

The yuan's weakness followed President Donald Trump's threat last week to slap additional tariffs of 10% on $300 billion worth of Chinese imports. It underscores nervousness about the impact of the trade war on global growth.

In the April-June quarter, net earnings of Asian companies plunged more than 20% in the first profit decline in two quarters, according to a survey by Nikkei.

Toru Nishihama, chief economist at Dai-ichi Life Research Institute, warned that the weaker yuan would negatively affect Asian economies, and some investments could retreat back to the U.S.

"Investments would still be directed toward countries such as India and Vietnam" but "it would be difficult to get returns unless the global economic conditions improve," he said.

While the yuan and South Korea's won weakened, currency investors sought safety in the Japanese yen, which strengthened almost 1% to more than 105 yen per dollar.

Market analysts suggested Beijing, which has in the past denied manipulating China's currency for competitive advantage, might have resisted the temptation to intervene to support the yuan as market forces were pushing it down.

"We have had a view that generally going beyond 7 for the yuan is just a matter of time," said Cliff Tan, East Asian head of markets research at Japan's MUFG bank in Hong Kong, in an interview with Reuters. "Given liquidity is low because of Hong Kong, it gave markets a good excuse to push beyond 7. The key is that we have broken 7 and the authorities could have come in the way, but they didn't."

Stock prices across Asia were also weaker on Monday amid the heightened U.S.-China tensions and other geopolitical concerns such as Japan's clampdown on exports to South Korea.Japan's Nikkei average fell to 20514.19 in mid-day trading, down by 2.79% from the previous close. South Korea's Kospi dropped by 2.3%, while India's Sensex fell by 1.7%. Indonesia JSX fell by 1.7%. Shanghai's SSE Composite Index was about 0.9% weaker in midday trading and Hong Kong's Hang Seng index was down by about 2.7%.

Koji Sako, senior analyst at Mizuho Research Institute, said that exports of Asian countries will continue to be affected by the trade war. Tariffs would affect investment, and capital expenditures are expected to slow, he added.

"It is up to how much domestic demand could offset [the negative impact of export]," he said, referring to efforts such as the Chinese government's move to cut tax rates.

Meanwhile, global corporations are feeling the pain of the U.S.-China spat. Their net profit fell 2% from a year earlier, according to a Nikkei tabulation of results at 10,850 companies, drawing on data from QUICK FactSet and others. Financial institutions were excluded.

By region, profit fell everywhere with the exception of the U.S.-Canada area. In Asia, net profit sank 21%, down for a third straight quarter, while China experienced a 1.3% slide, the first decline in two quarters. 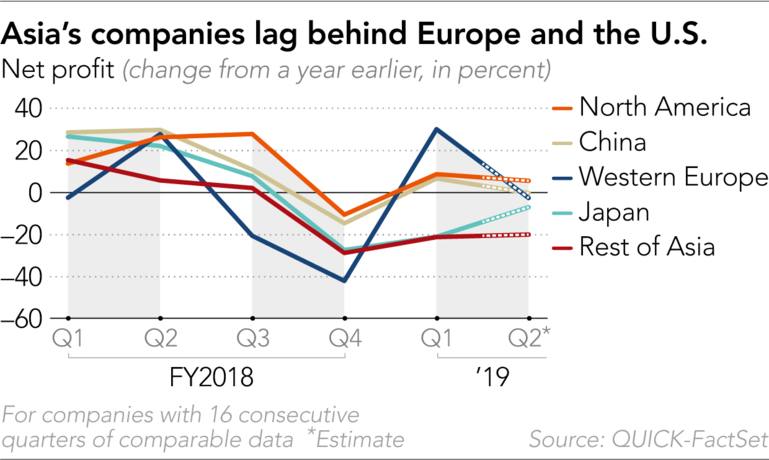 The trade war has dealt a direct blow to the chip and auto industries, many of which are based in Asia.

Net profit plummeted around 50% at chip-related businesses in Asia, largely in South Korea and Taiwan. Samsung Electronics' net earnings fell by half partly due to lower prices for memory chips used in servers and other equipment. The South Korean company's bread-and-butter chip business logged a 71% profit decline. Asia is home to many of the world's leading chip-related businesses. For example, South Korea's Samsung and SK Hynix together control about 70% of the global market for DRAMs. Electronic devices, which include semiconductors, account for 18% of the total net profit earned in Asia.

The automobile market slump is also hitting returns in Asia. New-vehicle sales in China, the world's biggest market, were down on the year for 12 straight months through June. And sales have fallen below year-earlier figures in India, the fourth-largest market.

Chinese automaker Zhejiang Geely Holding Group said on July 8 that net profit for the first half likely fell about 40%. It also lowered its sales target for the year around 10%.

At India's Tata Motors, the red ink doubled to 36.8 billion rupees ($528 million). While South Korea's Hyundai Motorsecured a profit increase, its sales sank by 35% and 8% in China and India, respectively.

Meanwhile, companies in the U.S. and Canada reported a 3.8% profit gain. Information technology businesses were the driving force, with their profit up 25%. IT giants Google, Apple, Facebook and Amazon.com together generated net profit of about $25 billion, or almost 10% of the total for the region. When IT companies are excluded, net profit rose just 1%.

With the U.S. having decided to impose another round of tariffs on Chinese goods in September, corporate earnings around the world will likely weaken further.