After signing, focus turns to ratification; China to hold sway in India's absence 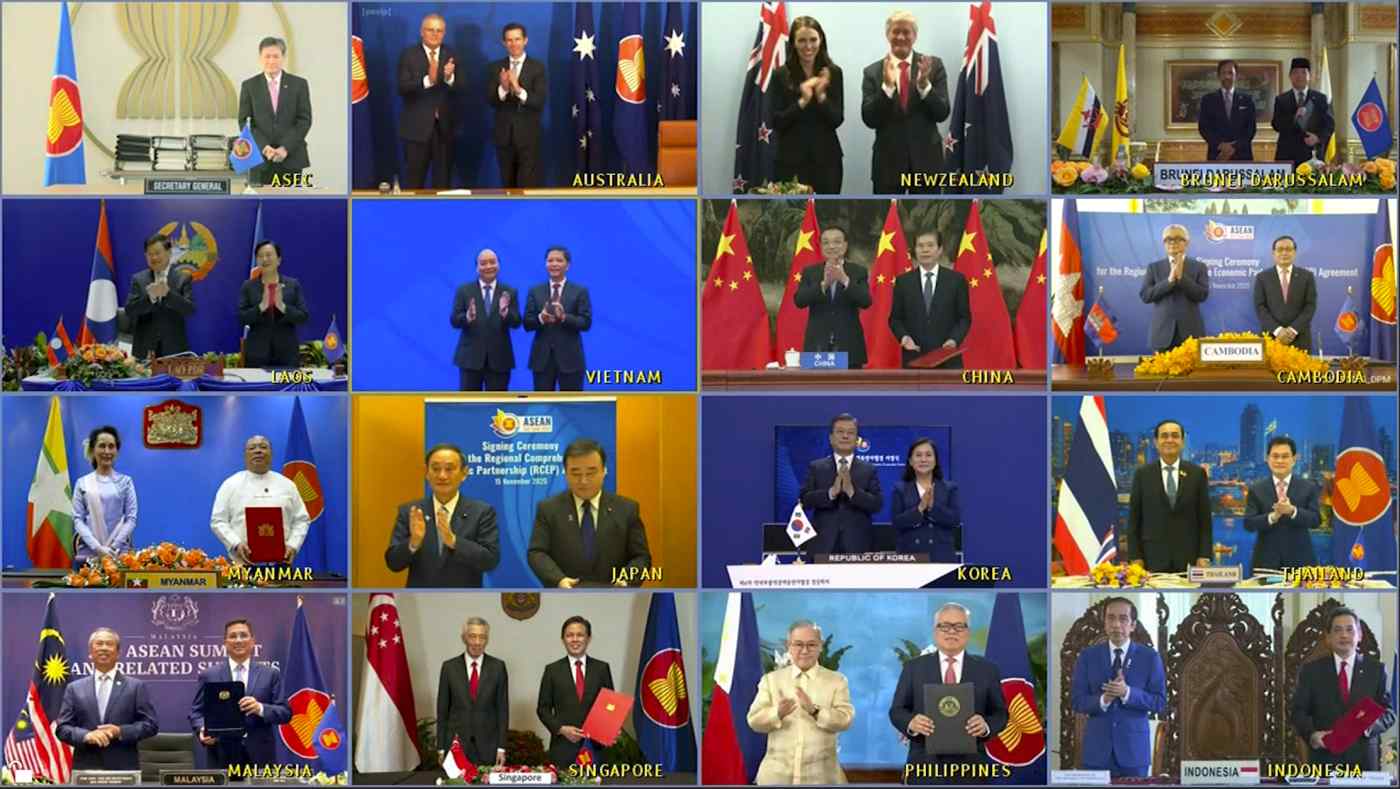 The 15 countries are China, Japan, South Korea, Australia and New Zealand, along with the 10 members of the Association of Southeast Asian Nations. Together, they account for around 30% of the world's gross domestic product and population.

This marks the first time China enters a nonbilateral free trade agreement of this scale. Coming at a time when the U.S. is less enthusiastic about joining global trade deals and talks on a post-Brexit trade deal between the European Union and the U.K. stall, Asia looks to take the lead in shaping the new global trade architecture.

The newly signed free trade framework extends beyond trade to set common rules and standards for a range of economic activitiy.

Sunday's signing ceremony was held online, hosted by this year's ASEAN chair Vietnam. With national leaders looking on, economic ministers from the 10 members of the Southeast Asian bloc signed in alphabetical order, followed by the five other countries. They held up their documents for the other participants to see over the video feed, each drawing applause from an audience in Hanoi.

"I am confident that RCEP will soon be ratified and come into force, further bolstering our post-pandemic economic recovery and delivering shared prosperity to the people and businesses of all participating countries," Vietnamese Prime Minister Nguyen Xuan Phuc said after all countries signed.

RCEP was officially proposed in 2012, and the talks had dragged on since 2013. Progress was especially slow in the early years, but the discussions gained momentum after Donald Trump became the U.S. president in 2017. Amid a growing trend of protectionism, the participating governments became more motivated to promote free trade.

An exception was India, which was initially involved in the negotiations but withdrew last year, as it was reluctant to open up its agricultural and other key sectors.

The agreement, which the members described as "modern, comprehensive, high quality, and mutually beneficial," includes 20 chapters of rules covering everything from trade in goods, investment and e-commerce to intellectual property and government procurement.

The deal will eliminate tariffs on a wider range of goods flowing between the participants, while ceilings on foreign shareholdings will rise in more service industries, such as professional services and telecommunications. The e-commerce chapter aims to enhance consumer protection and safeguard personal information, as well as promote acceptance of electronic signatures.

This marks the second big multilateral trade deal for Asia, following the Comprehensive and Progressive Agreement for Trans-Pacific Partnership, or CPTPP -- the 11-member version of the TPP, forged after Trump pulled the U.S. out. Seven of the 15 RCEP members belong to the CPTPP as well.

Some members are also already linked by bilateral free trade pacts, such as the one between ASEAN and China. RCEP can thus be seen as a framework joining together existing deals.

But in some respects, the pact also brings historic breakthroughs. 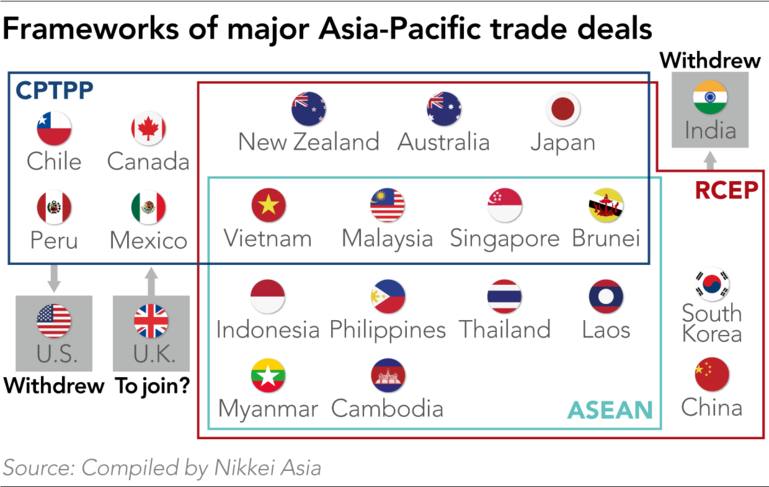 For China and Japan -- Asia's largest and second-largest economies -- RCEP is the first free trade agreement to connect them. Tariffs on 86% of Japanese goods exported to China will be eliminated, up from the current 8%. This promises big benefits for Japanese manufacturers, such as automobile parts suppliers.

The global health crisis only adds to the gravity of the moment.

The signing came as the world economy continues to suffer from the chilling effects of COVID-19. While China, South Korea and Vietnam have shown quicker recoveries, many Asian countries continued to record economic contractions in the July-September quarter. So on Sunday, members expressed hope that RCEP would play a key role in the region's long-term recovery and prosperity.

"The signing of the RCEP agreement is a timely boost to the long-term prospects of the region," Singapore's Trade and Industry Minister Chan Chun Sing told reporters on Sunday. "It will be a bright spot that points to the direction ahead."

He said Singapore will ratify it "very soon, in the next few months."

Malaysia's International Trade and Industry Minister Azmin Ali said in a statement: "Undoubtedly, it represents a significant and imperative milestone in the integration and revitalization of economies of the 15 parties."

Philippine Trade Secretary Ramon Lopez told reporters on Saturday that RCEP "offers wider market opportunities for our exporters and service providers." He added that RCEP countries account for more than 50% of the Philippines' export market.

An analyst who spoke with Nikkei Asia agreed that the deal is significant -- particularly given the prolonged impact of COVID-19 and the uncertain aftermath of the U.S. presidential election.

"Trade is an important driver of growth for RCEP members," said Cassey Lee, a senior fellow at Singapore-based think tank ISEAS-Yusof Ishak Institute. While economic recoveries will be slow for many countries, he said, the deal will give signatories more trade and investment opportunities.

"This will put these countries in a good position to leverage and mutually reinforce their economic recovery together in the future," Lee said. 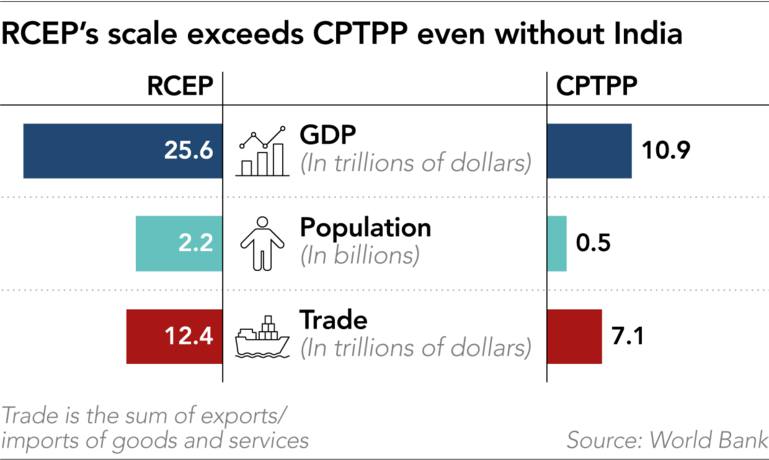 Chinese officials have been pushing for multilateral deals in the past few months, illustrated by a number of high-level meetings, both physical and virtual. Beijing has also vowed to further open up trade and investment as it aims to become a "high-income country" by 2025 and a moderately developed economy by 2035.

"We will continue to reduce the negative list that bars foreign investment access," Qian Keming, China vice minister of commerce, told a forum on Thursday. He went on to say that multinational companies will be encouraged to participate in high-tech sectors and development projects in China's less-developed central and western regions.

Beijing also hopes RCEP will provide an impetus for other multilateral deals currently in the works, including a China-European Union investment treaty and a China-Japan-South Korea free trade agreement.

Without India, China is the biggest RCEP participant by far, both in terms of GDP and population. It looks poised to wield plenty of clout in the bloc as a result -- a factor that apparently made some governments reluctant to go ahead if New Delhi could not be enticed.

"Japan at first said it didn't want to sign if India is not there because RCEP becomes too China-dominant without India," one ASEAN diplomatic source said on condition of anonymity. "But now it said yes, because there is no choice."

The 15 members formally left the door open for India to join later. Japanese Prime Minister Yoshihide Suga said at Sunday's RCEP meeting that Japan will take a leading role in working to bring the South Asian country into the fold.

Indonesian President Joko Widodo said that the signing was only the beginning, adding that the members still have to make efforts to implement the deal. "This also requires political commitment at the highest level," Widodo said. "For Indonesia, we still open opportunities for countries in the region to join this RCEP."

Yet, the odds of India ever joining are hard to gauge.

"As far as India is concerned, we did not join RCEP as it does not address the outstanding issues and concerns of India," Riva Ganguly Das, a secretary in the Ministry of External Affairs, said during a virtual media briefing on Thursday. "However, we remain committed to deepening our trade relations with ASEAN," she added without elaborating.

Separately, former Indian Foreign Secretary Kanwal Sibal tweeted on Saturday that the RCEP signing is "most inopportune." He said this "Signals countries not only can't delink themselves from China but [are] ready to deepen [economic] links" with it.