A midsize hotel in Guangzhou: Business is suffering at hotels and restaurants in the city because the Canton Fair is being held virtually. (Photo by Yusuke Hinata)
YUSUKE HINATA, Nikkei staff writerApril 16, 2021 02:15 JST | China
CopyCopied

Local businesses missed another chance to host the 200,000 international buyers who descended on the city twice a year before the coronavirus pandemic.

When the Canton Fair was held in person, Chinese manufacturers of machinery and household goods typically signed deals worth $30 billion with customers visiting from around 200 countries. These fair attendees crowded local hotels, sending room rates soaring. But as this spring's trade show kicked off, big crowds were nowhere to be found in Guangzhou, the southern port city once known as Canton in English.

"We cannot dare raise our rates," said a reservation specialist at a midsize hotel, noting that guests once were charged about $90 a night -- more than twice the normal price -- during busy exhibition times.

Sales at Guangzhou hotels and restaurants totaled 6.7 billion yuan ($1.03 billion at current rates) during the digital Canton Fair in October, down 40% from the last in-person exhibition in October 2019.

"Usually, we would be packed with foreign visitors starting a few days before the fair's opening," a bar owner said. "There's nothing we can do when the fair is virtual." 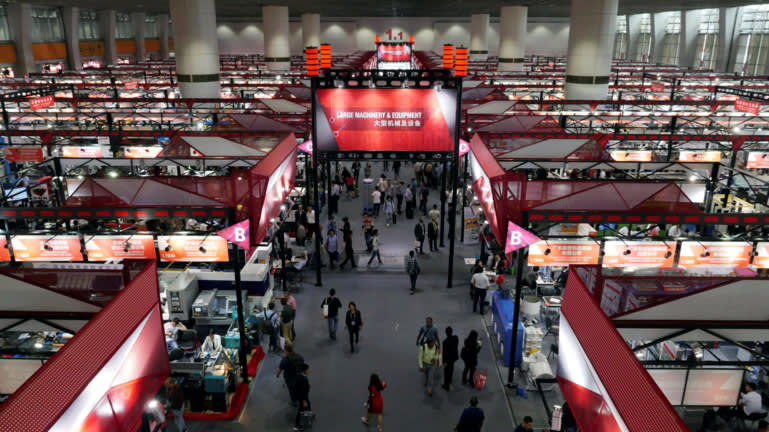 The Canton Fair held in October 2017. Before the COVID-19 pandemic, hundreds of thousands of buyers would attend from around the world.   © Reuters

Vendors also are unhappy with the online format.

"Even though hundreds of thousands of people watched our product videos, we inked deals with just several people last time," one exhibitor said.

The organizers of the Canton Fair, or China Import and Export Fair, are working to make the experience as meaningful as possible. This time, product pages can be shared on social media by a simple click.

"We have improved the online platform to enhance the convenience of both vendors and buyers," said an official at the China Foreign Trade Center, which oversees the exhibition.

The typical schedule calls for the next Canton Fair to be held in October. Organizers have not announced whether it will return to the in-person format.