From Indonesia to India, exporters face a battle to make up for lost business

SYDNEY -- Australian exporters face a difficult hunt for new markets as tensions with China reach a precipitous point, hurting businesses on both sides.

China has either slowed or stopped imports of Australian cotton and coal in recent weeks. That is on top of hefty tariffs imposed on Australian barley and a ban on beef from five major Australian producers. The Asian giant is also looking into putting levies on Australian wines.

While Australia's relationship with its No.1 trading partner has been on thin ice since 2017, tensions escalated rapidly earlier this year after Prime Minister Scott Morrison called for an international inquiry into the origins of COVID-19. Agricultural commodities -- worth an annual 13 billion Australian dollars ($9.25 billion) -- have suffered the biggest collateral damage as a result.

"What China is doing is firing off different shots and trying to see how much punishment Australia is willing to take," said Naoise McDonagh from the University of Adelaide's Institute of International Trade. "It's 'feeling the stones' as the expression goes, to suss out how much leverage it can generate."

The trade spat comes at a tenuous time for Australia's AU$2 trillion economy, which is battling its first recession in nearly 30 years, brought on by the coronavirus pandemic.

The tensions have spurred many Australian businesses -- hitherto content to sell into the world's second biggest economy -- to start seriously developing new markets from Indonesia to Vietnam, Bangladesh and India.

But the path is arduous.

"There's no other market out there that can replace China," said professor James Laurenceson, director of the Australia-China Relations Institute at the University of Technology, Sydney.

"We will try to diversify as much as we can but in the end, you can't replace it with a similar large economy because one simply doesn't exist." At stake is annual trade worth more than AU$250 billion. This has been the bedrock of Australia's prosperity, with China becoming the biggest buyer of its minerals and agricultural commodities while also boosting its tourism and education sectors.

Farmer Andrew Weidemann estimates losses of around AU$300,000 on the 6,000 tons of barley grown at his property in the southeastern state of Victoria, as prices slid after China slapped an 80% tariff on Australian barley in May.

He said the sector will see the full impact next year, because growers will have to take the difficult decision of whether to plant barley in the coming months.

Grain producers are looking to India and Indonesia as alternative markets for barley, but Weidemann reckons it might take at least two to three years before this begins to pay off.

Cotton producers are in the same boat.

Exports worth about AU$800 million annually are at risk after authorities in China -- which buys 60% of Australia's cotton -- discouraged spinning mills from using the material.

Cotton Australia CEO Adam Kay described China's curbs as a "good wake-up call," saying suppliers will have to work hard over the next six months to divert their high-quality produce to other Asian markets like Vietnam, Bangladesh or Thailand, albeit at a lower price.

Last year, Australia signed a free trade agreement with Indonesia. It is discussing separate full-fledged deals with the 27-member European Union as well as the U.K., though negotiations are likely to be drawn out over a number of years.

Economists say diversifying will significantly increase businesses' costs. And if competitors do not diversify, the market would force everyone to stay concentrated on China.

"Market diversification is a priority, but it's not that somehow we put all our eggs in the Chinese basket, it's just that the Chinese have proven themselves to be very good customers," said Ash Salardini, chief economist at the National Farmers' Federation, an industry lobby group. 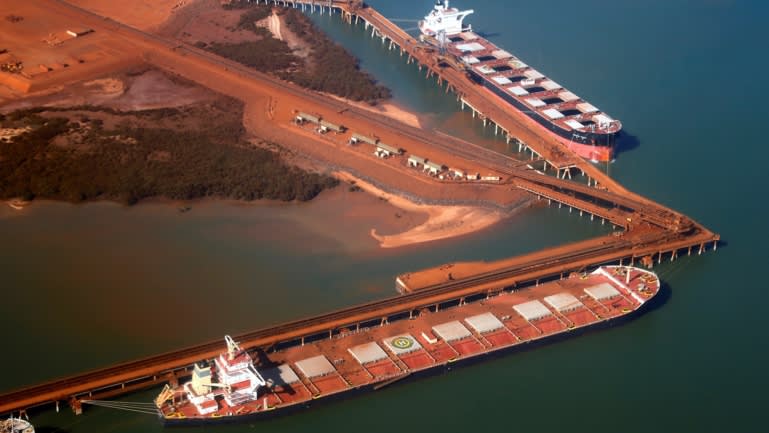 Ships wait to be loaded with iron ore in Western Australia: Some are hoping the rift with China will resolve itself.   © Reuters

Indeed, Australia signed an FTA with China in 2015 and despite friction between them, the bulk of Australia's exports -- comprising iron ore, coal and natural gas -- have continued to grow.

In a worrying sign, though, Trade Minister Simon Birmingham earlier this month said Australia had sought ministerial dialogues with China on multiple occasions this year, but in vain.

Experts say the Australian government must be ready to provide near-term support to the sectors hit hardest by the trade spat but also incentivize longer-term diversification of markets or supply chains.

Others hold out hope that the rift will resolve itself, without hitting major commodities. They cited the example of China's strong trade ties with Japan, which have survived despite territorial disputes and often-tense political relations.

"For China, there's no replacement in terms of quality and security of supply in relation to some of the big imports from Australia," said Adelaide University's McDonagh.

"It's not going to cut off its hands to spite its nose."