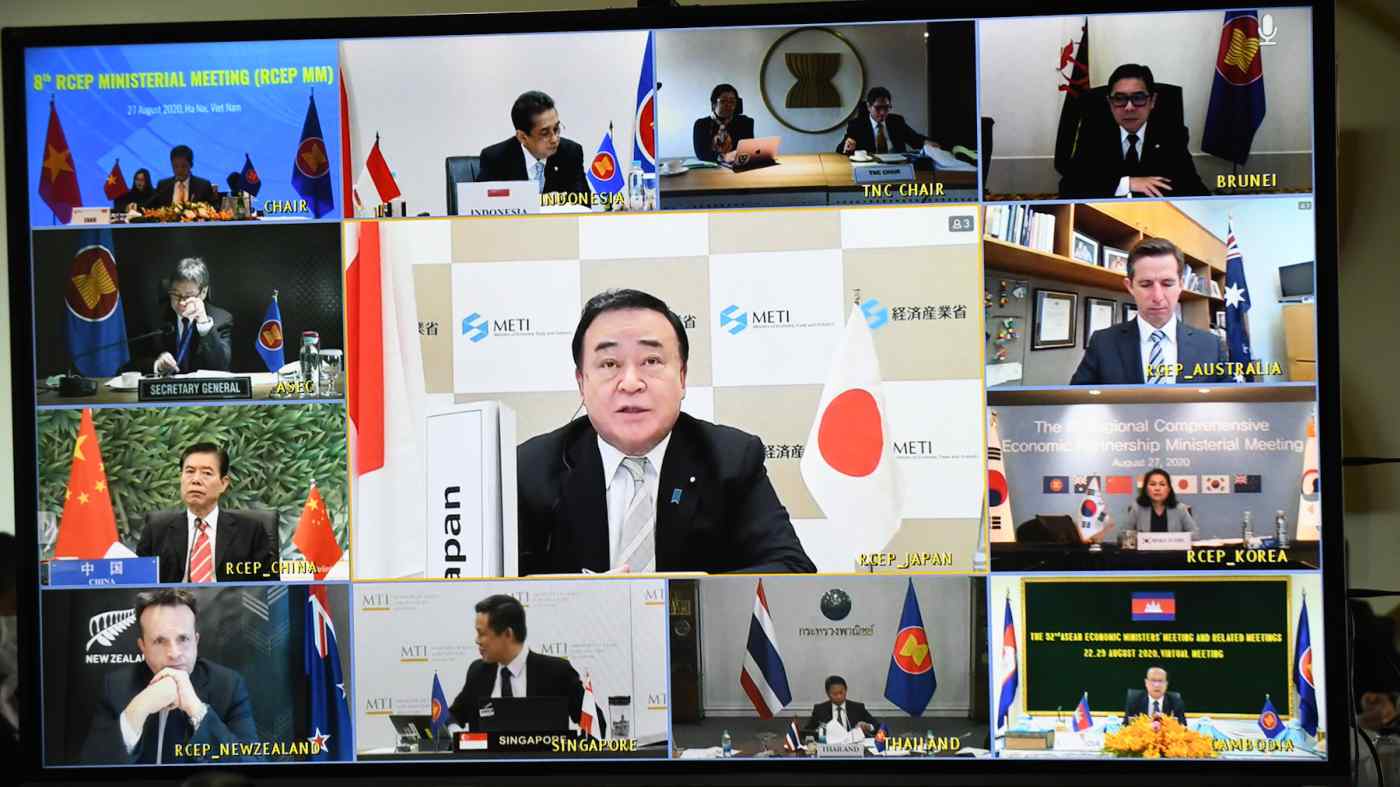 JAKARTA -- Economic ministers from the 15 nations seeking to forge the Regional Comprehensive Economic Partnership met online on Thursday and reiterated that the door open for India to rejoin the nascent Asian free trade zone, as they look to revitalize economies ravaged by COVID-19.

But with member states aiming to sign a deal at a summit in November, the huge trade pact is likely to be finalized with world's third most populous country looking on from the sidelines.

The members of RCEP -- China, Japan, South Korea, Australia, New Zealand and 10 Association of Southeast Asian Nations -- said in a joint statement on Thursday that the group "remains open for India, given that not only had it participated in the RCEP negotiations since they were launched," but "also in recognition of the potential of India to contribute to the region's prosperity."

The statement added that they were "pleased with the significant progress made towards finalizing the RCEP Agreement for signing at the fourth RCEP Summit in November 2020."

"The ministers acknowledged that the unprecedented challenge brought about by the COVID-19 global pandemic had affected the trade and investment performance," it said, adding that signing the agreement would boost business confidence and maintain the stability of the global supply chain.

"The ministers also underscored the significant role that the RCEP Agreement could play in post-pandemic recovery efforts, as well as in contributing to the growth and stability of the regional and global economy," the statement said.

ASEAN leaders originally proposed the idea of RCEP in 2012, talks began the following year, but the members have missed multiple deadlines.

India had been accused of delaying the agreement in previous negotiations, and it ultimately pulled out last year amid concerns that the pact would hurt its domestic producers. The country of 1.3 billion people was absent from the previous RCEP ministers meeting on June 23, which was also conducted online, and did not join this time around.

A RCEP with India would encompass about half the world's population and around one-third of global gross domestic product. According to 2016 an estimate by the Asian Development Bank, a successful RCEP pact would provide global income benefits of about $260 billion.

Without India, the new bloc will be much smaller than envisioned, covering 2.2 billion people and accounting for 29% of world GDP.

China previously floated the idea of RCEP without India, but others, notably Japan, are against leaving India out. The basic idea of RCEP, for these members, is to create a trade deal that spans the Asia-Pacific region and avoids creating an economic zone that could become increasingly centered on China.