Japan adds to free-trade trophy chest with speedy US deal

TOKYO -- Japanese consumers will be able to buy American tenderloin steaks at a slightly cheaper price next year thanks to a new trade deal with the U.S. ratified by parliament on Wednesday.

Cheaper U.S. beef is just one benefit Japanese people will enjoy as their government embraces free trade. With the latest trade pact with Washington, the share of Japan's trade covered by such agreements will rise to more than half of the total for the first time.

Signed by Prime Minister Shinzo Abe and President Donald Trump on Oct. 7, the deal moved quickly through the Japanese legislature despite a lack of tariff cuts in Tokyo's main priority: autos.

When it takes effect on Jan. 1, the proportion of Japan's trade with the world that falls under economic partnership agreements, or EPAs, and similar pacts will reach roughly 52%, up from about 37% now.

Goods that will benefit include U.S. beef and wine and Japanese-made lithium-ion batteries, glasses and air conditioner parts.

Tokyo does not consider the Japan-U.S. trade deal an EPA because its narrower focus covers mainly goods, leaving out services and other areas.

Yet Foreign Minister Toshimitsu Motegi, a key architect of the deal, ranked it alongside the larger and more comprehensive Trans-Pacific Partnership and Japan's European Union agreement in significance. 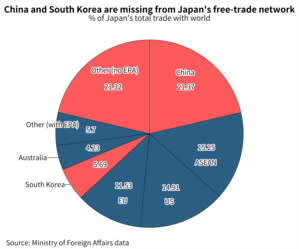 Together, they "will give birth to a free economic zone covering about 60% of the global economy," Motegi said Wednesday.

Notably absent from this zone are neighbors China and South Korea. Negotiations on a three-way EPA are in their final stage, as are talks on the 16-nation Regional Comprehensive Economic Partnership, a megadeal that also includes India, Southeast Asia, Australia and New Zealand.

EPAs have formed a pillar of Japan's trade strategy since an agreement with Singapore took effect in 2002. Even after reaching 52% covered trade, Japan will lag behind South Korea, which stood at roughly 68% as of March, but it will surpass China's 38% and the EU's 36%.

The U.S. deal will eliminate tariffs on 92% of American goods by value and 84% of Japanese exports. But these figures include automobiles and auto parts, despite the sides yet to strike an agreement on those exports.

Japan will seek to eliminate U.S. automotive tariffs in the next round of deliberations, and Abe has said the deal provides for negotiations to that end.

For the Trump administration, top priorities in the next round of talks include freeing up Japan's telecom, finance and other services markets, as well as currency issues. Some observers say the phase two negotiations will not begin in earnest until after the November U.S. presidential election.

Once the deal takes effect, Japanese consumers should see the impact at their local supermarket. Japan's tariff on U.S. beef will be cut in stages from the current 38.5% to 9% eventually.

Assuming no currency factors, wholesale prices of U.S. tenderloin should fall by about 250 yen ($2.30) per kilo from the current range of 3,700 yen to 3,800 yen, a trading house import manager said.

Meanwhile, Japanese manufacturers seeking to benefit from the trade deal must clear procedural hurdles, such as verifying that their goods are made in Japan.

"Many companies will be unable to take full advantage of the deal because the are unable to meed the organizational demands on compliance," said Keisuke Hanyuda, a partner at Deloitte Tohmatsu Consulting in Tokyo.