BANGKOK -- Brunei Darussalam, the Association of Southeast Asian Nations' rotating chair for this year, has struggled under the overly cheerful banner "We care, we prepare, we prosper."

Its stint at the helm ends with the unprecedented exclusion of the Myanmar military leadership from this week's transitional three-day summit, following months of bloodshed. And few ASEAN members have "prospered" in the COVID-19 pandemic this year, after mostly fending off 2020's much milder early waves.

But despite the gloom -- and further complications expected in 2022 as the chair shifts to Cambodia, which considers Myanmar's crisis a domestic affair and is widely perceived as Beijing's wedge in South China Sea disputes with several ASEAN states -- the Organization for Economic Cooperation and Development is upbeat.

The OECD sees a multibillion-dollar opportunity for ASEAN if countries do what it takes to fulfill the grouping's preeminent role as a trading bloc.

The short answer of what that entails is better logistics. A longer answer can be found in two technical reports on competitiveness, logistics and small package deliveries released on Sept. 9 at the virtual 53rd ASEAN Economic Ministers Meeting (AEM).

The OECD recommends full implementation of a 16-year-old ASEAN agreement on multimodal transport that Brunei, Malaysia and Singapore have yet to ratify. It also suggests a single documentary framework and steady relaxation of quotas and licenses to ease cross-border shipments; phasing out minimum capital requirements that companies seldom fill and that offer little security to consumers; greater use of insurance contracts; more foreign direct investment with screening mechanisms to address national security concerns; and reduction of cabotage restrictions that limit domestic shipping to local companies.

Cabotage restrictions mean, for example, that imports entering Malaysia that require shipping to another Malaysian port can only use a local vessel, causing delays and unnecessary costs. Logistics on average account for about 5% of gross domestic product across the bloc, and in some countries make up 20% of the final price of goods.

Thailand and Singapore proposed the ASEAN Free Trade Area (AFTA) at a summit 30 years ago. It was officially implemented in 1993, and has gathered momentum this century. In November 2020, ASEAN signed the Regional Comprehensive Economic Partnership (RCEP), the largest free trade agreement ever, as it involves nearly a third of the world's population.

But researchers analyzed 500 pieces of standing legislation within ASEAN and identified hundreds of badly needed reforms.

Partly because of the pandemic's dire impact, OECD experts are optimistic that at least some of the advice will be heeded. As Winston Churchill may -- or may not -- have said in the mid-1940s: "Never let a good crisis go to waste."

"There was always cooperation from the 10 ASEAN countries but it was not clear that the top echelons of government were completely on board" with the studies, Ruben Maximiano, an OECD senior competition expert, told Nikkei Asia. "As time went by -- and particularly as COVID-19 hit -- we found renewed interest in our work."

Maximiano sees "quite a lot of buy-in for implementing regulations."

"It is too early to say how many or where they will start, but we have a number of recommendations that we are quite confident will actually be implemented," he said. "We have also seen renewed interest in the OECD helping with implementation."

The OECD values potential benefits from reduced freight costs, greater competition and increased trade at $4.5 billion per annum -- about 1% of regional GDP. But many believe the actual figure could be three times higher if knock-on effects -- like secondary employment, efficiency gains and higher tax takes -- are factored in.

Maximiano noted that only four ASEAN members were able to supply data to generate the $4.5 billion estimate. He prefers to place it in the context of being almost one-sixth of ASEAN's $31 billion annual investment in infrastructure. "That makes it more vivid than comparing it to GDP," he said.

According to another close observer of ASEAN competition, improving logistics by adjusting the regulatory environment costs almost nothing, and this is immensely attractive to governments drained by costly stimulus packages.

"Governments are pretty cash strapped, and this is the kind of lubricant that allows the private sector to step in and get things done without big infrastructure spending, which nobody can afford unless they want to wind up in a Belt and Road Initiative debt trap," the observer told Nikkei.

Adding urgency are structural problems inhibiting trade amid the pandemic, especially severe shipping capacity shortages. "Ports worldwide are all having massive problems," a freight forwarder in Bangkok said. "The cost of sending a 20-foot container from China to Cambodia has basically tripled if not quadrupled in price. There is a shortage of containers coming out of China because there is nowhere for them to go. I don't think this is going to sort itself out anytime soon, and the trade wars are just going to make things worse."

Overland transportation has also been affected. Trucks at the Thai-Cambodian border have been unable to cross with the same driver due to virus concerns. "Before COVID, the drivers could drive through, no problem," a logistics expert in Bangkok said. "Basically, it would be two weeks' quarantine coming back as well, which means a driver gone for a month, and that's not viable."

Even without the coronavirus, progress has always been challenged by the unequal economic development of ASEAN members. Singapore ranked seventh globally in the 2018 Logistics Performance Index of the World Bank, followed in ASEAN by Thailand at 32nd. The worst performing member in a field of 160 was Myanmar at 137th -- and it will have plummeted this year. 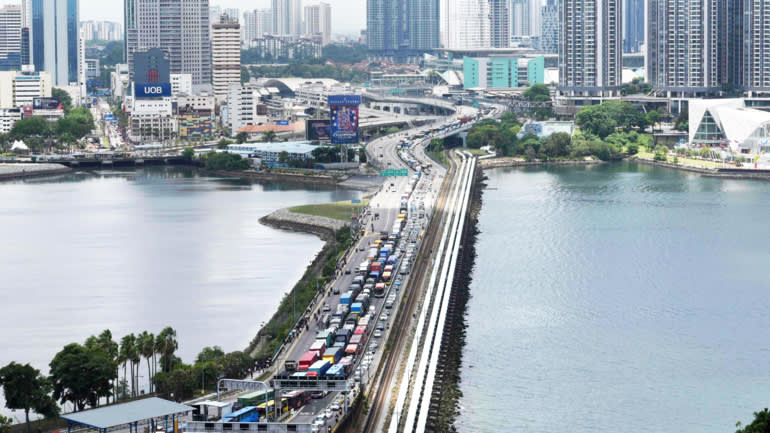 Vehicles wait to cross from Malaysia into Singapore before a border closure in March 2020: The pandemic has only added to Southeast Asian logistics challenges.   © AFP/Jiji

The OECD avoided such comparisons, preferring to focus instead on best practice solutions. "We didn't compare countries in terms of worst or best," Maximiano told Nikkei. "That sort of analysis would have been a no-go for us."

A logistics expert in mining and engineering projects was more forthcoming. "Singapore is one of the best places in the world, but look at the likes of Thailand, Cambodia, even Vietnam," he said. "Bureaucracy drives you up the wall -- it is the same as Africa. Lots of stamps and paperwork. If you want to get past it, you just have to pay someone. Corruption in Cambodia is 100%. Nothing happens there unless you know the right people."

A senior member of the Joint Foreign Chambers of Commerce in Thailand observed: "If it's tea money -- paying them to do something they would do anyway with time -- that is not the biggest concern. The bigger concern is paying for a contract, not to prosecute somebody or something similar."

Maximiano conceded that "if you don't have a clearly defined regulatory framework, that leads to intransparency and that might lead to 'business risks,' to put it euphemistically." He said the OECD's research did not look at corruption, but "looked at the practical application of the rules and regulations, and we did that by widening our net beyond policymakers and contacting private entities, associations and so on."

"Competition is not a luxury," he continued, speaking from his Paris office. "It is something that cannot be overlooked -- particularly at this moment in time. For COVID recovery, you need roads and ports to be working as well as possible.

"ASEAN is built on trade and commerce, and that is the main engine of its phenomenal growth. Logistics are the bottom of the pyramid that is needed for all that commerce to happen."