MANILA -- The Philippines is prodding the World Trade Organization to let it retaliate against Thailand over a decadelong tobacco customs dispute, as simmering trade tensions between the two nations start to boil over.

Citing an appeal lodged at the WTO's currently nonfunctional Appellate Body, Bangkok blocked Manila's bid to put retaliation on the agenda of the WTO Dispute Settlement Board for its Feb. 28 meeting in Geneva.

The Philippines hit out at Thailand's "tactics" on Monday while expressing confidence that the trade body will uphold Manila's rights when the meeting resumes on March 5.

"It is time to say that enough is enough," Philippine Trade Undersecretary Ceferino Rodolfo said in a statement on Monday. Asked by the Nikkei Asian Review if Manila would retaliate sans WTO approval, Rodolfo said: "We do not want to preempt what the WTO will or will not do."

According to United Nation's trade statistics, the Philippines is Thailand's second-largest tobacco supplier. 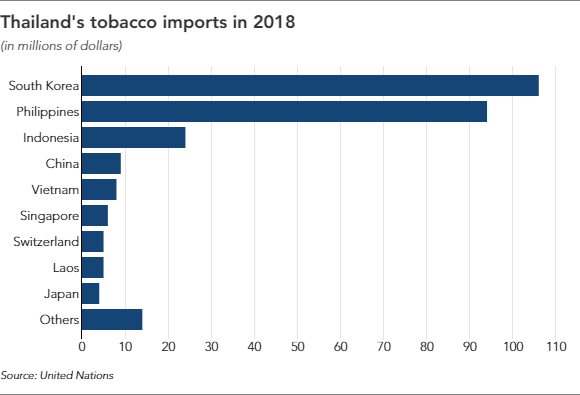 In 2008, the Philippines filed a WTO complaint against Thailand's customs valuations, which Manila claims discriminate against tobacco imports to protect Thailand Tobacco Monopoly, a state-run company.

Manila won the case in 2010 and subsequent appeals, including one last year.

Thailand then went to the Appellate Body -- WTO's de facto supreme court -- which has been paralyzed since December after the U.S. blocked new appointments to replace retiring judges. The seven-member body, which needs at least three members to convene, has been reduced to one.

"We cannot let the impasse in the WTO impair our substantive rights," Rodolfo said. "Hence, we have sought authorization to already retaliate." Manila may impose duties on imported cars, including vehicles from Thailand. (Photo by Kosaku Mimura)

The increasingly strained trade relations between the Southeast Asian neighbors comes as the Philippines is considering the imposition of safeguard duties on imported cars to protect its local auto industry.

One such duty will hit Thailand, a big car exporter to the Philippines. The duty is separate from the planned retaliation, which will also likely center on car imports, a Philippine trade official told Nikkei.