Progress made on e-commerce at CPTPP meeting in Singapore SINGAPORE (Kyodo) -- Members of a trans-Pacific free trade pact could agree in principle to allow Britain to join as a new member this year, using the European country's case as a model for future aspirants, Japan's economic minister Daishiro Yamagiwa said Saturday.

Yamagiwa said at a joint press conference, following a ministerial meeting in Singapore of the regional trade deal, he believes that based on the views of some members, there could be a basic agreement "perhaps within this year."

The process of Britain's accession to the 11-member pact, formally known as the Comprehensive and Progressive Agreement for Trans-Pacific Partnership, "will be a good precedent" in meeting the high standards for trade rules and transparency, said Yamagiwa, minister in charge of economic revitalization.

The one-day meeting discussed Britain's entry into the CPTPP, or the acronym for the regional free trade deal. Japan is chair of a working group on Britain's envisaged membership.

The country applied for accession in February last year, and a few months later, the CPTPP Commission, the group's top decision-making body, agreed to formally commence negotiations with Britain. 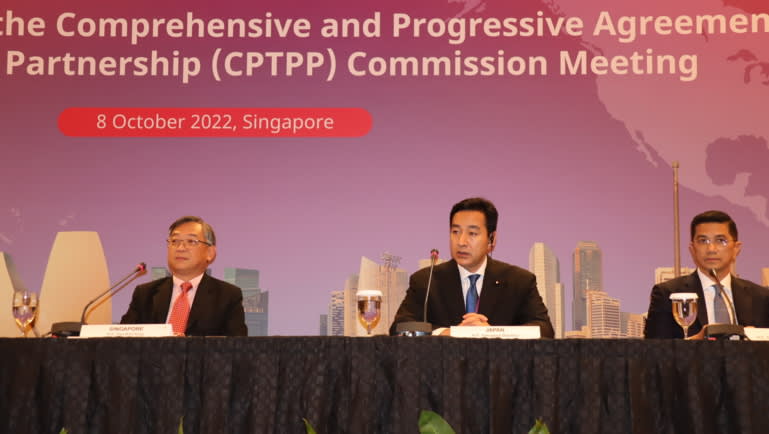 "Our energies are focused on getting the accession of the United Kingdom completed, this will serve as a pathfinder," Singapore Trade and Industry Minister Gan Kim Yong said at the same press conference.

Gan said at outset of the meeting that five countries have expressed interest in joining the CPTPP, without naming them.

But asked later on whether other applications, such as from China, Taiwan, Ecuador and Costa Rica, had been discussed, he said, "We did not discuss economy-specific applications."

In September last year, China, the world's second-biggest economy, filed its bid to join the pact, in an apparent bid to boost its clout in the Asia-Pacific region.

Singapore and Malaysia have said that they welcome China's bid to join the CPTPP.

Days after China's application, Taiwan submitted its own.

Members of the CPTPP issued a ministerial statement after the meeting saying progress has been made in the areas such as e-commerce, and aimed to push for digital trade. Gan also said the members are keen on pursuing "green" and digital economy.

The pact, which entered into force in 2018, does not include the United States following its abrupt withdrawal from negotiations the previous year.