UK formally applies for TPP: Are Thailand, South Korea and China next? TOKYO/LONDON -- The U.K. formally asked Monday to join the Comprehensive and Progressive Agreement for Trans-Pacific Partnership in a push to expand and deepen the country's trade links with the Asia-Pacific region after leaving the European Union.

U.K. International Trade Secretary Liz Truss spoke with Yasutoshi Nishimura, Japan's minister for the pact and chair of the CPTPP Commission in 2021, and Damien O'Connor, New Zealand's minister for trade and export growth -- the country serving as the depository for official CPTPP documentation -- to get the ball rolling.

The 11 member nations of the CPTPP, or TPP-11, will prepare to expand its ranks, with the U.K.'s request to join potentially spurring other interested countries into action. The countries and regions that have expressed interest in joining include China, South Korea, Taiwan and Thailand.

In a letter to New Zealand's O'Connor, Truss wrote: "I am writing to you on behalf of the United Kingdom to formally request the commencement of negotiations on U.K. accession to CPTPP."

Calling it "one of the most important free trade areas in the world," Truss wrote that joining the pact is a priority for the U.K. "as a newly independent trading nation."

She later added that British membership "would also be the first step in expanding this influential and modern trade network of 11 dynamic economies beyond the Indo-Pacific region and Americas."

Japan, which serves as chair this year, seeks to maintain a high degree of free trade as part of the membership requirements. Adding the U.K., a staunch supporter of free trade, as the first member under expansion would provide crucial support in these efforts.

The TPP-11 trade agreement took effect in December 2018, with the extensive liberalization in tariffs, e-commerce and investment as the agreement's hallmark. Some 95% or more of tariffs are to ultimately be abolished in trade among members. For safeguards in the digital sphere, the TPP bars countries from requiring disclosure of software source code -- a provision absent from the Regional Comprehensive Economic Partnership, which counts China as a member.

Adding the U.K. would lift the TPP's share of global gross domestic product to 16% from 13%. According to U.K. government figures, trade with the 11 TPP nations totaled 111 billion pounds ($152 billion) in 2019. The first European participant would help spread the TPP as an international standard for free trade, possibly encouraging such interested parties as Thailand.

Yet the addition of new members requires unanimous consent. Once a formal application is submitted, the CPTPP Commission will set up a working committee to assess whether the candidate nation meets the requirements to join. The vetting process for the U.K. will take nearly a year, by one estimate. 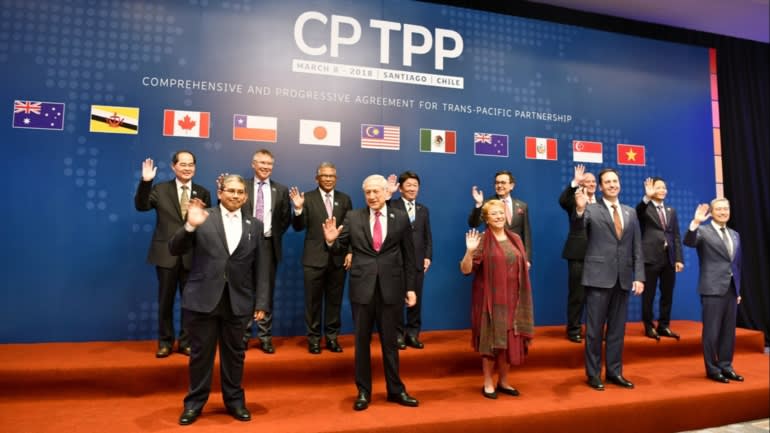 The CPTPP pact was signed in Santiago, Chile, in March 2018. (Photo by Naoyuki Toyama)

"Japan will start necessary discussions as Chair of this year's CPTPP Commission," TPP minister Nishimura tweeted Sunday. "We hope that the U.K. will demonstrate its strong determination to fully comply with high-standard obligations of the CPTPP."

"The rules will not be changed for one country," said Foreign Minister Toshimitsu Motegi, who handled TPP negotiations as Japan's top trade negotiator after then-President Donald Trump pulled the U.S. out the agreement the year before it took effect.

Motegi's comment underscores concerns about China. The TPP, which was signed in 2016 by the 12 nations of Australia, Brunei, Canada, Chile, Japan, Malaysia, Mexico, New Zealand, Peru, Singapore, Vietnam and the U.S., was to form a bulwark against Beijing, only for Trump to leave under his "America First" ideology.

The Biden administration, which has been cautious about rejoining, is expected to prioritize the pandemic response and other domestic issues.

Chinese President Xi Jinping said in mid-November that he would "favorably consider" joining the TPP, as if to exploit the American vacuum. By expressing interest ahead of Washington, Beijing seeks to be in a position to extract favorable terms.

The liberalized trade rules are seen as an obstacle for China. Although the TPP restricts preferential treatment of state-owned enterprises, gaining concessions on such fronts would be a boon.

Japan and the U.K. share the promotion of free trade as a common goal. In the event that some within the TPP press for relaxing the rules, the Japanese government sees its British counterpart as an ally in pushing back to maintain the stringent entry standards.