UK to apply for TPP membership Monday for 'bridge' to Asia

'We're at the front of the queue,' International Trade Secretary Liz Truss says 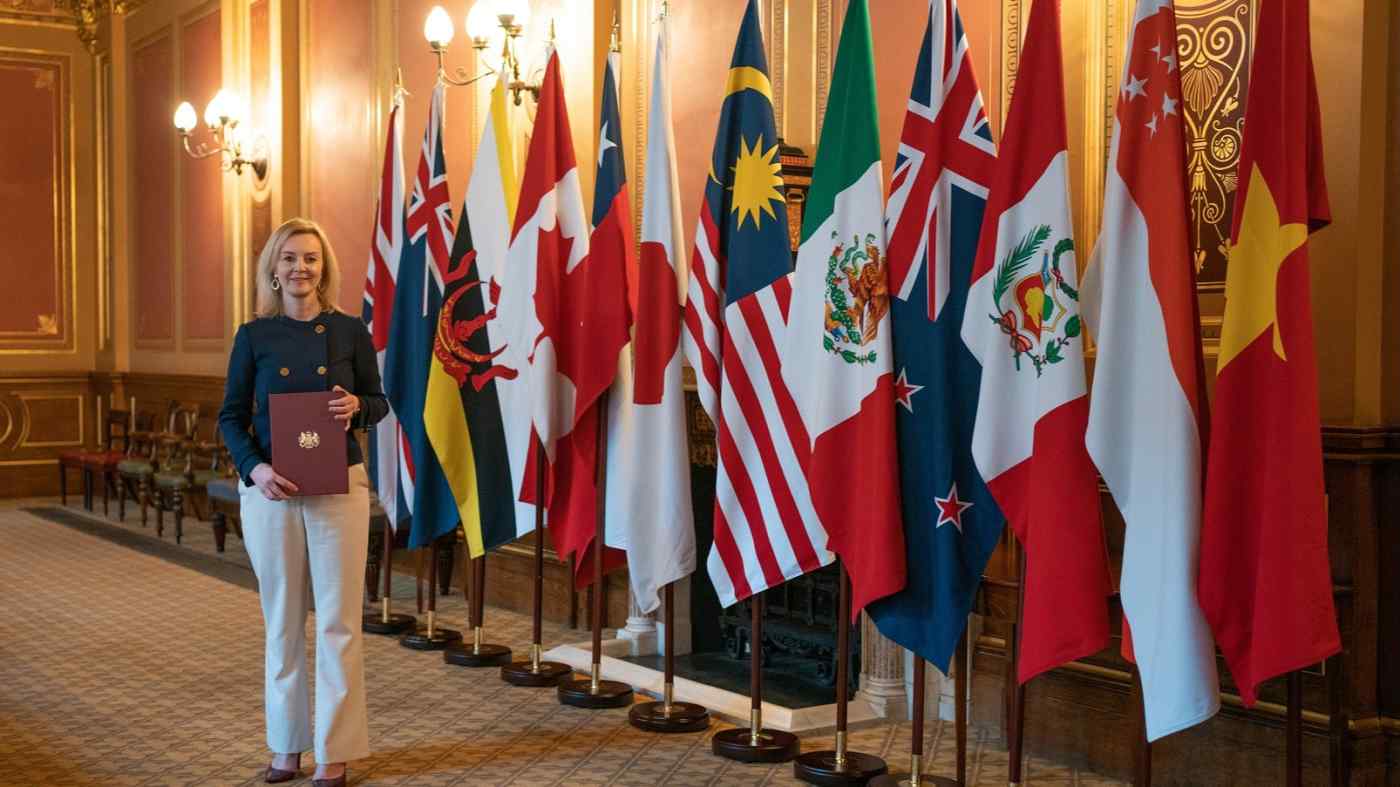 LONDON -- The U.K. will apply to join the Comprehensive and Progressive Trans-Pacific Partnership on Monday, in a major push to expand and deepen the country's trade links with the Asia-Pacific region after leaving the European Union.

"Joining CPTPP will create enormous opportunities for U.K. businesses that simply weren't there as part of the EU and deepen our ties with some of the fastest-growing markets in the world," U.K. International Trade Secretary Liz Truss said. "It will mean lower tariffs for car manufacturers and whisky producers, and better access for our brilliant services providers, delivering quality jobs and greater prosperity for people here at home," she said.

"We're at the front of the queue and look forward to starting formal negotiations in the coming months," she added.

If admitted, the U.K. will become the first country to join the partnership, also known as the TPP-11, since former President Donald Trump took the U.S. out of the pact in 2017. That has left 11 members in the grouping -- Australia, Brunei, Canada, Chile, Japan, Malaysia, Mexico, New Zealand, Peru, Singapore and Vietnam.

British Prime Minister Boris Johnson said, "Applying to be the first new country to join the CPTPP demonstrates our ambition to do business on the best terms with our friends and partners all over the world and be an enthusiastic champion of global free trade."

In an announcement Saturday, the Department for International Trade said that on Monday morning, Truss will speak to Yasutoshi Nishimura, Japan's minister for TPP-11 and chair of the 2021 TPP-11 commission, and Damien O'Connor, minister for trade and economic growth in New Zealand, the depository for official documentation for TPP-11 members, to formally request to join the partnership.

It will then be up to the commission to decide whether to begin the accession process. If it does, a working group will be formed to negotiate, and the U.K. will need to make a market access offer to start negotiations.

With the addition of the U.K., TPP-11 members will account for more than 16% of global gross domestic product, London says.

The existing 11 members are expected to welcome the U.K.'s entry, but negotiations on the terms are "not expected to conclude in just several months," a trade official told Nikkei Asia.

China, South Korea and Thailand have also expressed interest in joining the partnership. If those countries are admitted and the U.S. returns, the trade pact will take on a truly global aspect. But the administration of President Joe Biden looks to put trade on the back burner, focusing first on domestic issues. 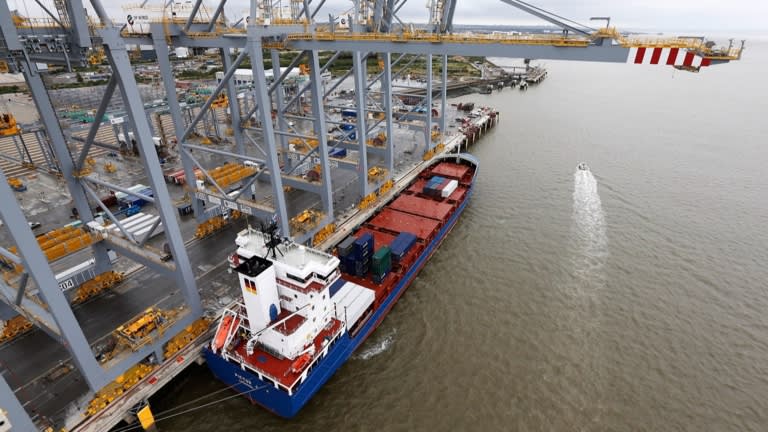 A container ship is moored next to a crane on the quayside at DP World London Gateway container port in Essex, southern England.   © Reuters

The U.K. had been engaging with the 11 member countries since July 2018, holding discussions with all the chief negotiators last September.

Frameworks such as TPP-11 and the Association of Southeast Asian Nations are seen as pillars for engagement, as well as bilateral relationships with like-minded partners in the region, such as Japan, Singapore, Australia, New Zealand and Canada.

Hosuk Lee-Makiyama, a senior fellow at the London School of Economics and Political Science, said joining the partnership will offer the U.K. its own "bridge" to the Asia market and a way to be present in the important region.

"For the moment, in the post-COVID environment, there are only two regions that have positive growth. It's China and Southeast Asia," he said.

"Even before the pandemic, there are not that many pockets of growth for a developed economy like the U.K. and from that reason alone it makes quite a lot of sense," to join, he said. "The world's first-order problems are in East Asia, as well as first-order opportunities are all in East Asia at the moment and you cannot hide behind neither Europe or United States in order to be an actor at that stage."

From a technical standpoint, Lee-Makiyama said a regional agreement like the TPP-11 will help the U.K. save costs compared with dealing with multiple bilateral agreements.

Sir David Warren, former British ambassador to Japan and associate fellow of Chatham House, said that while trade with the CPTPP members pales in scale compared to the U.K.'s dealings with the EU, the political implications are significant.

"There would be political benefits for the government in demonstrating that the U.K. was part of the continuing process towards multilateral as well as bilateral global trade liberalization," he said.

Michael Gasiorek, director of the U.K. Trade Policy Observatory and professor of economics at the University of Sussex, said the sectors most likely to be impacted by the TPP-11 are machinery and mechanical appliances, which account for 27% of U.K. export to TPP-11 members, as well as vehicles and pharmaceuticals.

Precious stones and jewelry make up 43% of the U.K.'s import from the members, he said, followed by electrical machinery and equipment and vehicles.

"Vehicles are therefore important for the U.K. but may be tricky because the CPTPP relies on U.S. standards and certification procedures which are different to those in the EU. Hence reconciling different regulatory regimes may not be easy," Gasiorek told Nikkei.

Since the U.K. voted to leave the European Union in a national referendum in 2016, the government set a clear aim to expand trade links in the Asia-Pacific, a growth region of the global economy.

With a stated ambition to have 80% of U.K. trade covered by free trade agreements by 2022, the U.K. is keen to establish itself as a champion for free trade and the international rules-based order, and to increase engagement beyond Europe in its vision as a "Global Britain."

Altogether, the U.K. has agreed or is currently in negotiations for a bilateral free trade agreement with nine TPP-11 members, though the majority of those concluded to a large extent replicate EU trade agreements that the U.K. was previously part of as an EU member.

According to the U.K. Department for International Trade, trade with TPP-11 countries has grown 8% a year since 2016, and was worth 111 billion pounds ($152 billion) in 2020. British companies had nearly 98 billion pounds worth of investments in those countries in 2018.