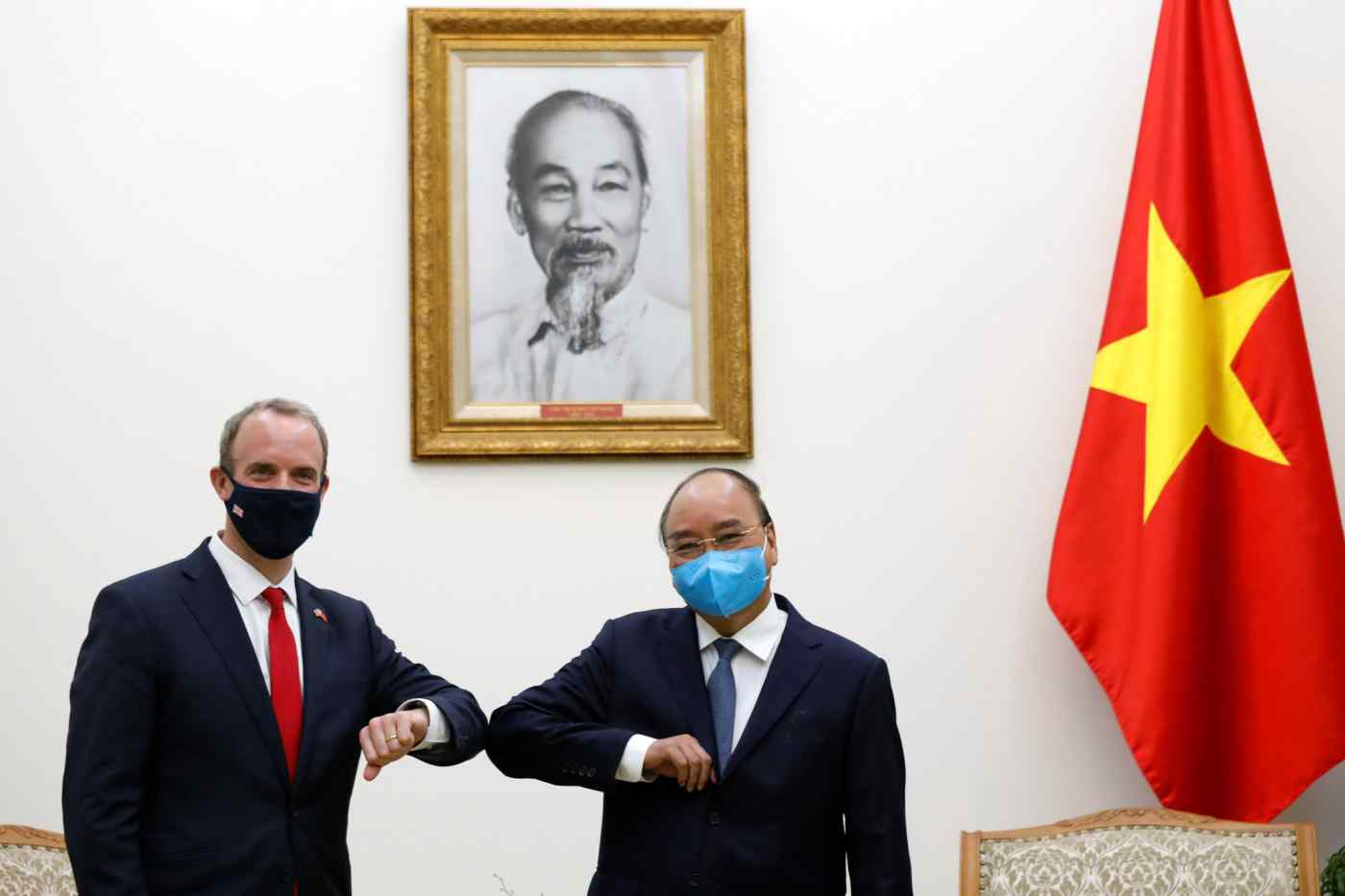 HANOI/HO CHI MINH CITY -- The United Kingdom said it has Vietnam's support to join a trans-Pacific trade deal, a boost for the country facing the dire economic impacts of Brexit and the coronavirus pandemic.

With an elbow bump rather than a traditional handshake, U.K. Foreign Secretary Dominic Raab met his Vietnamese counterpart, Pham Binh Minh, in Hanoi on Wednesday to discuss a virus vaccine as well as two trade deals.

One of those deals would be a bilateral agreement and the other spans 11 countries across the Asia-Pacific region, including Japan, Australia, Singapore, Mexico, and Canada. The U.S. withdrew from the Trans-Pacific Partnership in 2017 soon after Donald Trump was inaugurated as president.

"We have secured Vietnam's public support for the U.K. joining the Comprehensive and Progressive Trans-Pacific Partnership," Raab wrote on Twitter. "This is a significant step in taking the U.K.-Vietnam economic relationship to the next level, and demonstrating the U.K.'s commitment and value to the region."

Both sides are looking for closer trade ties. Vietnam hopes the trade link will help in its recovery from the pandemic, while the U.K. is trying to secure trade deals ahead of the ending of a transition period in December of its divorce from the European Union, its closest trading partner.

A trade deal between Vietnam and the EU took effect in August, but Brexit means that London will be left out of that agreement. The U.K. now hopes to "copy and paste" the EU deal for its own bilateral agreement with Hanoi as early as 2021, according to a source familiar with the matter.

In the meantime, Vietnam will apply the EU deal to the U.K. until a bilateral pact is ready.

"We look forward to further strengthening our trade and investment relationship and will work closely together to finalize and bring into force a bilateral free trade agreement (FTA) between the U.K. and Vietnam, to provide continuity for businesses in both countries when the Vietnam-EU FTA ceases to apply to the U.K.," the governments said in a joint declaration Wednesday on their strategic partnership.

Vietnam is keen to proceed with the U.K. trade deal as COVID-19 weighs on the export-driven Southeast Asian economy. Prime Minister Nguyen Xuan Phuc on Wednesday expressed his intention to speed up the process to finalize the FTA, national broadcaster VTV reported.

In September, Vietnam halved this year's economic growth target to a range of 2% to 2.5%. In May, Hanoi vowed to deliver economic growth of over 5%, but that was before a second wave of infections hit in July.

Besides Singapore, Vietnam is the only member of the Association of Southeast Asian Nations that has struck a trade pact with the EU.

Joining the TPP would give the U.K. greater access to markets across Asia as its ties to the rest of Europe weaken.

Vietnam's main exports to the U.K. include mobile phones, seafood, garments and textiles, while the U.K. is scouting out Vietnam's markets for such goods and services as education, renewable energy, technology, infrastructure, and health care.

The British delegation used its two-day trip to Hanoi to promote closer ties with Southeast Asia. During the visit, Raab said the U.K. will provide 6.3 million pounds ($8.1 million) of new funding to tackle the health and economic impacts of COVID-19 and to support the recovery from the pandemic across Southeast Asia.

The Vietnamese and U.K. officials held a workshop on advancing the development of a coronavirus vaccine. AstraZeneca and the Oxford University Clinical Research Unit are conducting virus research in Vietnam, according to the U.K. embassy.

"We will expand collaboration on research and innovation, including clinical trials, vaccine development and measures to ensure the medical supply chain's sustainability to cope with [the] pandemic emergency, [and] support global efforts to develop and deploy safe and equitable health care for everyone who needs it," the two countries' joint statement said.

Vietnam has said it could buy tens of millions of COVID-19 vaccine doses from Russia, though it is also working on its own vaccine trials.

Raab said his country is committed to working with the region on issues like maritime security -- a likely reference to the disputed South China Sea. He also held a conference call with ASEAN foreign ministers while in Hanoi, according to VTV.