DANANG, Vietnam - The two-day gathering of the leaders of the Asia-Pacific Economic Cooperation closed on Saturday afternoon with a declaration of collective support for free trade and inclusive economic growth. 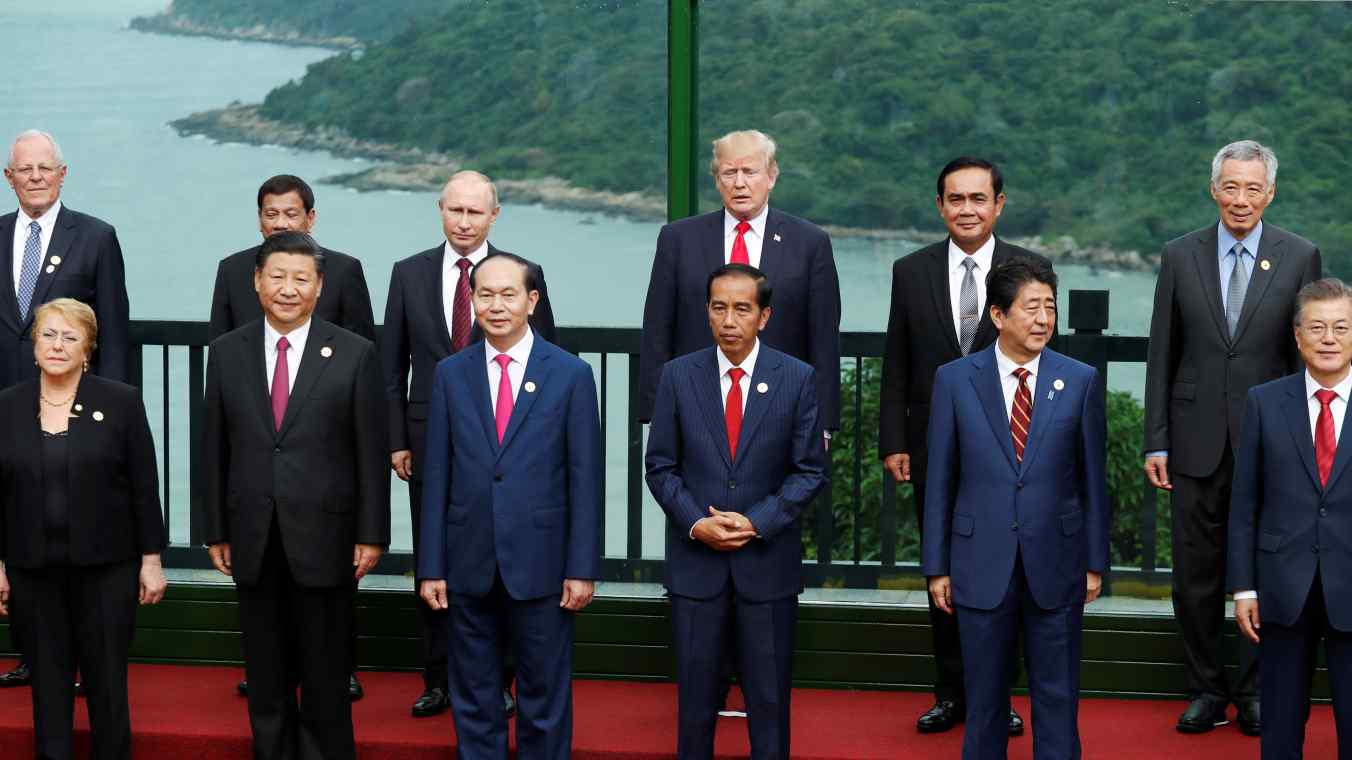 The heads of the 21 member states issued Saturday the "Danang Declaration," which reflected Trump's demand to address "unfair trade practices," such as subsidies, and called for "full implementation" of the rules set by the World Trade Organization, which Trump said had never been achieved.

But the statement basically articulated strong collective support for a "multilateral trade system," which showed a preference among other member states for broader trade agreements such as the Trans-Pacific Partnership and the Chinese-led Regional Comprehensive Economic Partnership.

"The Japanese government believes that the final statement's strong language promoting the multilateral trade system was a very significant achievement," an official at the Japanese Ministry of Foreign Affairs.

The series of meetings and conferences over the past week in the popular Vietnamese resort city highlighted the willingness of many Asia-Pacific to advance multilateral efforts without the U.S. Ministers from the so-called TPP 11 discuss the trade deal in the Vietnamese city of Danang on Nov. 9, 2017.   © Reuters

The trade ministers of the 11 remaining TPP member states agreed late Friday night to proceed with the pact without the U.S. and agreed on TPP's "core elements." TPP had been supported by the administration of former U.S. President Barack Obama, but Trump withdrew the U.S. from the pact immediately after his inauguration in January. The trade ministers said they would try to sign by the first half of 2018 the agreement, which has been renamed the Comprehensive and Progressive Agreement for the TPP.

Trump set the tone for the APEC meeting's focus on trade and other economic issues by declaring that "economic security is national security" in his address before business leaders prior to APEC summit events. "There was no discussion, either at the ministerial or summit meetings, on either North Korea or South China Sea," said an official of the Japanese Ministry of Foreign Affairs.

Outside the official APEC meetings, however, there were some discussions related to international security issues.

Trump's speech on Friday urged "every responsible nation to stand united" to counter North Korea's nuclear weapon development program and he condemned "territorial expansion," which apparently referred to China's construction of artificial islands in the South China Sea and the militarization of them.

In the bilateral meeting between Japanese Prime Minister Shinzo Abe and Chinese President Xi Jinping on Saturday, the leaders agreed to "deepen cooperation" to address North Korea, Abe told reporters after the meeting. They agreed to accelerate talks for an early implementation of a communication mechanism between their military forces. They also agreed to hold a three-party summit with South Korea regarding the North Korea issue "at the earliest possible date," Abe said.

Abe did not mention the South China Sea issue in the press briefing, implying there was no discussion about the issue. It was the sixth meeting between Abe and Xi since they both took power in 2012. The last meeting took place in July on the sidelines of the G-20 summit meeting in Germany.

Xi and South Korean president Moon Jae-in agreed in a bilateral meeting earlier on Saturday that Moon would visit Beijing in December for further discussions on how to resolve peacefully the North Korean nuclear weapon issue, according to a Korean presidential spokesperson. The bilateral relationship between China and South Korea deteriorated in the wake of Seoul agreeing with Washington to deploy the U.S. Terminal High Altitude Area Defense anti-missile system to counter North Korea threats. Beijing had strongly opposed the deployment as the system could easily target China.

Another noteworthy bilateral summit meeting was held between the U.S. and the Philippines. Philippine President Rodrigo Duterte is often called "Trump of Asia" because of his blunt language and strongman leadership style. It was the first meeting between the two men. "The leaders were generally pleased to finally meet each other," a Philippine presidential spokesperson told reporters. The meeting was short but "warm and cordial," the spokesperson said.

Both presidents then headed to Manila, where they will meet again at the summit meeting of Association of Southeast Asian Nations, with Duterte telling Trump, "See you tomorrow," according to the spokesperson.