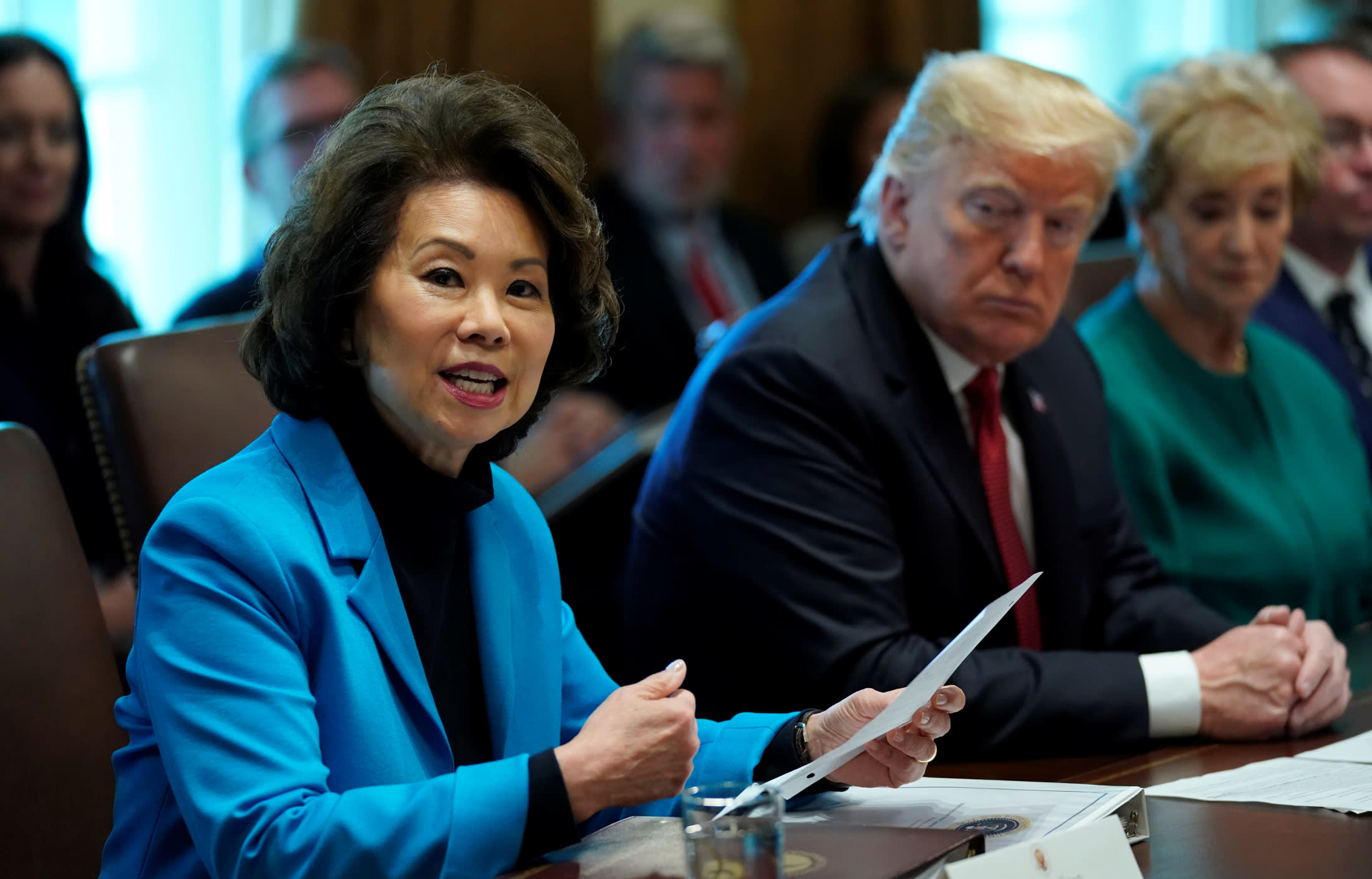 WASHINGTON -- The U.S. needs to relax its regulations to pave the way for development of self-driving vehicles, Transportation Secretary Elaine Chao told Nikkei in a written interview.

"Many of our vehicle safety regulations are outdated and actually prevent the introduction of new advanced safety technologies in new vehicles," Chao said.

She also described the U.S. as "home to the world's leading autonomous vehicle companies" and indicated that America has the upper hand in an intensifying competition for technology with China, Japan and Europe.

Chao, who has held the top post at the Department of Transportation since January 2017, gave the wide-ranging interview ahead of her visit to Japan Tuesday for Emperor Naruhito's enthronement ceremony, where she will head the U.S. delegation.

She is known as an influential figure with extensive personal connections throughout the U.S. political world. Her husband is Senate Majority Leader Mitch McConnell, the top Republican in the upper chamber.

Regarding the development of self-driving technology, the chief of the transport department said, "Part of the department's responsibility is to prepare for the transportation system of the future," making it clear that the department will proceed with relaxing regulations.

She noted that more than 80 companies have already embarked on testing of autonomous cars on public U.S. roads.

She also stressed that she has been calling on automakers and venture companies in Silicon Valley to demonstrate the attractiveness of autonomous cars and to stimulate consumer demand for such vehicles.

In Japan, a revised Road Traffic Law was enacted in May to make it possible for autonomous cars to run on public roads. In China, three companies, including major internet service provider Baidu, were granted self-driving commercial transportation licenses in September.

Chao, however, is not eager to put in place international standards for autonomous cars. "Setting specific regulations in this area would be premature and would have the effect of hampering the development of this promising innovation," she said.

Keeping in mind tough competition with other countries, the U.S. intends to set its own regulations aimed at encouraging technological development first.

Regarding new auto emission regulations, Chao made it clear that President Donald Trump's administration will make a final decision soon.

She expressed the Trump administration's intention to loosen regulations, saying the new standards "will not force automakers to spend billions of dollars developing cars that people do not want to drive."

"The new standards will help make new cars more affordable," Chao said. "They will strengthen our domestic manufacturing base by adding millions of new-car sales, and supporting good-paying American jobs."

The U.S. state of California has sued the federal government over emissions standards, seeking to set its own stricter standards. Chao expressed the Trump administration's readiness to wage a legal battle with the state.

The Trump administration "does have a responsibility to enforce the law, which only allows for one national fuel economy standard," she said.

Chao denied that there is a confrontation between the strongly liberal state and the Trump administration, which is advancing conservative policies. It is not a reason for the administration to reject the state's desire to set its own emissions standards, either, she said.

Trump won the 2016 U.S. presidential election on a pledge to make massive infrastructure investments. Commenting on a related bill pending in Congress, Chao said, "Everyone [every lawmaker] cares about the condition and safety of transportation in their community, state and country."

Keeping in mind the fact that Democrats in the House of Representatives are accelerating an impeachment inquiry into Trump, she said, "It would be a shame if politics in the House stopped the Congress from moving ahead."

She expressed concerns that efforts to draft an investment plan could be delayed if bipartisan momentum is further sapped by the impeachment inquiry.

The Trump administration and the Democratic Party agreed in April to consider an infrastructure investment bill worth $2 trillion.

But as the party later toughened its stance against the administration, drawing a sharp reaction from Trump, the bill has floundered.

Chao signaled a conciliatory approach to the Democrats, saying that the Trump administration will not rule out their proposed gasoline tax hike as a means of financing an investment plan.

"As the president has said, nothing is off the table, meaning all options will be considered," she said.

Chao will also face the challenge of coordinating views with the Republican Party, which is concerned about a deterioration of U.S. fiscal conditions due to massive investment.

Meanwhile, regarding Emperor Naruhito's enthronement, she said: "I am very honored to be selected by the president to represent the United States of America and lead the presidential delegation to the very auspicious and historic ceremony."

She also expressed her desire to interact with Empress Masako during her visit, saying, "I have also followed the empress's life, as I also graduated from Harvard University."

On the current Japan-U.S. relationship, Chao stressed that it "is very strong and has advanced" during the Trump administration, citing the recent signing of a bilateral trade pact.