Clad in traditional Japanese clothing, Saran Sawatphudsa and his two Thai friends stroll through rice paddies in Gokayama, in the central Japanese prefecture of Toyama.
Economy

Tucked in the 'Alps,' the future of tourism in Japan

Southeast Asian travelers are flocking to rural retreats like Gokayama

GOKAYAMA, Japan -- Saran Sawatphudsa and two female friends were walking up a dirt road on a hill rising out of the valley. The Thai tourists were staying in Gokayama, a picturesque hamlet tucked in the Japan Alps, and wanted a bird's-eye view of the scenery.

A rustic tableau of the famous thatched-roof farmhouses dotting the valley came into view, but Sawatphudsa's eyes were fixed on the snow atop the distant mountains. Thatched roofs are the defining trait of this farming community.

"Thailand also has hills and mountains, but this place has a bit of snow, too," he said. "Thailand doesn't have snow."

The trek back down to the village was a somewhat clumsy affair, as Sawatphudsa was clad in a yukata summer kimono, while his friends were wearing standard, heavier-gauge kimono -- hardly ideal clothing for a hike.

"It's very exciting," said one of Sawatphudsa's companions, referring to her kimono, "but not very comfortable."

But for her, a little discomfort was a small price to pay for looking special. "It's very kawaii," she said, using the Japanese word for cute. "I can wear this kimono to take photos in the village and look like a local."

Off the beaten path

A UNESCO World Heritage site, Gokayama -- in the central prefecture of Toyama -- is witnessing the effects of Japan's tourism boom, which saw the number of foreign visitors triple between 2012 and 2016. Increasingly, these travelers are venturing beyond the big cities to get a taste of the "real" Japan.

According to the Japan Tourism Agency, more than half of foreign tourists sought out locations outside the urban hubs -- such as Tokyo, Osaka and Kyoto -- in 2014 to explore more of the country. While that influx is bringing some money to this picturesque hamlet, the area's meager tourism infrastructure for foreign visitors translates to only a modest income. There are no large hotels, for example, and what few tourist-related offerings can be found are geared toward Japanese travelers.

There are some local inns, but most have elderly owners with little entrepreneurial zeal. The bulk of the younger residents, who could put their energy into finding ways to commercialize the steady stream of foreign visitors, move to the city.

Head for the hills

A large chunk of the people traveling to Gokayama are Southeast Asians looking to experience Japanese culture.

In late May, she and four travel companions rented a Nissan Serena van at Narita Airport, near Tokyo. They hopped on an expressway, bypassed the crowded capital and headed straight to a lake near Mt. Fuji and the snowcapped Japan Alps.

"Driving is very easy and so comfortable in Japan," said Meewasana, who was staying at a hotel in Gokayama.

"I always advise my friends to rent a car and drive if they come in a group of more than four," she said. "It allows you to go anywhere you want." 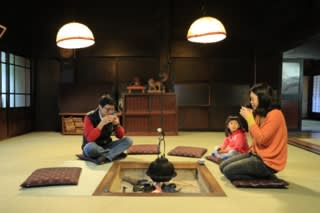 Ming-Jyh Sun, from Taiwan, and his family drink tea by a traditional sunken hearth in a farmhouse.

Yuh-Ru Chang, a 43-year-old Taiwanese tourist, was also drawn by the mountains. She came to Gokayama by car with her husband, Ming-Jyh Sun, and their 5-year-old daughter.

"I like the mountain views in Japan," Chang said. "Because we brought our child with us, we avoided the crowded cities. This region is better."

Other visitors are looking for the old Japan, untouched by the country's rapid modernization.

"We wanted to experience something local and traditional," said Sharifah Nurilyana Syad Fesal, a 34-year-old tourist from Malaysia. She and her husband, Rashid, drove here from Tokyo.

"In Tokyo and Kuala Lumpur, there are a lot of tall buildings," she said while exploring the attic of an old farmhouse with her husband. "This place is more traditional. It shows you what Japan was like." Malaysian tourists Sharifah Nurilyana Syad Fesal and her husband, Rashid, explore the attic of a farmhouse.

All these visitors could generate important revenue for this isolated community, filling up paid parking lots, purchasing souvenirs, dining out and splashing out for accommodations in large numbers.

But Gokayama residents tend to view themselves as the guardians of a noble heritage, not as businesspeople. Legend has it that the villagers are descendants of the Taira clan of warriors, who lost an epic battle to the rival Minamoto clan in the 12th century.

Ads for local businesses are kept to a minimum; bus drivers do not speak English. In local museums, audio and visual explanations about the village and local culture are provided only in Japanese.

Still, some efforts have been made to attract tourists. Farmhouses are dramatically lit up for several nights a month, their warm glow reflecting off rice paddies. A musical performance is held every other month, with local music groups belting out old folk songs accompanied by traditional drums and string instruments. Farmhouses are lit up at night for tourists.

Makoto Higashiyama, 35, uses his family's old farmhouse as an inn. He returned to the village about two years ago from Kanazawa -- the capital of neighboring Ishikawa Prefecture -- with his wife and three children to take care of his aging parents and look after his ancestral home.

The large home has four rooms for guests, who all dine together around a sunken hearth in the middle of the room. It lacks the modern amenities found in most modern hotels, but that is part of its charm.

Foreign guests provide the family with a steady income, even though the website is in Japanese only.

Overall, however, the village's finances are tight. And while Higashiyama said he does not want to see commercialism take over there, he thinks more can be done to tap this opportunity. "To be honest," he said, "we want travelers to come and stay."