TOKYO/MANILA -- Central banks in Asia are under pressure to conduct another round of interest rate increases, as the market turmoil in Turkey further undermines emerging market currencies. Rushed hikes, however, could stall economic growth.

Indonesia on Wednesday became the latest nation to tighten policy, increasing its benchmark rate to 5.50% from 5.25%.

Until last weekend, few expected the central bank to take further action. But Turkey's crisis spilled over in the form of emerging market sell-offs, prompting the hike.

The Indonesian currency has fallen as much as 7% against the U.S. dollar this year. Investors have deemed the country's fundamentals to be weak -- especially its prolonged current-account deficit -- and offloaded the rupiah. Bank Indonesia has raised its key rate by a combined 125 basis points since the middle of May.

As it aims to reduce the deficit, the Indonesian government also is looking at unconventional measures, like boosting consumption of locally produced biodiesel fuels to push out imports. But it may take time for such steps to support the currency. Many Asian currencies have fallen against the dollar since the beginning of 2018, prompting the region's central banks to tighten their policies. An ongoing series of rate hikes by the U.S. Federal Reserve has contributed to the pressure.

The Fed kept its key short-term rate at 1.75% to 2% at its policy meeting on Aug. 1 but sounded upbeat about the prospects for the world's largest economy. The bank said economic activity was growing at "a strong rate," signaling two more rate increases to come by the end of the year.

A stronger dollar, coupled with Turkey's financial crisis, could negate Asian central banks' efforts to prop up their currencies.

India, too, is already feeling the pain. The rupee -- the worst-performing Asian currency in July -- has hit all-time lows against the dollar this week. A drop on Monday reportedly spurred an intervention by the Reserve Bank of India.

Although Yes Bank senior economist Vivek Kumar expects no significant economic impact from the falling currency, one concern is that rising inflation could exacerbate the situation.

In August, the RBI raised its key rate at a second consecutive meeting, bumping it up by 25 basis points to 6.5% to curb inflation. Some economists expect the RBI will increase the rate again at its next meeting on Oct. 6.

The Philippine central bank on Aug. 9 raised its policy rate, carrying out a 50-basis-point hike to 4.0%. It was the Bangko Sentral ng Pilipinas' steepest increase in a decade.

The Philippines, like India, is attempting to control rising prices that have been squeezing households. The highest inflation in at least five years, partly attributable to the weakening peso, is hitting the poor particularly hard.

"The prices of goods have worsened. You have to be smart in budgeting," said Gina Quetua, 40, who lives in Manila. 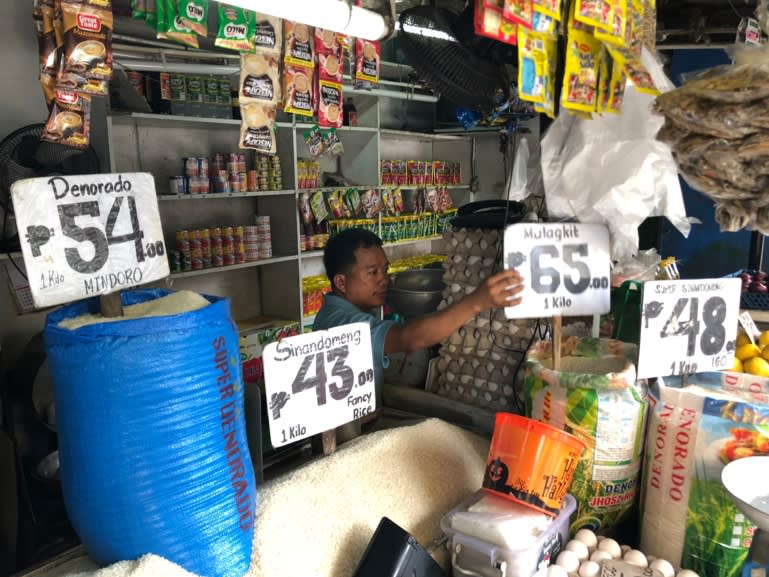 Inflation in the Philippines reached 5.7% in July and has squeezed household budgets. (Photo by Mikhail Flores)

Since the beginning of the year the peso has fallen against the dollar by more than 7%. The exchange rate at one point touched 53.7 pesos to the greenback, the lowest in over 12 years.

The central bank's increase may give citizens like Quetua some breathing room. Gov. Nestor Espenilla said the aggressive move was intended to tame supply-side inflationary pressures. "The Monetary Board deemed stronger monetary action to be necessary to rein in inflation expectations," he said. The Bank of Thailand is also feeling the heat. It lowered its policy rate to 1.5% in April 2015 and has kept it there since. Only one of its seven board members voted for a rate rise when they met on Aug. 8. However, the baht has fallen about 8% against the dollar in four months.

Annual inflation in Thailand, at 1.5% in July, is not yet as severe as in the Philippines, but that does not rule out the possibility of a rate increase. "Should economic expansion continue and inflation move more firmly within target, the need for a policy rate increase in order to build policy space in the future would be increasing," read minutes taken at a central bank meeting.

Tim Leelahaphan, an economist with Standard Chartered Bank in Thailand, expects a 25-basis-point rise in September, and possibly another in the fourth quarter. "There is a clear shift in the central bank's stance toward tightening," he said. Accelerating capital outflows from Thai assets, partly due to the baht's depreciation, may also force the bank's hand.

However, cumulative tightening can lead to the last thing any central bank wants -- slower economic growth.

"Asian central banks must be careful about how much they tighten, as the world economy faces many impactful uncertainties, such as growing trade tensions," said Toru Nishihama, economist at the Dai-ichi Life Research Institute.

Shotaro Tani in Jakarta, Yukako Ono in Bangkok and Rosemary Marandi in Mumbai contributed to this report.