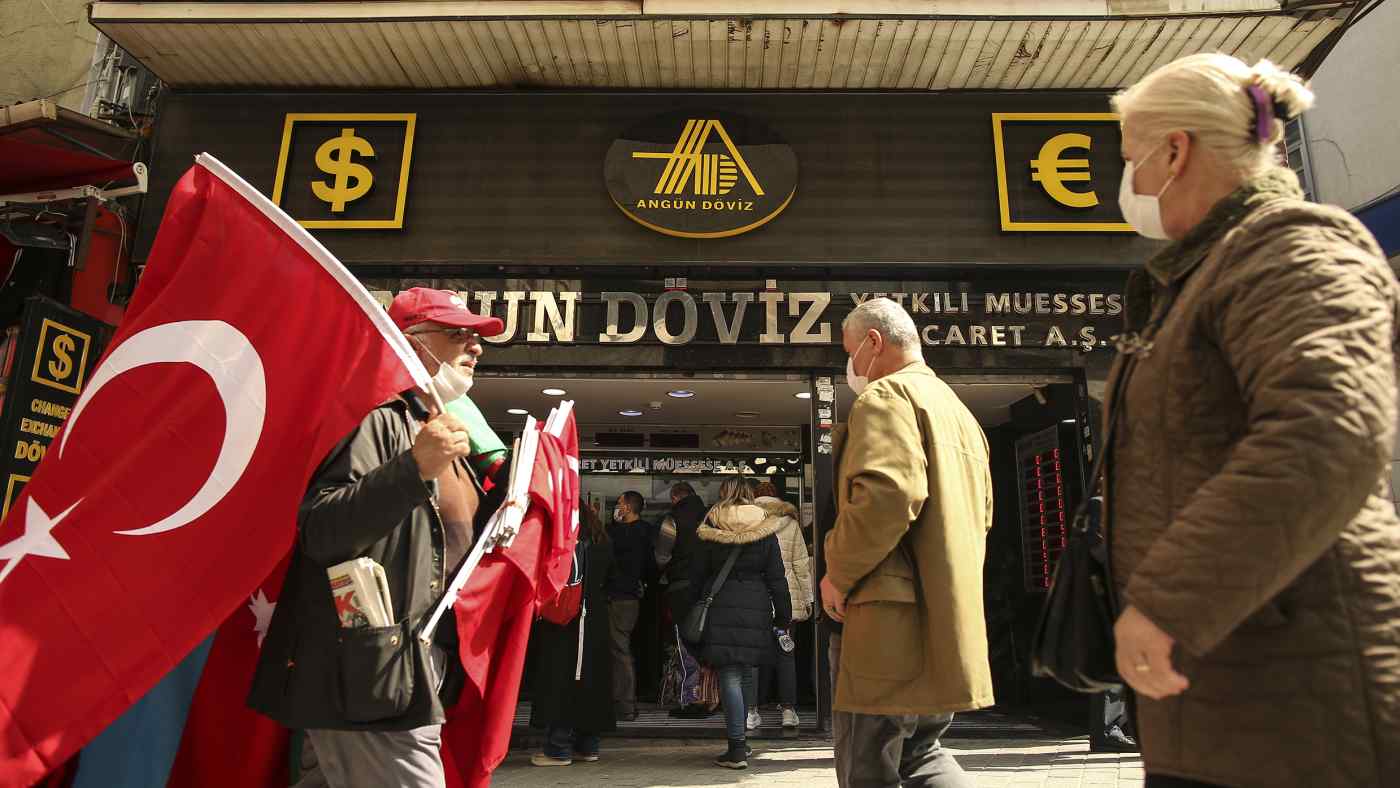 ISTANBUL -- Financial markets in Turkey and beyond have been whipsawed by President Recep Tayyip Erdogan's firing of three central bank governors and four statistical institute chiefs since 2019.

The revolving door has led investors to doubt the commitment of economic leaders to fight soaring inflation -- an issue that has dogged the nation's economy for decades -- and the public to question the reliability of the country's economic data.

Complaining about the breakneck speed of top management changes in key institutions in recent years, Simone Kaslowski, president of Tusiad, Turkey's largest business group, said in late March that for development, "institutional stability is as important as political stability."

The uncertainty also stems from the rapid swings in the central bank's benchmark policy rate as a result of switches between loose monetary policy to stimulate growth and tightening to defend the lira. The Central Bank of the Republic of Turkey bumped the one-week repo rate from 17.75% to 24% in September 2018, before clipping it down in steps to 8.25% in May last year. Since then the rate has been cranked up rapidly, reaching 19% in March.

Inflation climbed above 16% in March for the first time since 2019, putting pressure on the CBRT's new chief to keep policy tight after his unexpected appointment last month sparked a sell-off of the Turkish lira. Volatile currency moves and rising inflation have become the norm as Erdogan has repeatedly swung the ax.

Erdogan, who has described high interest rates as "the mother and father of all evil," in July 2019 fired then-governor Murat Cetinkaya, who had overseen the increase in the benchmark to 24% the previous September.

Cetinkaya was replaced by Murat Uysal, who aggressively cut policy rates during his 16-month tenure, while trying and failing to defend the lira by burning more than $100 billion of central bank reserves, according to Goldman Sachs calculations.

The unorthodox policy mix of Uysal and the administration spooked foreign and local investors alike, prompting them to leave lira assets in droves. The Turkish currency slumped to a record low of 8.58 against the greenback in November last year. 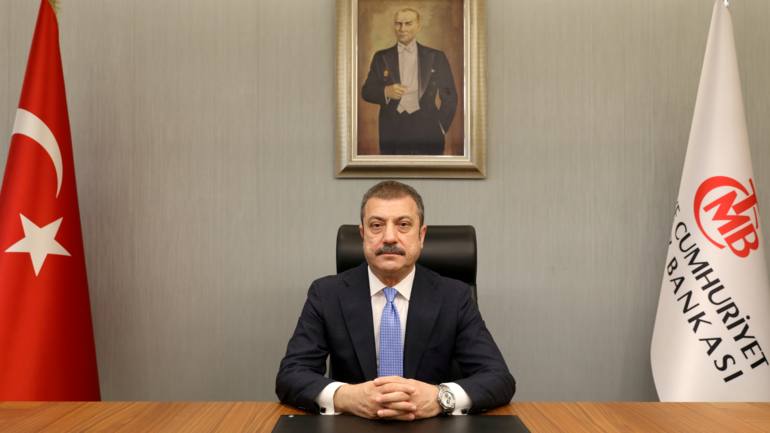 Agbal reversed to orthodox policies and ended indirect foreign exchange selling by the central bank. His hawkish line helped rebuild some of the battered credibility and trust by markets, with more than $20 billion flowing into Turkish assets from overseas via stocks, bonds and currency swaps under his watch.

Agbal raised rates by 875 basis points in just 4.5 months, with his final act being a 200-point hike in March -- double that of market expectations. This appeared to be the final straw for Erdogan, who had previously endorsed Agbal publicly, saying that a "bitter pill" was necessary.

Citing multiple sources, Reuters reported that Erdogan's sacking of Agbal was also due to the former governor's ongoing review on how a total of $128 billion dollars had been burned during a futile attempt to defend the lira by former central bank chiefs since 2019. Opposition parties had been attacking the Erdogan administration on this point. Kavcioglu wrote in a February column that "raising interest rates will not solve economic problems."

"On the contrary, it will deepen problems in the period to come," because "interest rate hikes cause an increase in inflation indirectly."

This unorthodox view, which is shared by Erdogan but generally not accepted by mainstream economic theory, shocked markets. Kavcioglu also defended indirect forex selling by the central bank to prop up the lira in another column in early March.

Investors feared a return of unorthodox policies and premature policy rate cuts by the new dovish central bank chief, and rushed to exit. Some fixed income investors incurred heavy losses. The lira quickly lost most of its gains during Agbal's four-month tenure.

"We will never turn bullish on Turkish lira as long as Erdogan is effectively running the central bank," Andreas Steno Larsen, global chief forex and fixed income strategist at Nordea, tweeted right after the sacking of Agbal. Turkish President Recep Tayyip Erdogan gives a statement after a meeting in Ankara on April 5.   © Reuters

Some 59% of respondents to a Metropoll survey in March said their confidence in the economic administration had fallen due to the abrupt dismissal of Agbal -- a sentiment shared by almost 40% who said they supported Erdogan's ruling party.

In the same poll, only 5.5% of respondents said they thought that food inflation was lower than 20%, as opposed to official data putting it at 17.4% in March. Close to 47% saw food inflation at 40% or higher.

The statistical institute's efforts to increase transparency by inviting prestigious economists, think tanks and academics to advisory boards lasted only two months before they were disbanded in March.

To stop the bleeding in markets, Kavcioglu has been toning up forward guidance in an attempt to assure investors there will not be a change in central bank policies. In a recent call with investors, he distanced himself from his controversial columns, asking them to pay attention to his new institutional stance, not past remarks, one meeting participant told Nikkei.

"The new governor probably came in with a political mandate to slash policy rates," former central banker economist Ugur Gurses said, adding that they were forced to hold rates for now because of the strong market reaction that triggered a 10% depreciation in the lira, a 4-percentage-point spike in 10-year government bond yields, and a rapid rise in the cost of insuring Turkey's sovereign debt. Erdogan repeated his desire for low rates this month, saying, "We are determined to decrease inflation and interest rates to single digits."

"In the case of a deterioration in the global risk sentiment and further depreciation in lira by around 5%, inflation may peak at 18% to 19% by June, where the current 19% policy rate level may not suffice in providing sufficient positive real return in the coming months. Given that rate hikes are off the table, if inflation further exceeds 19%, the lira will come under renewed pressure."

Adding to Turkey's woes, the country is now seeing record high daily COVID-19 cases -- the seven-day moving average is around 60,000, one of the highest tallies in the world. The nation is now under partial lockdown, while only around 9% of the population have received two vaccine doses because the main supplier, China's Sinovac Biotech, is significantly behind the delivery schedule.

Gloomy coronavirus numbers are dashing Turkey's hopes to generate $20 billion this year from tourism -- a much-needed source of revenue that could prop up depleted central bank foreign exchange reserves.

Early Wednesday, Erdogan made a small cabinet reshuffle. There has been speculation that his son-in-law Albayrak might return to the cabinet, but that has not yet materialized. It is not certain whether the president will continue to shake-up cabinet.

Wolfango Piccoli, co-president of political risk consultancy Teneo Intelligence, told Nikkei, "As President Erdogan is under intense pressure from the opposition to explain what happened to $128 billion of Turkey's foreign reserves, the chances of Albayrak's comeback are low."

Defending the reserve sales, Erdogan said on Wednesday: "We carried out a battle against the triangle of evil of interest rates-exchange rates-inflation in the economy," adding "reserves may be used again when needed."

Piccoli said some recent appointments, notably the new governor of the central bank and new trade minister, suggest that Albayrak's network across institutions "is still widespread and powerful."

"But we shall also remember that the ultimate say on pretty much everything stays with only one person, President Erdogan."