ISTANBUL   Politically, Turkish President Recep Tayyip Erdogan is on a roll. Yet, he is presiding over an economy that is struggling to regain traction, and his recent trip to Beijing for the Belt and Road Forum did little to change that.

Erdogan has sought to position his country as the linchpin of China's Belt and Road Initiative -- a plan to build infrastructure stretching from Asia to Europe. "Turkey is located at the crossroads of Asia and Europe, and is one of the leading countries on the Silk Road, with its unique geographical location," he stressed at Beijing's conference on the initiative in mid-May. Despite that advantageous location, though, Erdogan was unable to attract investment in a hotly anticipated infrastructure project. 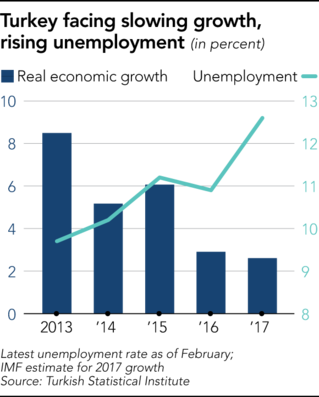 Chinese businesses have already pushed into Turkey, targeting finance, ports and other sectors. There was speculation that, on the sidelines of the Belt and Road Forum, Chinese President Xi Jinping and Erdogan would discuss moving forward with a high-speed railway that would run east to west across Turkey.

As it turned out, the summit between the leaders produced little more than an extradition treaty.

"In order to promote even greater development of relations, China and Turkey must respect and give consideration to each other's core concerns, and deepen security and counterterrorism cooperation," Xi told Erdogan, according to China's Foreign Ministry.

Surely Erdogan would have liked to bring back an economic trophy to go along with the political gains he has scored this year. In a national referendum in April, Turkish voters narrowly approved his push to amend the constitution and enhance the authority of the president. A rule on presidential neutrality was scrapped in the process, allowing him to reclaim the chairmanship of the ruling Justice and Development Party, known as the AKP, in late May after an interval of about three years.

Now, Erdogan is poised to run the country until 2029. Whipping the economy into shape, however, is proving more difficult than amassing power.

Real economic growth came to 2.9% in 2016, according to the Turkish Statistical Institute -- less than half the 6% rate logged in 2015. A Reuters poll of 50 economists in April put the average forecast for this year at 2.6%, far below the government's target of 4.4%.

In February, Turkey's unemployment rate hit a seven-year high of 12.6%. The rate among young workers was even higher.

With a population of about 80 million that is growing relatively fast, real economic expansion of around 3% will not create the jobs Turkey needs. Inflation is only deepening public discontent: The consumer price index climbed 12% on the year in April.

Both the public and private sectors are still waiting for productivity improvements from delayed structural reforms, including deregulation. On top of that, a slowdown in investment from abroad has hit the economy hard.

SPOOKED   Turkey suffers a chronic current-account deficit. Its economy hinges on investment and lending from overseas -- not just for infrastructure construction, but to fuel the spending of credit card-dependent consumers.

The direct investment tally in the first quarter of 2017 was little changed from a year earlier, offering no sign of a recovery.

The decline in foreign investment is not only troubling in the context of the current-account deficit. Over the medium to long term, slower factory construction and technology transfers are bound to take a toll on Turkey's competitiveness.

The country may need a whole new economic blueprint. In 2010, Turkey's gross domestic product per capita came to $10,500, triple the $3,500 recorded in 2002. The figure has since plateaued. Many economists argue that unless the country rethinks its consumption-driven development, amid migration from rural to urban areas, it is unlikely to achieve brisk growth in the years to come.

But the biggest factor making businesses -- domestic and foreign alike -- reluctant to invest is the ongoing state of emergency imposed after the failed coup last July. The Erdogan government continues to crack down on dissent in the name of fighting terrorism, with the cabinet issuing decrees that have the teeth of laws. The number of suspended or dismissed civil servants and military personnel has reached 150,000.

"I haven't been able to find a new job and my passport got suspended," said one man who lost his job as a central government worker. "I cannot have a hope for my future."

The legal foundation that underpins corporate activity is also crumbling, as more than 4,000 judges and prosecutors have been removed from their posts. Arbitrary investigations and court rulings are the order of the day. As of the end of March, the government had seized 879 companies with total assets of 40 billion Turkish lira ($11.1 billion), according to a state fund.

Amid the turmoil, 51% of referendum voters still chose to give the president more power. But a closer look at the results tells a different story: In big cities like Istanbul and Ankara, which are traditionally AKP strongholds, opponents of the constitutional changes outnumbered supporters. This was also the case with young people, who feel the strain of unemployment the most.

The deteriorating environment has prompted some Turkish companies to seek greener pastures in Asia. Arcelik, a large consumer electronics maker, in 2016 began producing refrigerators in Thailand and acquired a Pakistani peer. In late May, it also announced a joint venture with Voltas, an air conditioner manufacturer affiliated with Indian conglomerate Tata Group, to make refrigerators and other appliances.

Vestel, another big Turkish consumer electronics company and a well-known player in Europe, has come forward to buy the TV business of troubled Japanese conglomerate Toshiba.

AWKWARD RELATIONS   While juggling the economic challenges, Erdogan also faces the tricky task of rebuilding ties with the U.S. and Europe.

Turkey still aspires to join the European Union, but the bloc is increasingly concerned about human rights and the rule of law in the country. "We discussed the need to cooperate," Donald Tusk, the president of the European Council, said of his talks with Erdogan during the NATO summit in Brussels in late May. "I put the question of human rights in the center of our discussion."

Erdogan's relationship with U.S. President Donald Trump is complicated for different reasons. When the leaders met in Washington in mid-May, Erdogan asked for a halt to American support for Kurdish forces fighting the Islamic State group in northern Syria. He also asked for the extradition of Turkish cleric Fethullah Gulen, a political foe who is residing in the U.S. It appears Trump did not budge on these and other matters.

Some experts argue that the concentration of power in Erdogan's hands will help to stabilize Turkey, and eventually lead to economic reforms. But others warn that one-man rule will not produce the deregulation Turkey needs to make the next leap from middle-income to advanced economy status.