Two years on, Myanmar's lack of reform turns investors away

With 'everyone afraid of the lady,' liberalization all but grinds to a halt YANGON -- Two years after Aung San Suu Kyi took office as Myanmar's de facto leader, the enthusiasm that greeted the country's transition to democratic rule and prospects for the economy seems to have all but faded.

Bureaucratic hurdles have hindered foreign entry to the once-promising market and persecution of the Rohingya ethnic group has drawn widespread international condemnation.

Under the circumstances, the country appears likely to revert to the ties with China it relied on during its years of international isolation.

"The comprehensive insurance liberalization plan has been approved, and it will be announced soon," announced the managing director of state-owned insurer Myanma Insurance, Sandar Oo, at a seminar in Yangon in early March.

But an official of a major Japanese insurance company expressed disappointment. "Soon" is a word that has been used repeatedly since last July.

The government has drawn up a basic framework that would allow wholly foreign-owned companies to enter the country's life insurance market, while nonlife insurance businesses would need to tie up with a local partner. But a final decision has yet to be made and the 18 foreign insurers with offices in Myanmar, including Japan's Dai-ichi Life Holdings and the U.K.'s Prudential, are growing impatient.

Myanmar spent years cut off from the rest of the world while economic sanctions were in place against the military government. When retired general Thein Sein took power and the country transferred to civilian rule in 2011, the prospect of the 50-million-strong market opening up was met with considerable excitement.

That increased when Suu Kyi's National League for Democracy came to power on March 30, 2016, having won a landslide victory in elections four months earlier. The Nobel laureate unofficially leads the government from the position of state counselor.

Two years on, however, much work remains to be done on the economic front. The approved volume of foreign direct investment between April 2017 and February 2018 stood at $5.3 billion, according to the Myanmar Investment Commission. But the figure for the 12 months through March 2018 is projected to be smaller than the previous year's $6.6 billion, a second consecutive year of decline.

With foreign companies losing interest, office rent in Yangon is falling. According to real estate information company Colliers International, the average monthly rent per square meter of floor space was $44 in 2017, a drop of 31% since 2013.

Colliers official Tony Picon put this in part down to a cooling off following initial overheating, but also pointed to difficulties faced by many companies.

"At the moment, in the office market particularly, a lot of sectors are held back. They are not liberalizing," said Picon, citing the banking and insurance industries as "two of the big user of office space." 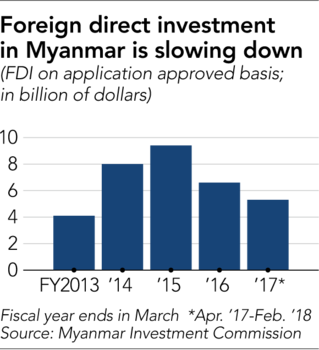 The Thein Sein government succeeded in attracting a certain amount of foreign investment. It started joint development of the Thilawa Special Economic Zone with Japanese public and private sector bodies, and laid the groundwork for a new investment law.

The current government has proposed a general 12-point economic reform plan, but few details have been established and little progress has been made on its implementation.

Few people, if any, appear capable of coordinating the interests of the various government departments with those of the private sector.

"Now everybody's afraid of the lady," said former Union Minister of the President's Office Soe Thein, who was tasked with doing so under the previous government. "The previous government was able to start with relatively easy reforms such as opening up the mobile phone market and lifting the import ban on used cars," said professor Toshihiro Kudo of the National Graduate Institute for Policy Studies in Tokyo.

But the focus of economic reform has now shifted to the finance and retail sectors, where resistance is much stronger.

The International Monetary Fund projected in 2015 that Myanmar's economy would achieve an 8.3% real-term growth in 2017. The current estimate is 7.2%.

"A second wave of reforms is needed to accelerate the growth momentum," said the IMF.

The Rohingya crisis has alienated Suu Kyi's government. To date, about 700,000 members of the Muslim minority have fled the western state of Rakhine to neighboring Bangladesh.

The United Nations and much of the international community have denounced what has been referred to as ethnic cleansing. 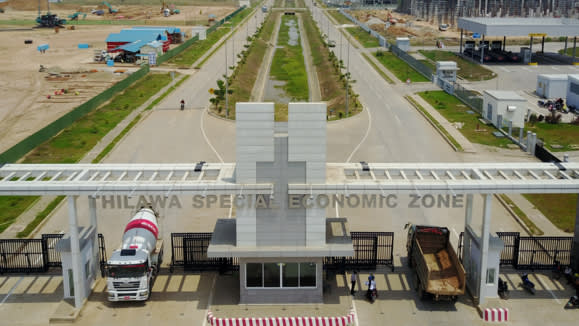 The Thilawa Special Economic Zone south of Yangon was developed in partnership with Japanese public and private sector bodies. (Photo by Ken Kobayashi)

"European businesses are extremely sensitive to human rights violations," said Filip Lauwerysen, executive director of the European Chamber of Commerce in Myanmar, adding that the Rakhine issue had a "definitely negative affect on FDI."

Concerns over potential consumer boycotts are likely to hold back investment from U.S. and European companies.

"If Myanmar wants to attract European investment," he explained, "it has to understand business structures and political sensitivities that rise up in their decision making before the board approves to move the budget from another ASEAN country to Myanmar."

Suu Kyi has shown little sign of trying to hold the military collectively accountable for the situation. In January, the armed forces acknowledged that 10 Rohingya had been killed by government troops.

"A country needs to take responsibility for the rule of law in the country, and this is the first step on the road. It is a positive thing," she said. Rohingya Muslims gather outside makeshift homes near the Kutapalong refugee camp in Bangladesh in February. Many Western companies have held back from investing in Myanmar over human rights concerns.   © Reuters

One reason Suu Kyi has been reluctant to address the issue is the public backlash she would face. Buddhists make up 90% of Myanmar's population and many refuse to acknowledge the Rohingya as citizens of the country.

Another is that the military continues to wield significant influence. The constitution stipulates that the armed forces have authority in matters of national security and 25% of parliamentary seats are allocated to military officers, enough to block any attempt at amendment.

Moreover, Suu Kyi came to power by accepting the constitution, meaning confrontation with the military is not an option for her.

With Western countries becoming disenchanted, China has been quick to move in. Beijing has defended its southern neighbor at U.N. meetings on the Rohingya crisis and sees the country as a key link in its Belt and Road Initiative.

It has supported the development of the Kyauk Phyu Special Economic Zone in central Rakhine and Chinese businesses' entry into Myanmar.

Suu Kyi has visited China three times since the NLD came to power. On March 22, T Khun Myat a close aide to the influential pro-China politician Shwe Mann, was inaugurated as speaker of the lower house of parliament.

Keeping the military happy and forging closer ties with China will contribute to stability in the short term, but could also lead to further international isolation.