OSAKA (Kyodo) -- The sole bridge connecting Kansai airport in western Japan to the main island of Honshu completely reopened on Monday, in time for the upcoming 10-day Golden Week holiday, having been damaged during a devastating typhoon last September. 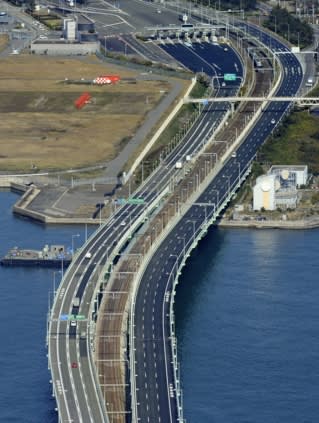 Typhoon Jebi had flooded a terminal and a runway at the region's major international gateway, and caused a tanker to smash into the bridge, causing extensive damage and stranding thousands of people at the airport.

Only four lanes out of six had been reopened. Now, with the other lanes also in use, "all airport functions including airport access will be fully restored," said Kansai Airports, which operates the facility.

The full reopening had been expected to take more than a year but was cut to seven months as work was completed ahead of schedule, in time for the start of the hectic vacation period, starting in late April.