TOKYO -- Prime Minister Shinzo Abe's economic policies, dubbed "Abenomics," have lifted business and consumer sentiment in Japan. But the country is running up a trade deficit as its exports fail to grow as vigorously as had been expected, even with the weakened yen.

What is the outlook for Japan's current-account balance, a key measure of the country's ability to earn money, in the coming years? In an interview with The Nikkei, Japan Country Head of
UBS Zenji Nakamura discussed this and other issues from the viewpoint of a global financial institution. 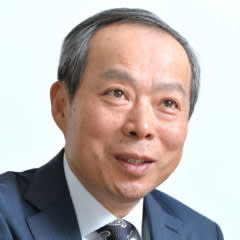 Q: What are the key implications of Japan's shrinking current-account surplus?

A: As a factor behind growth in Japanese imports, increased consumer spending is as important as surging energy imports. Given the aging of the nation's population, consumer spending will inevitably keep growing through the first half of the 2020s. It is obvious that consumers in their 40s and 50s, who have financial assets, spend more than young people, such as teens and those in their 20s.

Abenomics started under these circumstances. Aggressive monetary easing and fiscal expansion have created a downtrend for the yen and have pushed up Japanese stocks. The wealth effects of higher stock prices have led to faster expansion of consumer spending than expected, thereby fueling growth in imports.

Q: Why are Japanese exports struggling to go up?

A: When I talk with top corporate executives about exchange rates lately, a surprisingly large number of them express a neutral stance, saying they don't want either a strong yen or a weak yen. Their companies have shifted much of their production overseas. The amounts of products they manufacture abroad and sell in the Japanese or overseas markets are increasing. The reality of the Japanese economy today is that a weaker yen doesn't directly boost the bottom lines of Japanese manufacturers.

Demand in the U.S. is recovering steadily. But Japan's strained diplomatic relations with China and South Korea are hurting Japanese exports. The number of overseas markets where Japanese companies can profit is decreasing. The Abe government's proactive pacifism is the right strategy from the long-term perspective, but it causes short-term economic problems for Japan.

Q: Do you see any signs of declining competitiveness of Japanese companies?

A: The auto industry is in fine shape. The electronics industry, another pillar of industry for Japan, is facing a rough going as Japanese brands and products lose their competitive power in the global market. The Japanese electronics industry could go into a gradual decline if the current situation continues. We need to nurture next-generation industries that can make profits.

Some domestic markets, including the steel market, are tightening. But Japanese manufacturers are showing no signs of expanding their capital spending in Japan. They are seeking to build up global production systems. There is no hope for investment-driven economic growth in Japan.

Q: What are the medium- and long-term prospects for the Japanese economy?

A: The increased surplus in the income balance is offsetting the trade deficit for now. But Japanese overseas investments are not very profitable -- there are no significant sources of foreign exchange. It is possible that Japan's current-account balance will fall into the red someday. This is a major cause for concern for Japan, which has little chance of eliminating its fiscal deficit anytime soon.

Steps must be taken before this risk becomes reality. The government needs to develop a viable energy policy and take effective measures to change the nation's industrial structure. Structural growth in consumer spending will only continue until the mid-2020s. There is not much time left.

Q: What are the vital components of an effective growth strategy for Japan?

A: It is the service sector that is growing. Productivity is improving sharply in the information and telecommunications industries and also in the distribution sector. These industries are spending a lot on facilities and equipment at home. The government's strategy for economic growth tends to be focused on shoring up the manufacturing sector. But policymakers should pay more attention to the service sector, which accounts for two-thirds of the economy.

As for trade and overseas investment, the proposed Trans-Pacific Partnership trade pact could contribute greatly to Japan's economic growth by making it easier for Japanese companies to expand their spheres of operation. Japanese companies are facing the challenge of improving further their highly productive manufacturing systems and building up wide-area platforms that can generate profits.