UK turns to Asia for nurses to cover staff shortages Nurses take their oaths in Manila. The high caliber of the nurses and training programs in the Philippines and the experience of recruiting in the country has made it one of the nursing strongholds in Asia.   © Reuters
RHYANNON BARTLETT-IMADEGAWA, Nikkei staff writerMay 5, 2019 14:00 JST | Europe
CopyCopied

LONDON -- Zaira Paz, a nurse from the Philippines, arrived in the U.K. more than a year ago to work and help support her family back home.

She had first applied to work in Singapore, but later set her sights on Britain when it opened up to applicants, as examination costs would be covered by the hospital there. Paz also felt an English-language environment was important to be able to communicate with patients.

"How can you offer the care that you want if you've got this language barrier," the 30-year-old said. The hospital where she works now welcomes three to four new nurses every month from her home country.

A combination of factors including uncertainty over Brexit affecting European nurses, demographic changes and a shortage in domestically trained staff have made nurses from outside of Europe an important part of the workforce in the U.K., which is estimated to have over 30,000 vacancies for registered nurses in England alone. The Philippines and India now account for the largest number of foreign nurses working in England.

"If we were not being able to be supported by the nurses from India and the Philippines, if we were just focusing within the U.K. or currently within Europe to recruit the numbers of nurses that are needed, we would struggle," said Andrew Carter, associate chief nurse of the Oxford University Hospitals NHS Foundation Trust. Filipino workers, including nurses applying to work in the U.K., attend a lecture at a review center for the International English Language Testing System in Manila in April.   © Reuters

Representatives of the trust -- based in Oxfordshire, England -- have traveled to India three times and the Philippines once since late 2017, when they began an international recruitment campaign focusing outside of the European Union, and have offered jobs to 300 nurses in those countries to work in its four hospitals.

OUH Chief Nurse Sam Foster said that the new recruits are particularly important in areas where the U.K. has not invested enough in training domestically, such as nurses working in operating rooms.

While the trust has not stopped hiring from the U.K. or the EU, the numbers are just not enough, according to Carter. It has a vacancy of nearly 14% for registered nurses, and the new recruits are expected to be key to improving that figure.

Although it is costly to recruit from India and the Philippines, the high caliber of the nurses and training programs in those countries and experience of recruiting there previously has made the two nursing strongholds in Asia obvious choices, according to Carter and Foster.

The U.K. is facing a serious health staff shortage, which is estimated to balloon to a shortfall of 70,000 nurses in the National Health Service -- the publicly funded health care system -- in five years' time in England alone if current trends continue, according to a recent joint report by the Health Foundation, the King's Fund and the Nuffield Trust. The report said the NHS will need to recruit an average of 5,000 foreign nurses a year, alongside other policy responses, just to reach a 5% vacancy rate by 2023-24.

The U.K. historically has relied on international recruitment to plug gaps in the health care sector, but a strict immigration policy and Brexit are constraining that long-standing practice, said Professor James Buchan, senior visiting fellow at the Health Foundation in London. 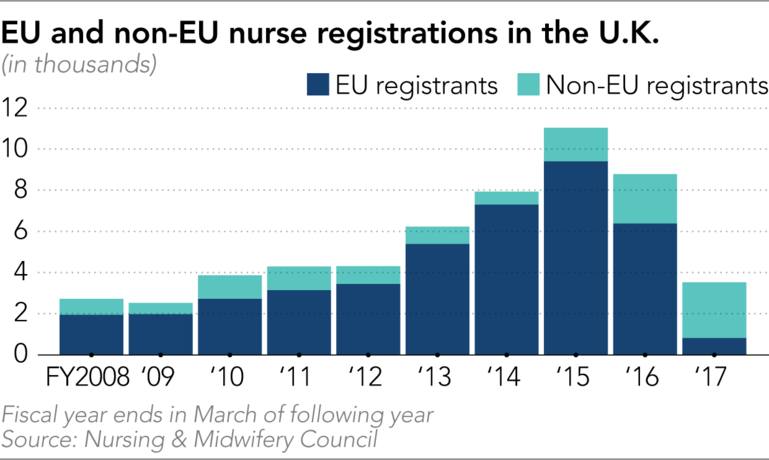 From roughly 2012 to 2016, the U.K. recruited large numbers of nurses from other countries in the EU, particularly Spain, Portugal and Italy, which was easier because of the qualification recognition within the union and prompted by the economic downturn in southern Europe.

With a chaotic Brexit dragging out for nearly three years creating uncertainty over their status and improving economic conditions in southern Europe, nurses from the EU are choosing to leave the U.K. or not apply to relocate there, Buchan said. People in the health industry also say tough new English-language tests have contributed to the fall in European nurses. India and the Philippines both have high levels of English-language proficiency.

Since 2016, when the British voted to leave the EU, there has been a steep decline in new entrants from the European Economic Area, or EEA, to the British Nursing and Midwifery Council register, which new nurses must join to practice in the U.K.

Because the U.K. has agreements with the Philippines and India over the ethical recruitment of nurses, hospitals in Britain are now finding that they are trying to recruit from the same talent pool. Ethical recruitment measures came in response to the increasing number of global migration of health workers, with the World Health Organization introducing a code of practice for international recruitment to protect developing countries with critical shortages of health staff and to ensure migrant health workers' rights. 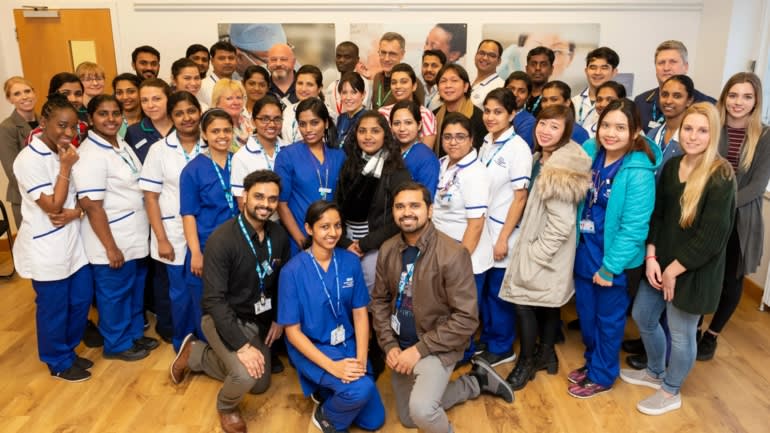 "There was more than one U.K. trust out in India when we were there in March," Carter said. "So it is about how we have to market ourselves on what we can do well."

With the WHO estimating that there could be a shortage of 50,000 midwives, 1.1 million nurses and 750,000 physicians among 31 selected OECD countries by 2030, developed economies across the globe are also looking abroad to recruit health workers.

"Particularly around nursing, you can see most high-income countries are working through what they've got to do to maintain or increase their nursing workforce," Buchan said. "For most of them there is the demographic driver, which is an aging population."

For Paz, the Filipina nurse, she is thinking of renewing her three-year contract and staying as long as possible. "It was quite an adjustment, but just thinking of the things that I will gain through it, now I can send money back home, I can travel," she said. "Most of all, I think I've made my mum proud."