Asian economies will be impacted by the U.S.-China trade war since many of them supply China and are heavily involved in the automotive trade.   © Reuters
ERWIDA MAULIA, Nikkei staff writerOctober 12, 2018 17:26 JST | Southeast Asia
CopyCopied

NUSA DUA, Indonesia -- If it further escalates, the U.S.-China trade war could reduce Asia's gross domestic product by 0.9% over the next two years, the International Monetary Fund said on Friday.

Asia is projected to fare better than other regions this year as trade tensions rise, the U.S. tightens its monetary policy and oil prices surge.

In its Asia-Pacific outlook, the IMF forecasts the region's economy to grow 5.6% in 2018. This is unchanged from the fund's April outlook.

In its world economic outlook released on Tuesday, the IMF lowered its global growth forecast for this year by 0.2%, to 3.7%.

But as U.S.-China trade tensions take more of a toll, Asia, which accounts for more than 60% of global economic growth, will begin to suffer like the rest of the world. Because of this, the IMF cut its 2019 growth forecast for Asia by 0.2% from its April outlook, to 5.4%.

The latest forecasts take into account tariffs that the U.S. and China have already slapped on each other's exports. 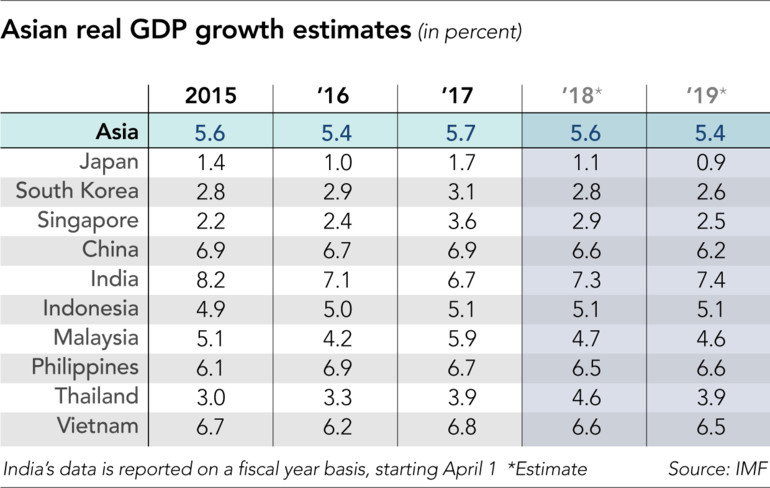 But they do not take into account the impact of further tariffs that the U.S. has proposed nor of China's announced retaliatory steps.

"Considering all of these current and proposed tariffs, as well as their knock-on effects on investor confidence and financial markets, the peak impact on China's output could be 1.6% over the first two years, and for the U.S., GDP could drop by around 0.9%," said Changyong Ree, the IMF's Asia-Pacific director. "The Asia region as a whole would also see a peak GDP loss of up to 0.9%."

Ree was speaking at a news conference on the sidelines of the annual IMF-World Bank Group meetings on the Indonesian resort island of Bali.

The IMF said other Asian economies will be caught up in the U.S.-China skirmish since many send supplies to China and are heavily involved in the automotive trade. It added that although aggregate short-term job losses would likely be limited, sectors targeted by specific tariffs could see "sizable impacts."

As repercussions from the U.S.-China trade war spread and external demand declines, Asian policymakers could react by liberalizing their own trade and investment regimes, the IMF said, adding that these steps could lead to tighter economic integration and foster a new driver of regional growth.