China and the U.S. will continue to lead the world in GDP, but mounting protectionist sentiment is threatening to split the world into rival economic blocs.   © Reuters
SUMIO SARUYAMA and KENGO TAHARA, JCER Long-Term Economic Forecast TeamAugust 1, 2019 14:20 JST | China
CopyCopied

The U.S. -- leader of the digital economy -- is sharpening its "America First" stance and taking a more adversarial stand against China, with the two likely remaining engaged in a fierce economic rivalry through 2060, according to a report by the Japan Center for Economic Research.

The center has envisioned an economic landscape through 2060 to predict paths that major economies will take, and what Japan must do to remain economically vibrant.

Japan is forecast to struggle with stalled productivity in addition to a shrinking and aging population, seeing real gross domestic product continuing to contract in dollar terms. The country is expected to lose its No. 3 position economically and trail the U.S., China, India and Germany.

JCER took into account three factors when making its long-term forecast. First, intangible assets will become more important than tangibles -- such as plants and equipment -- as the basis for wealth creation. Intangible assets are not physical but produce added value. These include software, intellectual property rights, and operational or organizational know-how.

Intangible assets are already attracting more investment than tangibles in the U.S. and some European countries. These assets are vital for controlling online finance, autonomous driving and other services because they, unlike conventional services that are offered on a face-to-face basis, expand on their own while becoming digitized. Second, data sharing mechanisms are needed for enhancing productivity. Unlike general goods, data is "non rival" in nature, as multiple people can use the same data simultaneously to generate multiple spillover effects. For example, if the movement of people can be plotted by examining electricity consumption data, shops and restaurants can streamline purchasing and staffing since they will be able to more accurately predict customer visits.

The third factor that JCER accounted for is the importance of maintaining an open global economy. Globalization results in specialization and improves productivity by fostering competition and information exchange. As cross-border services become increasingly available thanks to digitization, it will be imperative not to impede the free flow of data.

The economic forecast through 2060 took into account population trends as well as tangible and intangible investments and "economic openness," which in turn greatly affects productivity, uncovering two distinctive features of the world economy.

The first is the U.S.-China rivalry. China will maintain its high growth rate and continue to close the economic gap with advanced economies, overtaking the U.S. in the first half of the 2030s. After this, a shrinking population will hinder growth, making it difficult to employ new technologies to boost productivity, as the tech gap with other developed countries will have narrowed.

In addition, closed systems -- such as those characterized by preferential treatment given to domestic companies and restrictions on data outflow -- will hinder productivity. Consequently, the U.S. will catch up with China by 2060, intensifying competition between the two.

The second point the forecast revealed is that Japan's presence in the global economy will have diminished. In terms of GDP, Japan will be surpassed by India in the 2020s and Germany in the 2040s. While Japan's population continues to age and shrink, India's will grow until 2060. Germany will retain its high rate of productivity thanks to low trade and investment barriers within the European Union.

Japan's population will drop to about 100 million by 2060. While people aged 65 and over now account for a quarter of the population, this ratio will jump to almost 40% in the year, shrinking the country's workforce further.

In addition, Japan's intangible investment is biased toward software and research and development. Moreover, the accumulation of intangible assets -- such as businesses logging profits on specific operations -- is limited when compared with other countries.

Japan also has yet to make good use of its abundant health, medical and other related data. The U.S. has a system that allows individuals to obtain their health records and prescriptions from medical institutions and pharmacies, while this practice is still limited in Japan. 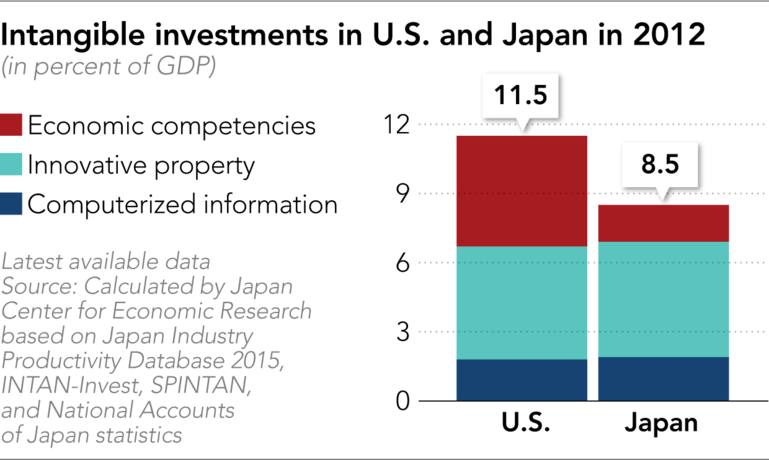 If it wants to avoid further stagnation, Japan should broaden its presence in the digital economy. If it raises intangible investment vis-a-vis GDP by 5 percentage points to a level higher than the U.S., it can boost economic growth by 0.3 point and maintain positive growth. Data sharing is key to realizing this.

If data is made more widely available without having it hoarded by a small group of companies, added value will increase along with competition. For example, if a bank can share transaction information with third parties, the country could see its fintech sector grow, with more payment and asset management apps being developed.

The free flow of data is also important for international business. E-commerce and global payments involve the exchange of data. Hence, the global value chain for sharing manufacturing processes and operations across borders can be considered an intangible asset. Data is indispensable for the creation and maintenance of the chain.

Localization, on the other hand, restricts data outflows, increasing the cost of doing cross-border business and disrupting overall trade.

If the trade war intensifies and divides the global economy into blocs as was the case before World War II, a "great stagnation" would like ensue.

According to the protectionist scenario that envisions the U.S. and U.K. restricting immigration and the free flow of data, economies around the world -- including the U.S. and China -- will contract. This would hit Japan especially hard, given that the country's population woes. Japan could see a steep decline in both overall GDP and per capita GDP because of heavy reliance on overseas demand.

To avoid this scenario, policies to maintain openness and rectify wealth and income imbalances are essential. If digitization increases worldwide, companies that know how to fully leverage data and other intangible assets will see their bottom lines rise, while workers' wages will likely sink as labor's share of income decreases.

Measures to update "digital capitalism," such as recompensing individuals for their role in producing data, are needed to lessen income inequality and prevent divisions in society.