China, Hong Kong follow suit; Philippines, Malaysia may be next Just hours after the Fed rate increase, the People's Bank of China undertook its third rate increase of 2017, lifting the interest rates on its seven-day and 28-day loans to commercial banks by 5 basis points to 2.50% and 2.80% respectively.

Asia is dependent on foreign capital for economic growth. Higher interest rates in the U.S. tend to make the U.S. more attractive as an investment destination, luring money away from Asia, potentially causing turmoil to the region's financial markets. The Hong Kong Monetary Authority also raised its policy rate by 25 basis points to 1.75% on Thursday. It normally sticks close to the U.S. Fed because the Hong Kong dollar is pegged to the U.S. currency.

PBOC's previous rate increase, in March, also came immediately after a Fed rate hike and the move suggests China is seeking to cushion the impact of the U.S. monetary action and prevent capital outflows from the world's second largest economy.

"We think today's move shows the authorities' intention to curb capital outflows" amid concerns about the impact of U.S. tax cuts and the Fed rate hikes, economists at Standard Chartered said in a report. "We acknowledge the risk of faster hikes, should U.S. GDP growth accelerate or financial conditions ease further," they added. 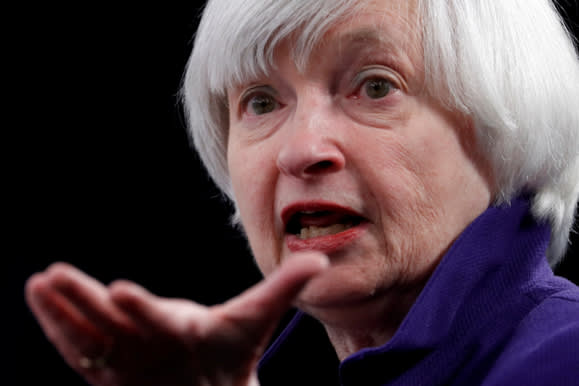 The U.S. Federal Reserve on Wednesday raised the target range for its fed funds rate by 25 basis points to 1.25%-1.5% and projected projected three more hikes in each of 2018 and 2019.

The U.S. move had been well signaled, and the Asian markets have taken it in their stride, sending the greenback down across the board in the Asian currency market.

But the dollar's weakness may not be so long-lasting. "We still maintain a rather hawkish aspect for the Fed in the coming year. We are looking for four rate hikes in 2018. I don't think this move of the US dollar is sustainable," RBC's Trinh said.

The U.S. economy continues to wield huge influence on the other side of the Pacific, even though the region's financial and economic dependence on the U.S has declined, and both China and Japan are paying less heed to Washington in their monetary policies.

The Fed, which started raising rates two years ago, announced in September it will normalize its balance sheet over the period of next three years, beginning in October, marking the end of its quantitative easing policy.

The Fed's power was amply demonstrated in the so-called 2013 taper tantrum, when fears of an early end to U.S easy money spooked financial markets, including in Asia. Indonesia was among the worst affected, forcing its central bank to lift interest rates to support its falling currency. Most economists, however, believe that Asia will handle any repercussions of the U.S. monetary tightening better this time round.

"Stable long-term funding costs are important for Asia, and local markets have thus proved resilient after the Fed's move," he said.

Stable long rates are also "limiting pressures on capital flows from Fed tightening, and given robust current account surpluses in most countries, little impact on exchange rates or local financial conditions should be expected," Neumann added.