BANGKOK -- Chinese netizens over the past year or two have been complaining about what they call lousy dining options for rail travelers, and a closer look at the offerings reveals a fundamental problem weighing on consumption in the country.

Images contrasting Japanese and Chinese bento boxes sold aboard trains abound online. Bento lunches offered to shinkansen bullet train passengers in Japan cost as much as 1,000 yen ($9.47). Meanwhile, packaged meals on Chinese high-speed rail sell for 40 yuan ($6) or so -- not at all affordable considering the local income level.

Furthermore, Japanese bentos tend to feature various side dishes, while their Chinese counterparts include just three or so items. Even considering the fact that the Japanese cuisine culture that packs numerous side dishes in a box is nonexistent in China, meals on the country's rails appear to lack value.

Cheaper options are available, but passengers complain that meals costing about 15 yuan are simply "awful." So what long-distance travelers do is bring or buy instant noodles -- sold for about 5 yuan.

Many discuss online why train food is unpalatable, and one reason they seem to agree on is the lack of competition. Trolley vendors on Japanese long-haul trains offer nearly a dozen bento options, including Japanese meals and Western food and sandwiches -- and new offerings may be added at each stop. At major hubs such as Tokyo Station, vendors market hundreds of different bentos and side dishes. It is only natural that intense competition produces delicious food with affordable prices.

In China, state-owned China Railway manages the railroads and apparently gives preferential treatment to affiliated vendors, due possibly to de facto regulations on market entry and protection of vested interests. If the Chinese rail food business is opened to a countless number of vendors as in Japan, travelers now eating 5-yuan instant noodles might happily pay 15 yuan for tastier meals.

Expectations have been high for consumption to drive China's growth, but consumer spending remains lackluster and growth is stuck in the upper 6% range. It is easy to see why cash-hoarding consumers do not spend much at home: They do not find products and services worthy of their money. Their online complaints about train food go to show there is strong consumer demand for inexpensive, quality meals -- and this demand remains unmet.

Chinese tourists in Japan are going on a shopping spree for the same reason. Heavy duties and indirect taxes make luxury goods from abroad too pricy in China, prompting consumers to purchase the same products while visiting Japan and other countries. Beijing may criticize such "explosive" shopping as helping another country's economic growth instead of the home market. However, if China wants its people to shop at home, it needs to lower duties and relax regulations to make foreign luxury goods less expensive. 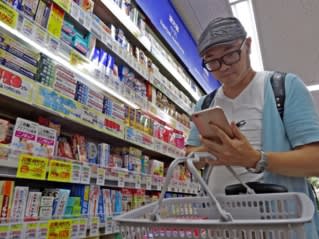 A Chinese tourist shops at a Matsumotokiyoshi drug store in Tokyo.

A growing trend among wealthy individuals is medical tourism. Shunning poor service at Chinese hospitals, the affluent are getting physical checkups in Japan and Southeast Asia while also going sightseeing. Some are even receiving surgery and other treatment abroad. Again, China is losing opportunities to meet the needs of patients precisely because of the low quality of its medical services. Deregulation to promote competition is crucial.

To sustain economic growth, a government needs to respond to the needs of people who are making more money than ever and develop industries meeting such needs. Still, even with this obvious logic for deregulation, Beijing has opted to protect vested interests. It has raised duties on upscale goods purchased abroad, increasing the rate on luxury watches from 30% to 60% and that on cosmetics from 50% to 60%. This may discourage international shopping sprees but will not stimulate domestic consumption.

Medical deregulation has been introduced, but only to a limited degree. There were only two foreign-owned independent hospitals in China as of February, according to Japanese consultancy Clara Online. A complicated web of vested interests is hampering structural reform in this and other industries such as finance.

Concerned about the ailing economy, Beijing this year hammered out steps to increase government spending. With such an antiquated idea, however, any progress in stimulating consumption will likely be limited -- and Japan and other destination countries will continue to enjoy the money Chinese travelers spend there.