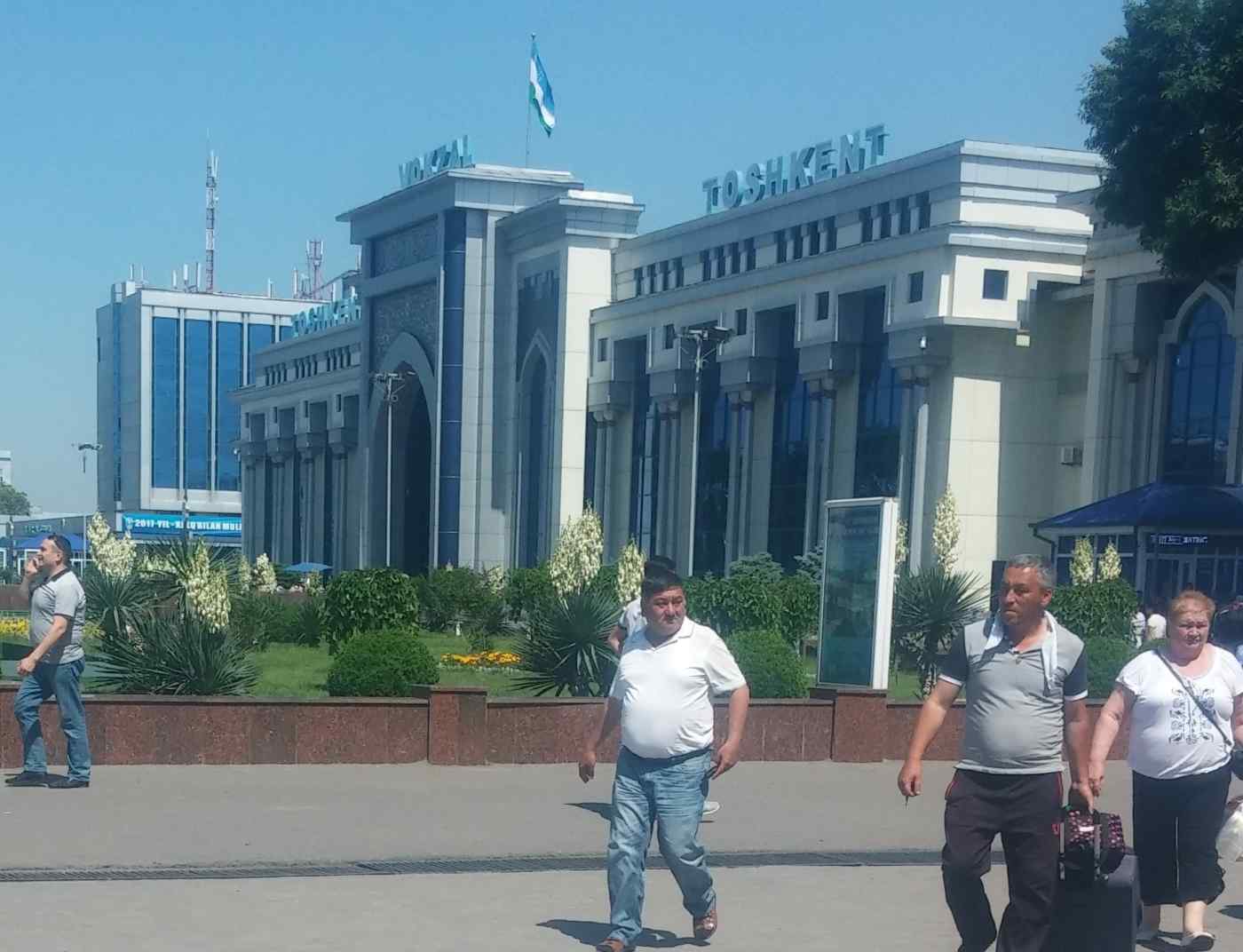 KELES STATION, Uzbekistan -- A train pulls slowly out of Tashkent's shiny railway station, only to grind to a halt half an hour later at Keles, on the Uzbek side of the border with Kazakhstan.

"It will now stand idle here for an hour or so until Uzbek customs and border officers complete checks of passengers' documents and belongings," sighs Marziya Beysenbayeva, a septuagenarian woman travelling home to Almaty. "At least we are sitting in our air-conditioned compartment, not standing under the scorching sun," she said, referring to long delays suffered by travelers at overcrowded land crossings between Uzbekistan and Kazakhstan.

The direct train service, operated twice a week between Tashkent, the Uzbek capital, and Almaty, Kazakhstan's commercial capital, was launched in March after Uzbekistan's President Shavkat Mirziyoyev abandoned the isolationist policies of his predecessor, the late Islam Karimov.

Since assuming the presidency in December 2016, Mirziyoyev has pursued an open-door policy towards the country's immediate neighbors in Central Asia, aiming to restore Uzbekistan's natural role as a transit hub on the Silk Road. Uzbekistan's transport openness also coincides with China's ambitious Belt and Road Initiative, intended to bring connectivity and cooperation to the countries lying between China and Europe.

Under Karimov, transport links with neighboring nations were curtailed, and crossings to and from Kyrgyzstan, Tajikistan and Turkmenistan were each restricted to two or three points. Each border is more than 1,000km long. Several rail services that crisscrossed what were previously constituent republics of the Soviet Union fell into disuse amid disagreements over transit fees and maintenance, forcing people and goods onto longer alternative routes.

Uzbekistan borders all four of the other former Soviet Central Asian countries, as well as Afghanistan. Mirziyoyev's shuttle diplomacy -- he has met his counterparts from Turkmenistan, Kazakhstan, Tajikistan, and Kyrgyzstan at least twice each since he became president -- has vastly improved bilateral relations and raised hopes for genuine cooperation and integration in the region.

Mirziyoyev has also brought a greater degree of domestic openness. On July 28, the Uzbek prosecutor-general's office disclosed that Karimov's eldest daughter Gulnara, who disappeared from view three years ago, was convicted and imprisoned in 2015 on over tax evasion and other charges. In April, Uzbekistan Airways established a direct service, albeit after repeated delays, between Tashkent and the Tajikistan capital Dushanbe -- the first such link in 25 years. Karimov's government halted air links after a civil war broke out in Tajikistan between Islamists and secularists in 1992. However, the initial twice-weekly service has now been cut to one flight a week, Uzbekistan Airways said, because of a lack of demand. The return fare of $300 remains prohibitively high for the impoverished populations of Tajikistan and Uzbekistan, whose people have found ways of travelling more cheaply by land between the countries.

The new president's more outward-looking policy also resulted in the reopening on July 11 of a 24km stretch of highway between Tashkent and Uzbekistan's second largest city, Samarkand -- again after repeated delays. The road runs through Kazakh territory, reducing the journey between the cities by about 50km. In 2006 the Uzbek government diverted traffic through its own territory, lengthening the travelling time by an hour to nearly four hours, after Kazakhstan refused to close makeshift bazaars along the road. Tashkent regarded the bazaars as a customs black hole because Uzbek motorists and passengers passing through Kazakhstan seized the opportunity to snap up bargains.

"The accession to power of Shavkat Mirziyoyev has undoubtedly injected some new life into Uzbekistan's foreign policy," said Luca Anceschi, a lecturer in Central Asian studies at the University of Glasgow. "The change in attitude, especially if compared with the passive isolationism of the late Karimov era, is very evident."

He added: "Reopening air links with Dushanbe and inaugurating a railway service between Tashkent and Almaty brings the Uzbek capital to the core of a potentially new connectivity network, reconciling in some sense its central geography with a more active policy role."

Uzbekistan is also endeavoring to rejuvenate relationships with Tajikistan and Turkmenistan. In the past, Karimov threatened Tajikistan with war over the construction of the Rogun dam, which is under construction on the Vakhsh River in southern Tajikistan. If completed, Rogun will become the world's tallest dam, but Tashkent fears it will deprive Uzbekistani cotton farmers of water for irrigation. In 2002 Turkmenistan's first president, Saparmurat Niyazov, accused the Uzbek authorities of aiding an attempted coup, and sent troops to the border with Uzbekistan.

Despite the new openness, Tashkent's nearly two decades of isolation from its neighbors, and the impact of regional transport projects, have dented its chances of becoming a major regional hub in the short term, said Marat Musuraliyev, an expert on Central Asian infrastructure at the Smart Business Solutions Central Asia consultancy in Bishkek, Kyrgyzstan. But the thaw in Uzbekistan's relations with its neighbors will have a favorable long-run impact on regional cooperation and trade, he said.

Problems with transiting Uzbekistan prompted Kazakhstan and Turkmenistan to build a 1,000km railway link along the Caspian Sea in 2014 to connect China and Iran. Hoping to tap the enormous transit potential, Kazakhstan opened a second railway link to China in 2012, bringing the total design capacity of the railway routes to over 80 million tons of cargo a year.

Dushanbe has also been forced to look for other options by Uzbekistan's failure to repair a railway bridge on the border with Tajikistan after an alleged terrorist attack in November 2011 -- the damage prevents shipments of construction materials and equipment for the Rogun dam. The leaders of Turkmenistan, Tajikistan and Afghanistan have signed an agreement on the construction of a 400km railway line that would bypass Uzbekistan, although disagreements about the line's route in northern Afghanistan have stalled construction.

China's push for cooperation in the region may revive interest in a long-mulled project to build a China-Kyrgyzstan-Uzbekistan railway line to connect Kashgar, in China's western Xinjiang Province, with the Uzbek town of Andijan via Osh in Kyrgyzstan. The idea, first floated in the early 2000s and rekindled in 2012 when China made commitments to help Uzbekistan build a line to link its eastern and central regions, stumbled when Kyrgyzstan protested against the proposed direct route. It argued for a longer route linking its north and south across high mountains and bringing the country clearer economic benefits.

Such a line is technically feasible, said Musuraliyev, but he questioned the economic feasibility of shipping goods through the mountains, especially since Kazakhstan has already linked its networks with those of China. "Another issue is the financing of the project, because Kyrgyzstan cannot afford new loans as it has reached the 60% limit [set by Kyrgyz law] of foreign debt to gross domestic product," he said.

Even if China provides funds for the construction of the railway line to Uzbekistan via Kyrgyzstan, genuine integration in Central Asia will depend on the political will of regional leaders. "These developments are positive for the ultimate aim of reintegration in Central Asia, where the regional states do not trade with each other and where national leaders pursue cooperation in name only," said Anceschi.