TOKYO -- Asian economists have revised upward their growth forecasts for the economies of Singapore and Indonesia, thanks to quicker rollouts of coronavirus vaccines, a recent survey shows.

The Japan Center for Economic Research and Nikkei conducted a quarterly survey from Mar. 5 to 26, collecting a total of 40 answers from economists and analysts in India and the five biggest members of the 10-nation Association of Southeast Asian Nations -- Indonesia, Malaysia, the Philippines, Singapore and Thailand.

Economists see that the five ASEAN countries will achieve positive growth in 2021, following sharp drops in last year. They revised up growth projections for Singapore, Indonesia and India, from the previous survey conducted in December.

Singapore is expected to achieve economic growth of 6.1% this year, up from 4.5% previously forecast. Indonesia's gross domestic product is seen expanding by 3.9%, up from 3.6% in the last survey. The forecast India's GDP growth was 11.2%, up from 9.1% expected in December.

The key reason for the upward revision is both countries' relatively successful vaccination programs. Indonesia, which was one of the worst-hit countries in the region by the pandemic last year, had launched a mass inoculation campaign in January. 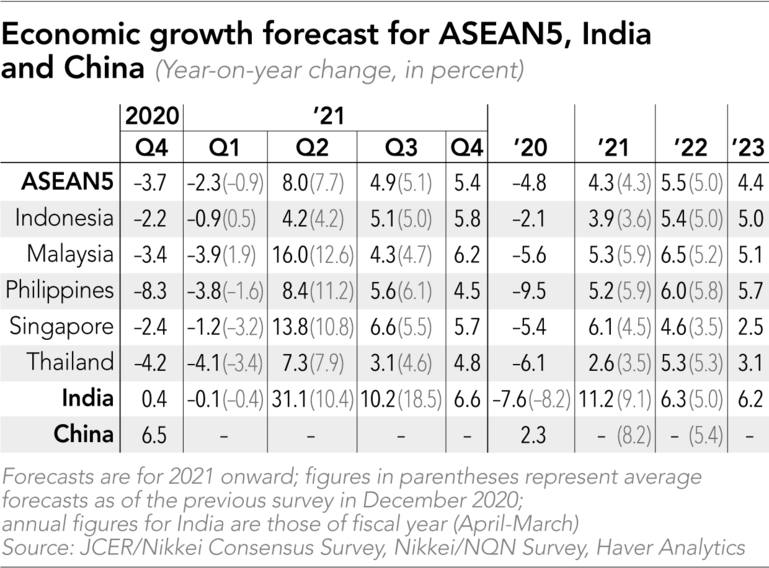 "We expect the vaccination to be a game changer for economic growth and recovery in 2021 to achieve the normal or pre-COVID-19 pandemic [level of] 2019," Jakarta-based Bank Mandiri's Dendi Ramdani said.

Wisnu Wardana at Indonesia's Bank Danamon agreed: "Vaccine rollout has improved, and [is] relatively better than [those of its] peers."

Monetary policy in Indonesia has also helped, Ramdani said. "Low interest is a positive thing to support economic recovery." The JCER survey showed that analysts expect Indonesia's interest rate to hover around 3.55% in the second half of 2021, down from 3.75% in the last quarter of 2020, but higher than the current 3.5%.

Wardana said, however, that he did not think that interest rates would rise this year. "We believe that [Bank Indonesia] will leave its policy rate at 3.5% in the foreseeable future. The first-rate hike will be in 2022, assuming domestic recovery is on track."

Singapore is also expected to bounce back this year, although its growth depends on external demand, given its reliance on exports. Manu Bhaskaran at research and advisory firm Centennial Asia Advisors in Singapore said: "As the progressive delivery of vaccines paves the way for the major global economies to reopen and normalize, headline GDP growth in Singapore should outperform."

The country's rapid COVID vaccination rollout has now reached almost 7,000 per million, based on a rolling seven-day average in mid-March, a far higher number than in other Asian countries, according to data by Our World in Data. Given its small urban population of just 5.7 million, its mass vaccination program been easier and quicker to roll out. Economists expect India also to make a rapid recovery in 2021, if it is able to keep up the current pace of vaccination. The country is facing an explosion of cases, reporting 103,558 new infections on April 5, the highest one-day jump. There are now 12.59 million COVID cases in the country and 165,101 have died of the disease.

However, Tirthankar Patnaik of National Stock Exchange of India, said that the government's strong fiscal response and higher capital expenditure would help the economy to return to pre-pandemic levels by the last quarter of this year.

Dharmakirti Joshi of India's CRISIL, India-based rating agency, was even more optimistic, saying that he expects India to bounce back by end-September.

The economies of Singapore, India and Indonesia are seen to have contracted by a smaller margin than Malaysia, the Philippines and Thailand for the January-March period.

The full-year projections for these three countries were also revised slightly downward. While they have started to vaccinate their populations, they are behind Singapore, India and Indonesia.

Carlo Asuncion at the Union Bank of the Philippines expects domestic economy to only rebound to pre-pandemic levels by middle of 2022, if the country is able to roll out vaccination successfully. Asuncion said: "We anticipate that by the end of 2021, 70 million Filipinos will have been inoculated, and the Philippines will have at least reached at least 60% of its population, enough to achieve herd immunity."

Malaysia's 2021 growth forecast was also lowered to an average of 5.3%, from 5.9% due to the resurgence of the infections early January. Wan Suhaimie from Malaysia's Kenanga Investment Bank sees multiple downside risks such as "slower-than-expected" deployment of vaccines and renewed tensions between the U.S. and China or the U.S. and Iran.

Overall, Thailand is expected to be the worst performer, as analysts revised down its 2021 growth to just 2.6%, from 3.5% they predicted in December. "Tourism-related sectors, which make a relatively high contribution to Thailand's employment, were hit hard by the pandemic and will likely require some time to fully recover," said Lalita Thienprasiddhi at Bangkok-based Kasikorn Research Center.

The labor market will continue to be "fragile," Thienprasiddhi said, given World Bank figures that show international tourism receipts make up 12% of Thai GDP. She believed that unemployment among low-income and unskilled workers would remain high, leading to rising poverty and widening income inequality.

The combined growth rate for the five Southeast Asian nations is estimated to reach 5.5% in 2022, an upward revision from 5.0% in the previous survey.

The analysts said that one of the key risks for regional recovery is accelerating inflation. This is especially the case for the Philippines, where inflation is expected to rise to 4.5% in 2021 from 2.7% forecast in the previous survey.

"African swine fever is pushing up pork prices, [while the] global crude oil price is increasing transport costs," Nicholas Mapa from ING Bank Philippines said. Swine fever broke out in China in 2018 and the Philippines is still suffering the effects of that.

Despite Singapore's success in containing the pandemic, economists said rising unemployment is a top risk for the city-state. "Employment issues, including the reaction to a withdrawal of wage support, remain a key risk," said Randolph Tan at the Singapore University of Social Sciences.