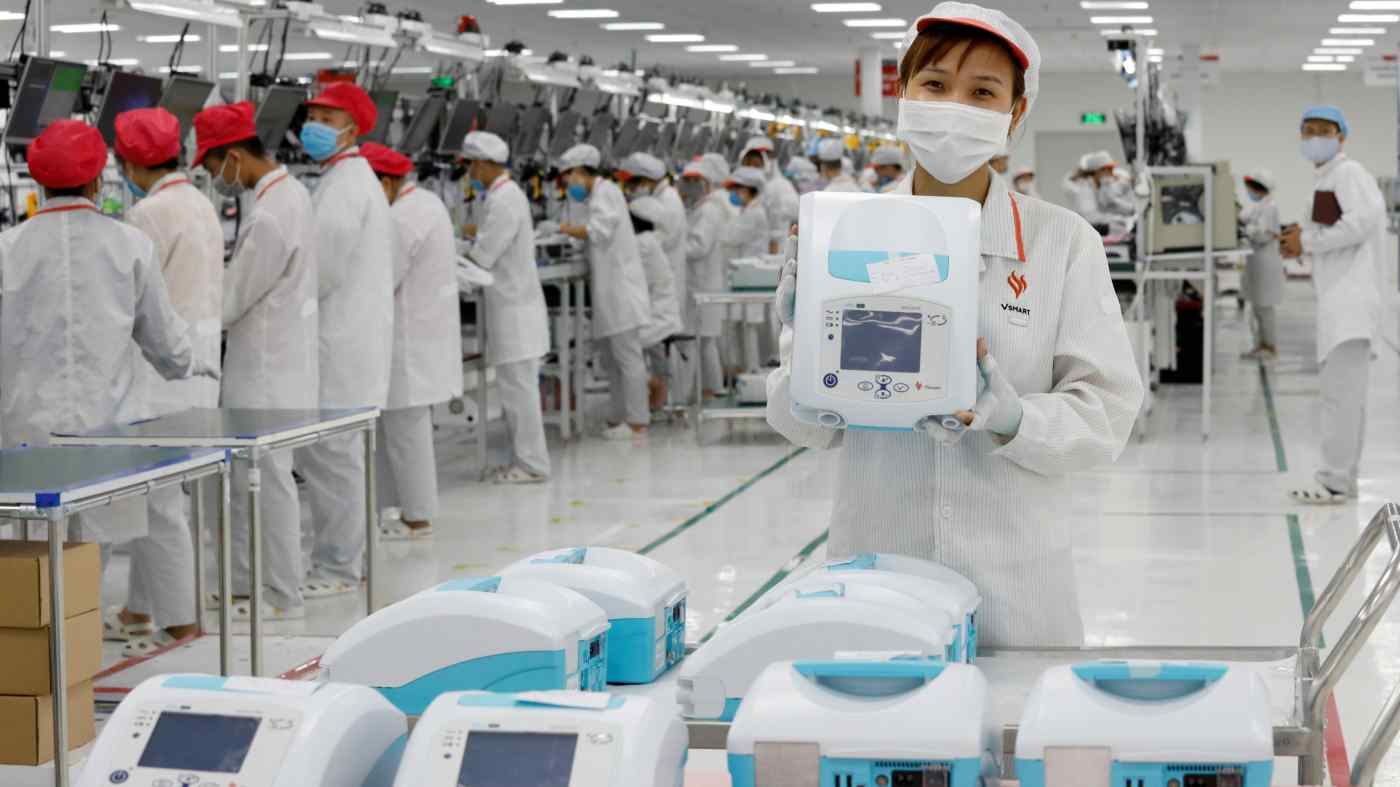 An employee displays a ventilator at a VinSmart factory near Hanoi. Medtronic will buy components made by VinSmart for ventilators to be sold in the U.S. and Ireland.   © Reuters
TOMOYA ONISHI, Nikkei staff writerAugust 14, 2020 12:45 JST | Vietnam
CopyCopied

HANOI -- Vietnam seeks to build on its new free trade agreement with the European Union to expand foreign investment in medical equipment and pharmaceuticals, with the government position the country as an alternative production base to China.

The deal accords with Hanoi's push for local manufacturers to expand into medical products as Vietnam's economy reels from the coronavirus pandemic.

Gross domestic product for the export-led economy grew just 0.36% in the second quarter, down sharply from 3.8% in January-March. The International Monetary Fund forecasts that Vietnam's real GDP growth will drop to 2.7% in 2020 from 7% in 2019.

Medtronic will buy components made by VinSmart and VinFast Manufacturing and Trading to meet the growing demand for ventilators in the U.S. and Ireland. The first batch of products has been shipped earlier this month, the companies said.

For Vietnam, medical equipment is a potential third pillar of manufacturing, along with automobiles and electronics, that the government has sought to raise the company's position in global supply chains.

"Participating in a complex supply chain requiring components with absolute precision and accuracy for Medtronic not only affirms VinSmart's production capacity and technology, but also marks a significant transition to a new level for Vingroup in the road to become a leading industrial company in the region," the company said in a statement.

In the run-up to the EU-Vietnam free trade agreement, which took effect this month, Vietnam authorities and European representatives touted the deal's potential in the post-coronavirus economic environment.

"The transition triggered by COVID-19 is providing an opportunity for Vietnam to export medical equipment, particularly when China is losing credibility among its EU and U.S. partners," Vo Quang Tuyen, former analyst at Pasteur Institute, told an industrial gathering in Binh Duong in June.

Drugmakers' global supply chains were disrupted as the coronavirus spread through China early this year, paralyzing a top producer nation for active pharmaceutical ingredients and their chemical raw materials.

In response to the crisis, many EU companies in China considered relocating their production bases back to their home countries.

"But the production of medical equipment and medicine in Europe will require a complicated process, while they are not very profitable due to production costs. That will bring more opportunities to Vietnam," Nicolas Audier, chairman of the European Chamber of Commerce in Vietnam, told the Nikkei Asian Review.

Members of EuroCham Pharma Group, the chamber's pharmaceutical branch, are expanding their Vietnam presence in anticipation of fresh investment in the communist-led country.

Switzerland-based Novartis in January inaugurated its new legal entity in Vietnam, Novartis Vietnam, becoming one of the first multinational companies in the country to transform from a representative office to a foreign-invested enterprise importer. Novartis said it plans to invest at least $6 million "to strengthen local research and development capabilities."

Swedish-British multinational AstraZeneca said last year it would invest $220 million in Vietnam from this year to 2024.

Vietnam in July laid out a draft plan to develop its domestic health care and medical industry toward 2030 to cater to domestic demands and increase exports. The plan sets targets such as meeting 40% of demand for operating-room equipment, including devices for anesthesia and resuscitation "on the basis of joint production by joint ventures with foreign enterprises."

Vietnam has about 200 companies producing products used in the fight against-COVID-19, such as masks, gloves, goggles and other personal protection equipment (PPE). They plan to increase capacity by 40%this year to meet global demand.

"While massive export orders worth millions of dollars have been placed for Vietnamese companies, including direct orders from the U.S. government, they cannot fully meet them because local manufacturers are small in their size and fragmented, lacking an effective control mechanism," Nguyen Ngoc Tam, strategic adviser at Tuan Duong Company, a medical equipment company told local media.

Vietnamese manufacturers also must address concerns over quality controls issues to participate in global supply chain as health care markets in advanced economies are heavily regulated. Teaming up with advanced companies will be a crucial step to meet standards, including those of the U.S. Food and Drug Administration and the CE mark certification of the European Union.

"We see the crucial need to enhance the current standards, quality assurance and certification system to meet the domestic and export demand. Vietnam can turn the COVID-19 challenge into an opportunity of becoming a leading country in manufacturing PPE for the world," said Sitara Syed, a United Nations Development Program in Vietnam representative.