SINGAPORE/HANOI -- Vietnam is shaping up as Southeast Asia's single economic success story in the coronavirus era, maintaining steady positive growth as other economies struggle to recover.

Vietnam's real gross domestic product expanded 2.6% on the year in the third quarter, marking a second straight quarter of growth amid the pandemic. The International Monetary Fund sees the country rising to fourth in nominal GDP in the Association of Southeast Asian Nations this year, passing Singapore and Malaysia and gaining on the Philippines.

In contrast to other ASEAN economies, Vietnam has succeeded in keeping the virus under control. Rising exports have also helped to drive growth, as companies relocate production from China.

An ultra-large container ship operated by Maersk docked at Cai Mep in late October, a first for southern Vietnam's largest port. While these vessels usually opt for other ports in the region, such as Singapore, Vietnam's growing exports have boosted shipping demand enough to make it worthwhile for ships bound for Western countries to stop there.

This allows for more direct transportation of Vietnamese goods to buyers, which lowers shipping costs, shortens transit time and makes the country more competitive as an exporter. 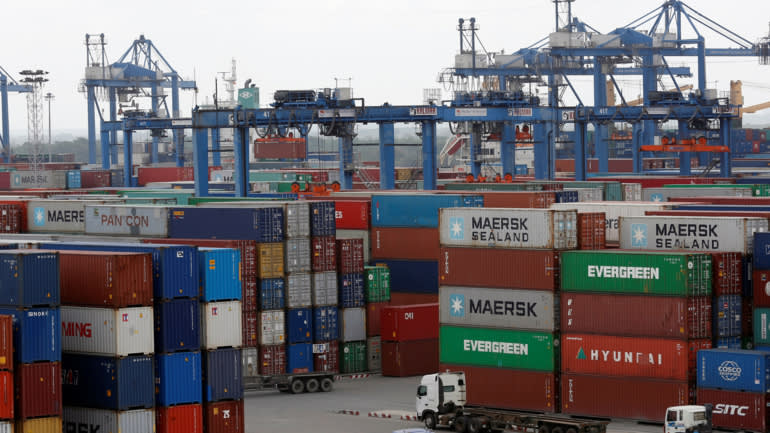 With more goods going out of Vietnam, big container ships have begun stopping there directly, cutting transport costs and time for exporters.   © Reuters

The trade friction between the U.S. and China has benefited Vietnamese trade, thanks to manufacturers relocating factories out of China to avoid American tariffs.

Both multinational corporations and Chinese businesses have moved production to Vietnam to take advantage of its skilled, low-cost labor. Samsung Electronics, which has manufactured smartphones in the country for over a decade, also looks to move personal computer production there as it shuts down a plant in China.

Vietnam has reported just 1,300 or so coronavirus cases to date, keeping the economic impact of the outbreak to a minimum. The country imposed a mass lockdown for only three weeks in April, and normal manufacturing activity resumed faster than it did elsewhere in the region. Job losses were limited, and consumer spending, which accounts for 70% of GDP, has remained solid.

Meanwhile, other ASEAN countries have yet to emerge from virus-induced slumps. The IMF's full-year GDP forecast shows a 1.6% rise in Vietnam, but drops of 6% in Singapore and Malaysia and a 7.1% slump in Thailand.

Malaysia's economy shrank 2.7% in the third quarter, dragged down by a 4% decline in the services sector, which generates nearly 60% of GDP.

Tourism-related industries have been hit especially hard. Occupancy at Malaysian hotels slumped to just 20% in the last week of October amid a spike in cases, according to the Malaysian Association of Hotels.

The industry group warned that without further government assistance, tourism businesses "will be forced to make difficult decisions as well as take drastic actions to survive," suggesting that further job cuts are on the table. Vietnam's per capita GDP of about $3,500 remains well below Singapore's $58,500 and Malaysia's $10,200. But the pandemic is accelerating a shift in the region's economic pecking order.

Cases have been reaching new highs in Indonesia, Southeast Asia's largest economy, while Malaysia has been grappling with a second wave since last month. As long as infection levels remain high, economic activity will stagnate as consumers avoid going out, putting a recovery further out of reach.

Though some ASEAN countries predict a sharp rebound next year, Vietnam could remain the sole economy to see actual growth into the first half of 2021, depending on how the outbreak progresses.

Yet even Hanoi has factors clouding its outlook. U.S. President-elect Joe Biden is widely expected to maintain Washington's hard line toward China, but if he scraps punitive tariffs imposed by the current administration, the migration of manufacturers to Vietnam could slow.

Next year will also see a reduced boost from public works investment, which the government stepped up this year ahead of the Communist Party congress in January 2021. The country's leadership for the next five years will be decided at the event, and how the new government chooses to steer the economy will have a significant effect on Vietnam's competitiveness over the longer term.