HANOI -- Nguyen Phu Trong, head of Vietnam's ruling Communist Party, arrived in the U.S. on July 6, the first trip by such a high-ranking official to the Southeast Asian nation's former enemy. He met with U.S. President Barack Obama on July 7.

Trong's visit shows how much the geopolitical landscape in Asia has changed in the 40 years since the end of the Vietnam War. Hanoi wants to improve ties with Washington to get a better deal in the Trans-Pacific Partnership trade pact, and to enlist U.S. help in its territorial dispute with Beijing in the South China Sea.

Vietnam is taking a risk. It has deep and long-standing ties with Russia and China, but appears to have opted in favor of the practical benefits Washington can offer now and in the future.

Trong praised Clinton for his achievement in re-establishing ties between the two countries. In May and June, U.S. Defense Secretary Ashton Carter and Charles Rivkin, assistant secretary of state for economic and business affairs, visited Hanoi. The careful preparations for Trong's trip to Washington, and the flurry of diplomatic activity that preceded it, underscore the importance both sides place on the budding relationship.

During his trip, Carter signed a joint statement opening the door to a defense cooperation agreement between the former foes. Rivkin, meanwhile, claimed at a news conference that the TPP will boost Vietnam's gross domestic product by 30% over 10 years.

The U.S. charm offensive is aimed partly at swaying Vietnamese public opinion. There is still strong anti-U.S. sentiment in the country. The U.S. military's use of Agent Orange -- a defoliant that causes cancer and birth defects -- during the war remains a sore point for many Vietnamese. And people over the age of 50 have vivid memories of the conflict.

Many Vietnamese officials, including Prime Minister Nguyen Tan Dung, fought against the U.S. People who are seen as pro-American are regarded with disdain in Vietnamese government circles, a diplomatic source said.

On the other hand, there is money to be made dealing with the U.S. Vietnam has invested heavily in the TPP talks because it urgently needs to increase its exports. In 2015, it is likely to log its first trade deficit in four years.

Electronics are a growing part of Vietnam's economy, with companies such as Samsung Electronics and Microsoft setting up factories. Garment-makers are also shifting production from China to escape rising wage costs. The TPP has the potential to give the economy a big lift.

When it comes to the South China Sea, Vietnam would have turned to Moscow in years past for help in its struggle with Beijing. But that is not easy these days with Russia tilting toward China and away from the West over Ukraine. That leaves the U.S., which has consistently taken a tough line with China over territorial issues.

Duong Danh Dy, a scholar who worked as a diplomat at the Vietnamese Embassy in Beijing, said Vietnam needs to develop a more objective view on the U.S. that is forward-looking rather than focused on the past. But it seems unlikely that a U.S.-Vietnam rapprochement will produce concrete benefits right away.

A U.S. ban on arms exports to Vietnam was lifted in October of last year. Although Washington can now sell anti-submarine aircraft, patrol boats and other naval equipment to Vietnam, so far there have been no deliveries. U.S. gear is simply too expensive. And it would not be easy to integrate into Vietnam's arsenal: 95% of the Southeast Asian nation's weapons are Russian, said a Vietnamese diplomatic source.

Vietnam deployed a fourth Kilo-class Russian submarine in June. But Russia does not offer enough crew training so Vietnam conducts drills in India, which uses the same type of subs. Although the Southeast Asian nation would like to have U.S.-made submarines, that will not happen soon.

Nor does signing on to the TPP guarantee a bright future for Vietnam. Prime Minister Dung called for the U.S. to be flexible, suggesting his country wants bilateral concessions on the free trade deal. It is unclear how the U.S. will respond, but it doubled anti-dumping duties on catfish imports from Vietnam in January.

Friendlier relations between the U.S. and Vietnam would have big diplomatic repercussions. 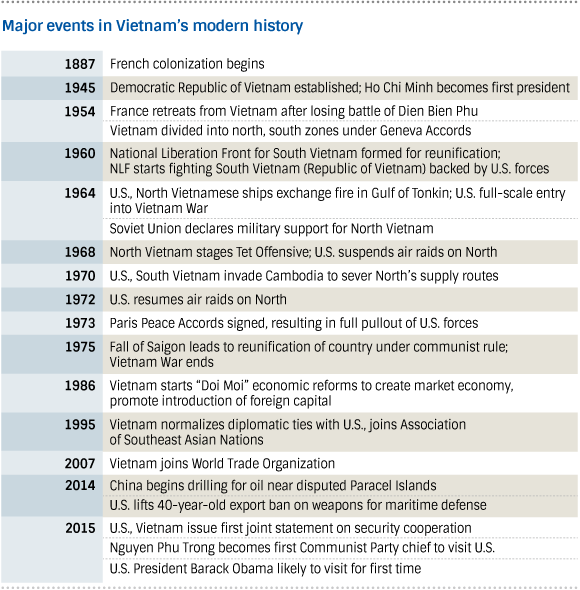 Vietnam's territorial dispute with Beijing notwithstanding, China remains its most important economic partner. The two countries share a land border and the giant to the north accounts for 16.8% of Vietnam's total external trade. Nearly 30% of its imports come from China.

The Vietnamese economy will stall if China restricts trade, so Vietnam will not confront it directly. Instead, it hopes to check its neighbor by moving closer to the U.S. Still, Hanoi is likely to respond cautiously to U.S. calls for more defense cooperation. And it will not want to alienate Moscow by choosing U.S. weapons over Russian wares.