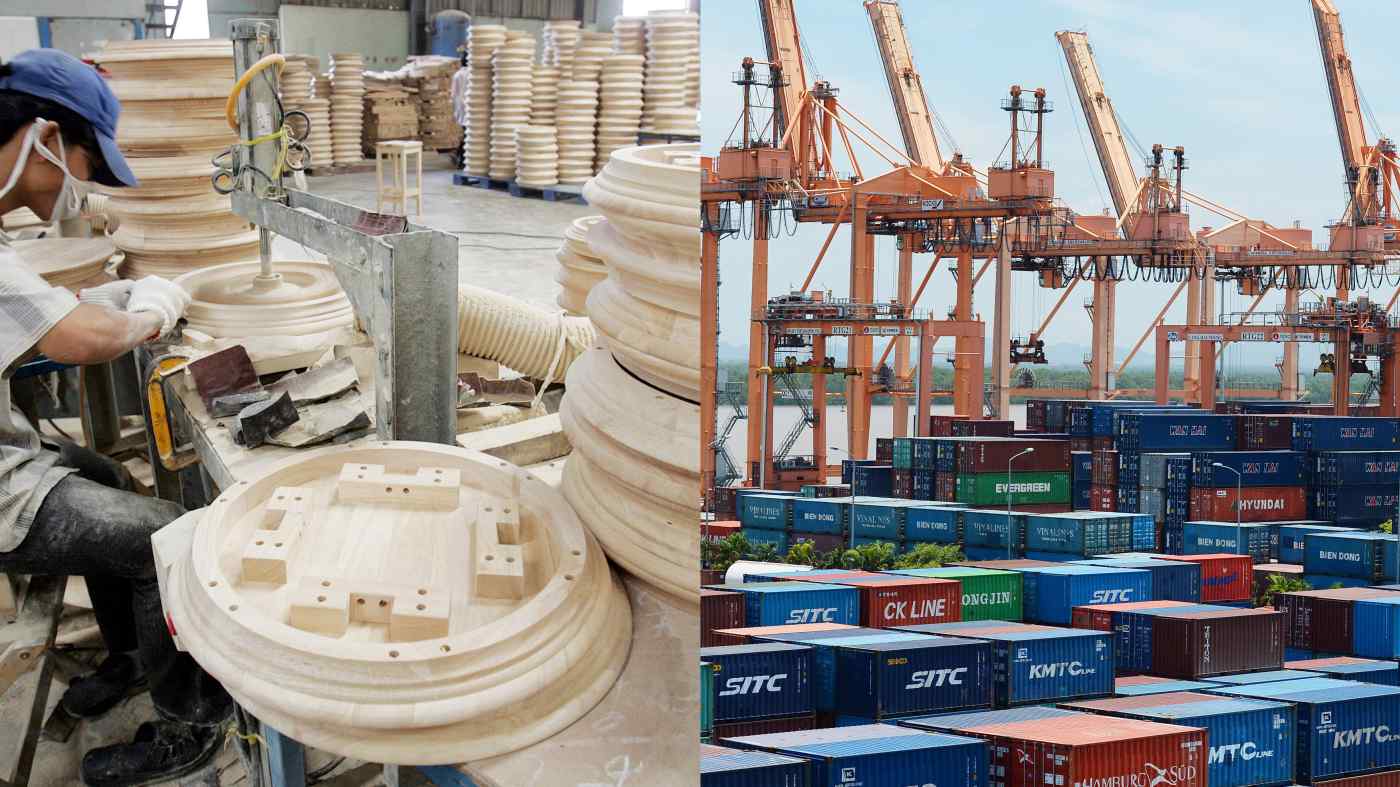 PHNOM PENH -- Vietnam's growing dominance as a furniture exporter is at risk as trade authorities in the U.S., its biggest market, probe the country's timber industry and its ties to illegal logging abroad.

The sector has boomed in recent years, thanks in part to former U.S. President Donald Trump's trade war with China, which saw tariffs as high as 25% slapped on Chinese furniture exports.

But the aggressive trade policy of the previous U.S. administration could curtail those ambitions.

Under Trump, the Office of the U.S. Trade Representative in October launched two investigations under Section 301 of the Trade Act into Vietnam -- one into currency manipulation, and another into the country's timber sector.

The latter is focused on whether Vietnam imports illegally harvested or endangered timber in violation of its own laws, those of the origin country and CITES regulations, which limit trade in protected species.

Phuc Xuan To, a senior policy analyst at Forest Trends, told Nikkei Asia that people within the sector were "very nervous" about potential U.S. tariffs, given that Vietnam shipped about 60% of its wood product exports to America. "The U.S. government's impact on the Vietnam timber market could be substantial," he said.

Environmental activists have welcomed the increased scrutiny of Vietnam's timber trade, saying its authorities have for decades turned a blind eye to illicit timber imports. In doing so, Vietnam, both as a market for luxury hardwood and a transshipment route for China, has contributed to the devastation of tropical forests around the world, they say.

Vietnamese furniture exporters to the U.S. and American importers, meanwhile, have criticized the probe as unfairly tarring all the country's timber exporters with the same brush.

Industry figures, speaking at an USTR online public consultation in December, urged against tariffs, arguing punitive action would hurt U.S. consumers. Sanctions would likely invite retaliatory measures by Vietnam, which is the second biggest importer of U.S. timber in the world, speakers noted.

"This is not a question of a scalpel being more appropriate than a hatchet -- USTR's 301 investigation is more akin to a canon than either of those," said the American Home Furnishings Alliance CEO Andrew Counts during the consultation.

Vietnam is fast becoming a global furniture factory, importing 4.5 million cu. meters of logs from more than 100 countries around the world each year, according to Forest Trends. About half of this is tropical hardwood from Southeast Asia, Africa and South America -- all deemed to be high-risk in terms of the legality of its source.

Outlining its investigation, the USTR referred to "reports" and "evidence" that illicit timber enters Vietnam from countries such as Cambodia, Cameroon and the Democratic Republic of Congo.

As tropical hardwood mostly serves the domestic market, the probe has highlighted a rift between furniture companies exporting to markets like the U.S. or European Union, and those serving local demand.

Xuan To said furniture exporters were "unhappy" that locally-focused importers were flouting laws and jeopardizing their trade, and frustrated with the slow pace of action by authorities. "Domestic legislation is not fully implemented," Xuan To said.

In 2019, Vietnam signed a deal with the European Union designed to reform the forestry sector and smooth the importation of wood from the country to Europe.

The agreement, known as a "Voluntary Partnership Agreement," led to the introduction of new legislation in September. Known as Decree 102, the law sets up what it calls a Timber Legality Assurance System, often abbreviated as VNTLAS, which requires importers of high-risk tropical hardwood to perform extra due diligence.

A Forest Trends report released in April, however, found that importers sourcing from risky countries were not performing the additional steps required under the new law. The study showed many transactions for tropical hardwood were conducted online, often via Facebook or Vietnam chat app Zalo.

"The quality and price of timber are the primary concern for importers, not the legality of [the] timber," the authors wrote. "The operations of this supply chain are complicated, and are always risky, especially in the nations with weak forest governance systems."

Forest Trends called on Vietnam's government to "effectively" enforce the new due diligence requirements, but also directly communicate with authorities in countries supplying the risky timber to better understand legality issues. "This directly affects the survival and development of the industry," they added.

A request for comment sent to Vietnam's foreign ministry has yet to be answered.

Viforest, a timber sector lobby group with 1,300 members, last month took the rare step of writing directly to authorities in Cambodia and Cameroon seeking answers on what documents are available to establish that timber has been legally sourced. These countries' timber trade regulations are opaque, creating challenges for importers in complying with Vietnam's new legislation, according to the letters, which have not been answered.

Viforest has also recommended to the Vietnamese government that it briefly halt wood imports from these countries until their provenance can be verified to protect the domestic sector's reputation. "For the most part, we use wood that's been grown [industrially] and imported wood that's certified," Viforest Chairman Do Xuan Lap said by phone. "But there's still some concern that some natural timber could end up in the mix."

Xuan To said that Vietnam may ultimately need to ban log imports from countries where weak enforcement and endemic corruption make it impossible to guarantee that timber has been legitimately sourced. In Cambodia, multiple investigative reports have found that logging barons enjoy impunity thanks to political connections.

Activists like Ouch Leng have fought a losing battle for decades to save the tropical forests that once stretched across much of the country. Between 2001 and 2018 Cambodia lost 2.2 million hectares of tree cover, about 24% of its total, according to Global Forest Watch. Forest loss was concentrated in protected areas, the monitoring group found.

Having watched for years as trucks laden with illegal timber easily crossed the border into Vietnam, Leng said he was skeptical that the industry could change. "They have never cared about our concerns even when we show them the evidence," he said.