Prime minister calls on South Korea, Japan, US and Europe at business conference 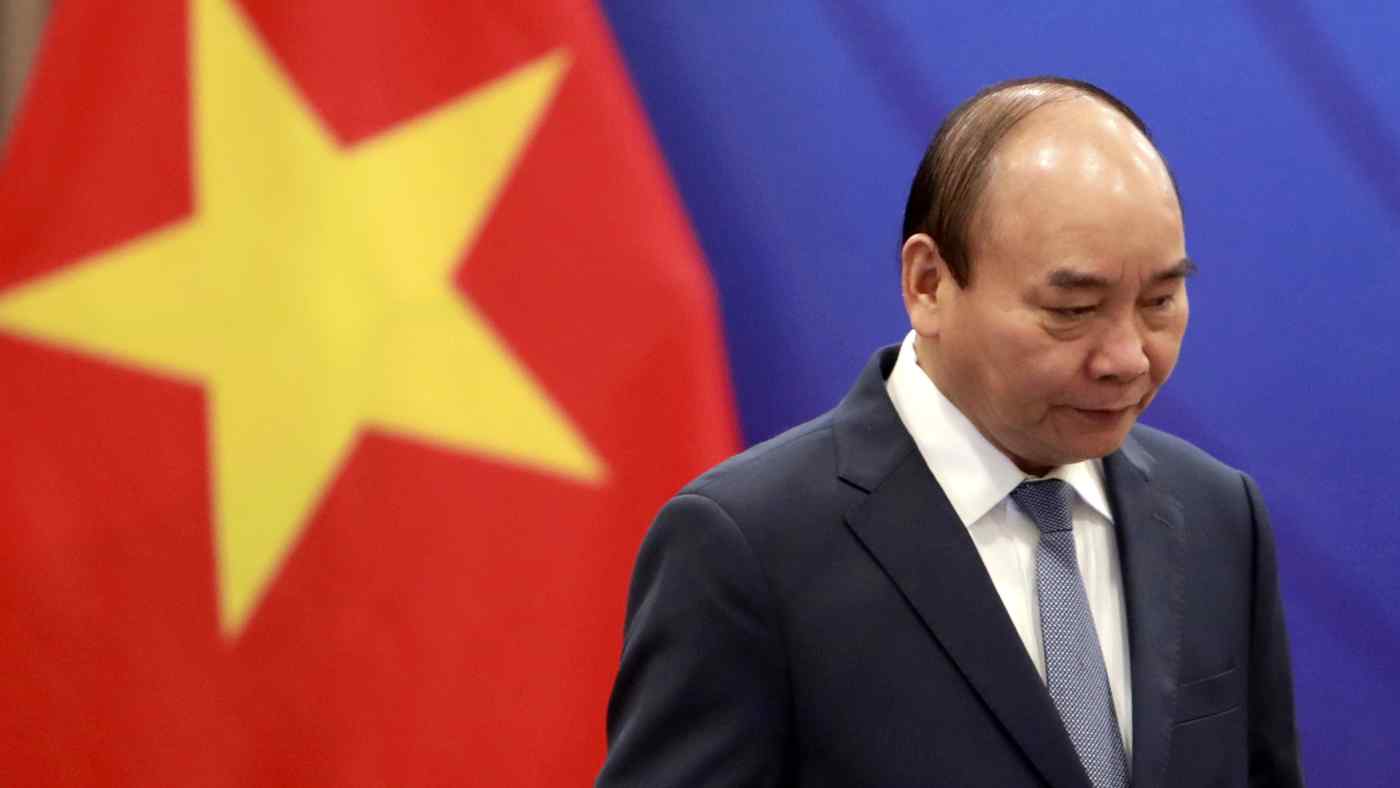 HANOI -- Vietnam is pressing for foreign investment to defend its status as Southeast Asia's fastest-growing economy, just as the country becomes the first in the region to emerge from the coronavirus pandemic.

"We must put our heads together to restart Vietnam's economy with the lifting of social distancing, to reach the target of over 5% gross domestic product growth in 2020," Prime Minister Nguyen Xuan Phuc said Saturday, in defiance of a projection for 2.7% growth from the International Monetary Fund last month.

Phuc spoke at Vietnam's largest-ever business conference, an online event that drew 6,000 participants from the foreign and domestic business communities while over 5 million people nationwide representing local companies and family enterprises watched on television, according to the prime minister.

The event followed Hanoi's announcement Friday essentially lifting all restrictions to contain COVID-19, the disease caused by the coronavirus. The communist-led country on Monday reported 24 straight days without a new infection, while seeing no deaths since the outbreak.

Participants came from the IMF, the World Bank, the Asian Development Bank, the U.S.-ASEAN Business Council, the American Chamber of Commerce in Vietnam, the Korea Chamber of Commerce & Industry as well as groups representing Japan and Europe. Beijing's presence was subdued, as the event was held amid bilateral territorial tensions in the South China Sea.

The prime minister urged foreign investment and called it a crucial factor for surpassing 5% GDP growth this year, along with the local private sector's investment, exports, public investment and consumption.

"Vietnam's economy is like a compressed spring waiting to be stretched out," Phuc said.

"Vietnam and South Korea have overcome this crisis, and I am confident that the relationship between the two countries will become even stronger," Sun said.

South Korea, one of the most successful countries in combating the pandemic, was Vietnam's leading source of foreign direct investment last year. The $7.92 billion in capital from South Korea accounted for 20.8% of foreign investment, which totaled $38 billion, up 7.2% on year. Hong Kong followed by $7.87 billion while Japan and China invested $4.14 billion and $4.06 billion respectively. The vice chairman expressed Seoul's willingness to collaborate with Hanoi to create a bigger manufacturing hub in Vietnam amid the prolonged global trade tensions.

"Korean and Vietnamese businesses will create strong links to use new supply chains in the context of trade conflicts between major economies," Sun said, without citing those major economies at the center of the conflicts.

Tetsu Funayama, representing the Japanese Business Association in Vietnam, also stressed the importance of building a robust supply chain in the Southeast Asian country for the post-COVID-19 business environment.

"Japanese businesses will continue to cooperate" with potential partners in Vietnam, Funayama said. "We will develop and exploit new markets in the country and build a sustainable supply chain system."

Vietnam posted $12.33 billion in foreign direct investment for the January-April period, down 15.5% on the year. Hanoi does not set FDI targets for a single year. SSI Research last year forecast a 7-8% increase in Vietnam for 2020 based on Politburo's plan for the next 10 years. The FDI would account for 22-23% of total social investment.

"FDI enterprises are an inseparable component of Vietnam's economy," said Nguyen Chi Dung, Vietnam's planning and investment minister. "It is important to connect this community with other local business communities in order to grow and develop together, transfer knowledge and technology to Vietnamese businesses and cooperate to create an effective and sustainable business ecosystem."

To facilitate such investment, representatives from these groups asked Vietnam to ease visa issuance. Foreign peers also nudged Hanoi to allow online processing of official documents, while lifting restrictions on flights to countries at low risk for COVID-19 in order to continue operations in Vietnam.

Phuc responded cautiously, saying Vietnam gradually will open its border to low-risk countries and will let experts enter the country on a case-by-case basis.

The business conference came as Vietnam's political leaders prepare for the next Communist Party convention, in January 2021, which will determine the country's new leadership for the next five years.

With this transition looming, boosting economic momentum after the pandemic is Hanoi's priority. The IMF projection for 2.7% growth in 2020 follows two straight years in which Vietnam achieved a 7% increase. A contraction cannot be ruled out.

Phuc stressed the country's management of the coronavirus. Vietnam's GDP growth remains higher than the average for many developed nations under normal circumstances, despite the social distancing measures and the supply interruptions as many countries shut their borders, he said.

"Vietnam's economy suffered supply chain interruption and purchasing power decline from all markets, including China, the EU and U.S. due to the coronavirus," Hanoi based economist Le Dang Doanh said.

To cushion the negative impact, Vietnam's government has expedited public investment disbursements, administrative procedure reforms, private sector development support, a domestic consumption campaign and state-owned enterprise reforms, Doanh said. "If those measures are implemented effectively," he added, "GDP growth of 5% in 2020 is likely to be feasible."