Volcker: Currency steering is not a panacea

WASHINGTON -- The world is not yet embroiled in a currency war, former Federal Reserve Chairman Paul Volcker told The Nikkei in a recent interview. Nevertheless, he said a key lesson of the Plaza Accord -- signed by major economies 30 years ago -- is that countries need to be willing to cooperate to avoid such a conflict. 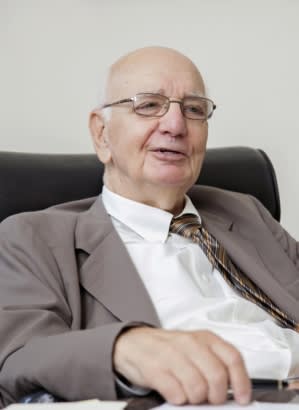 Volcker noted that time and again, the international community has had to learn that tinkering with exchange rates is difficult. Prudent fiscal and monetary policies, he stressed, are also essential for solving imbalances between economies.

Q: This year marks the 30th anniversary of the Plaza Accord. How do you view the pact today?

A: The Plaza Accord was basically triggered because of concern over the high exchange rate of the dollar and the effects of that on the American competitive position. And there were protectionist pressures, so the motivating factor was basically to bring the dollar down, relative to the yen and, to some degree, other currencies.

Q: Was it successful?

A: This is a question to this day. The dollar was coming down anyway. So there's a question as to how much the decisions at the Plaza speeded up what was going on anyway. I don't think we'll ever know the answer to that question, but it certainly helped precipitate a fairly rapid decline in the dollar and [appreciation] of the yen.

Q: The main goal of the accord was to correct international imbalances, wasn't it?

A: Well, the imbalances continued. They could have gotten worse without the Plaza.

Q: Do you think the Group of Five industrialized nations achieved their goal?

A: Well, I think the immediate goal was to get the exchange rates into better alignment. And yes, that happened. Now, it wasn't long before I began worrying that the adjustment measure was going too far. And then about a year and a half later, we had the Louvre [Accord], which was designed to encourage stabilization of the exchange rate.

The Plaza Accord reflected a feeling that international balances should be corrected. The focus was on what was considered the excessive appreciation of the dollar. But the lesson we learned many times over is that it's hard to manipulate exchange rates, and if you want to get rid of imbalances, other elements of policy -- fiscal policy, monetary policy, so forth -- are critically important. I think we learned that over and over again. We learned it in Europe in the problems that they have had in dealing with their imbalances.

Q: Would you say that adjusting the dollar energized the U.S. economy?

A: I think the American economy was pretty well energized before that.

I mean, we'd been doing pretty well. But we did have a big current-account deficit. The American economy was doing OK, but there was concern about the imbalance. It was too big, and it would create a problem.

Q: Changing the subject to today, the yuan's value is low and imbalances between China and other countries are widening. How serious is this situation for the global economy?

A: I can't comment on the current situation at all intelligently, except what you point out as true, [that] there are large imbalances, and they require some kind of policy response internationally. And it's very difficult to make those changes when you have domestic constraints or the appearance of domestic constraints, economic or political. So we're still struggling with the same problem.

Q: The U.S. is urging the Chinese government to pursue currency reform.

A: The Chinese, apparently, have some ambitions over time for the [yuan] to be more important internationally. We'll see.

Q: The U.S. is pushing China to implement other reforms, too, but has had little success.

A: Well, I think the Chinese government is trying to reorganize their economy and do less investment, less infrastructure -- which has been very heavy -- and more consumption. By international standards, their consumption has been low, relative to the GDP. They're trying to change that. And I think that's constructive, but they're having difficulties. It's hard to get the ship turned around.

Q: The slowdown in China's economy has caused very severe turbulence in the financial markets recently.

A: Well, we have a lot of concerns, generally. ... We have a lot of instability in stock markets around the world. That's for sure. But speaking of the United States, in particular, we've had a long succession of a very strong stock market after the 2008 recession. I think for five years or more the stock market has doubled, tripled. It has been very strong. And so, some kind of correction here is not that unusual, probably related to the problems in China. And the problems in China are related to depressed commodity prices. So there are some big changes going on.

Q: Do you think it's a temporary adjustment or the start of another crisis?

A: Time will tell.

Q: A lot of economists say the current situation is different from 2008, when Lehman Brothers collapsed. What is your take?

A: Well, so far as we know now ... there is not as extreme overheating, overleveraging as there was then. But the markets are very complicated. They're very hard to judge. And I think we have to be very cautious about evaluating what's going on.

Q: Are you worried about financial risks outside the U.S.? 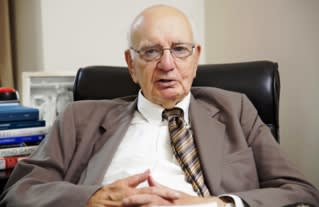 Given the difficulty of consensus-building within the G-20, Volcker calls for leadership by a smaller group of nations.

A: I always worry. I used to get paid for worrying.

Q: What about bubbles? Do you see them in China or elsewhere?

A: Well, you know, it's easier to see the bubbles after they happen. Europe has its own problems, as you well know, which they've been struggling with. I don't think it's exactly a bubble. China has a big adjustment problem. I'm not sure I would call that a bubble, either.

In general, you know, the emerging economies are not so extremely buoyant as they were a few years ago. There are adjustment problems there, too. They've borrowed a lot of money.

We still have very high levels of debt in the world economy, and it's going to be some time before that's corrected.

Q: China's decision to devalue its currency has encouraged other nations to do the same. Do you think a currency war has erupted, and if not, how can we avoid one?

A: I would not call it a currency war at this stage, but we're getting far away from the Plaza. ... I think it's important that we have relationships with China, with Japan and with Europe that are conducive to [an] understanding of what the international requirements are, and a willingness to take action so that we don't have currency wars. That's a lesson of the Plaza.

Q: In 1985, the G-5 was a very strong alliance. Today, the G-20 is a very complicated grouping. How should developed and emerging nations guide the world economy?

You end up with a Group of 20. Twenty is a rather large group to have co-decision-making. And we haven't got an answer to that problem.

I still think we need some informal leadership or formal leadership by a smaller group. The G-20 is not unimportant, but it's difficult for [anyone] to take the initiative, except in the midst of a very large crisis that you want to avoid.