Vying for elite workers, Japan searches for an edge

TOKYO -- Even as globe-trotting professionals draw admiration and envy as engines of economic growth, Japan's efforts to draw in these highly skilled workers often fall flat.

New residency requirements put in place in 2012 to bring in the business elite have removed practical hurdles. But for this country to remain among the world's top innovators, more insidious linguistic and cultural barriers must be lowered as well. 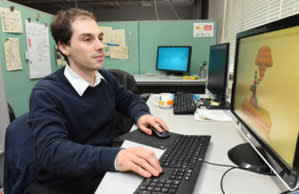 Marius Burkle, a 36-year-old nanotechnology researcher at Japan's National Institute of Advanced Industrial Science and Technology in Tsukuba Ibaraki Prefecture, was hard at work when this reporter dropped by recently, peering intently at models of complex molecules that could be put to use in renewable energy.

An alumnus of Karlsruhe Institute of Technology, one of the top engineering schools in his native Germany, Burkle relocated to Japan in 2012, after completing a doctoral degree. Three years later, he was awarded residency status as a highly skilled foreign professional, allowing him to remain in the country for five years.

The government has been awarding skilled professional designation on a point system since 2012. Successful applicants must score 70 points or higher. Burkle ran through his tally: 30 points for a Ph.D., 10 for working in a research field five years or longer, and another 10 for being between 30 and 34 years old at the time of his application. Additional factors bring the total to 85 -- a figure that would easily clear the government's bar, he said.

Japan is hard at work connecting foreign professionals likeBurkle to companies across the country, hoping to both stoke economic growth and promote innovation. The goal is to award 10,000 foreigners "highly skilled" status by the end of 2020. Why the short stays? Companies and research institutions themselves are more than willing to take on talented foreign workers. Of the 140 corporate chiefs at leading companies The Nikkei surveyed, 89 said they would like to raise the number of such workers their companies bring in. And 84 respondents said they valued the dynamism that diversity brings to a company.

Nor are systemic barriers to employing skilled foreigners particularly high, according to Jean-Christophe Dumont, head of the international migration division at the Organization for Economic Cooperation and Development. A company wishing to do so could bring one on board tomorrow, he said. Rather, the problem lies in the language barrier those workers face, as well as with Japanese workplace customs, Dumont said.

This mismatch was on full display on March 9, when 14 companies, including East Japan Railway, NTT Data and Hitachi, held a career fair  at a University of Tokyo library geared toward "Having people from various countries around will itself create new business opportunities," a representative from Asahi Glass said. An NTT Data recruitor was similarly excited by the prospect, explaining that "unless we recruit talented workers without regard for nationality, there is no way to stay competitive."

About 200 students attended, representing more than 30 countries and regions. But a number appeared doubtful about work in Japan, airing concerns about employers' vague methods of evaluating performance and the possibility of frequent overtime.

This country seems to be having trouble holding on to its own talent as well. In 2014, 34,000 Japanese migrated to other advanced nations. More than 60% of them were women. According to Dumont, 1.1% of Japanese women with a college education or higher leave the country.

In Japan, "hierarchy is determined not by ability but by factors such as age," said Hitomi Kimura, who left Japan seven years ago to start her own business in New York. "I love Japan, but I felt fenced in."

Japan ranks 52nd in the world in appeal to high-skilled workers, according to a 2016 survey by Swiss business school IMD. Improving that ranking to pull in top global talent will require thorough efforts to put aside distinctions of nationality and reward merit on its own terms.

As long as the notion persists that Japanese workers should be given preference, it will be impossible to bring in high-achieving foreigners, said David Atkinson, president of Konishi Decorative Arts and Crafts in Tokyo.

One workplace, Kyoto University's Center for iPS Cell Research and Application, could provide a model to help burnish Japan's appeal. The center's 32 principal investigators include one Canadian, associate professor Knut Woltjen. At first, he said, the barriers of language and culture were high. But the offer of a salary twice what he earned at home was enough to lure him to Japan in 2010.

The unique opportunity to work under Professor Shinya Yamanaka, winner of the Nobel Prize for his discovery of induced pluripotent stem, or iPS, cells, is a large factor in the center's appeal to high-skilled foreign workers. But so is a philosophy that prizes achievement over background or nationality, and the ability for researchers to use English in the laboratory.

Without similar efforts elsewhere, highly skilled foreign workers will not make up much more than the 0.004% of Japan's population they do at present. But lower-skilled workers are another story. The total number of foreigners working in Japan came to 1.08 million at the end of October 2016, according to the Ministry of Health, Labor and Welfare. This is roughly 20% more than a year earlier, 60% more than five years earlier and tops 1 million people for the first time on record.

China provides the largest portion of Japan's foreign labor, at around 345,000 workers. Vietnam comes next, with 172,000, followed by the Philippines and Brazil. Vietnam and Nepal's representation has risen most quickly over the past half-decade, increasing by more than a factor of seven.

Around 200,000 foreign residents are permitted to work in designated professional or technical fields. Another 210,000 are part of Japan's technical intern trainee program, which is designed to transfer technical skills overseas, while a similar number are foreign students working part-time. While residents in the latter two categories are not, by law, in the country primarily to work, they are an invaluable resource for the growing number of short-staffed companies in Japan.

The number of residents on skilled labor visas, which include restaurant workers such as chefs, totaled 38,600 at the end of June 2016, or 22% more than five years prior. Residents permitted to work in the medical services field increased more than fourfold over the same period, in part because medical facilities are employing foreign staff to treat the growing number of foreign residents and tourists in Japan. Meanwhile, fewer foreign entertainers and professionals in the legal and accounting fields are working in Japan now than half a decade ago.

Experiments in Japan's special strategic zones with looser residency and professional licensing requirements could help bring even more workers into fields that are needed in a given area, such as interpreters or skilled food-service employees. This effort to responds to the needs of each region could help Japan cope with population change and recapture its status as a leading technological innovator.