TOKYO -- Toyota Motor has joined Prime Minister Shinzo Abe's trickle-down economic experiment. In the second half of this fiscal year, it will not ask its 450 suppliers to lower their prices. 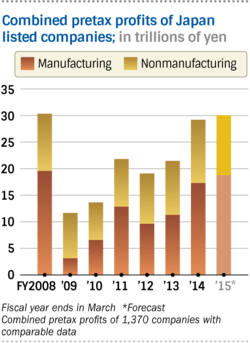 Denso and the other parts manufacturers face a choice: Pocket the profits or hike pay. Ideally, wage hikes will spread from one link in the automotive supply chain to the next, eventually encompassing several thousand small and midsize enterprises.

Many employers complain that they cannot afford to give employees raises, citing increasing raw materials costs. But a broad-based movement to hold prices steady, beginning with Toyota, could make that argument moot. Therefore, the automaker's move is "highly supportive of consumer spending," said a person familiar with Toyota's policy.

When will Japan's prostrate economy get back on the recovery path? The answer depends partly on wages. With listed companies' earnings approaching an all-time high this fiscal year, few can rightly refuse to raise pay because of a lack of cash.

If workers receive raises in April 2015, Japan would move forward on "the second turn of a virtuous cycle," Abe told corporate and labor representatives gathered at his office on Nov. 19.

Nobuaki Koga, president of the Japanese Trade Union Confederation, echoed Abe. Pay increases must continue in a dependable manner beyond the current fiscal year, he said. Koga's organization, known as Rengo, will seek a base pay raise of at least 2% in next spring's shunto negotiations -- its biggest demand in 17 years.

Government and labor insistence suggests that corporate earnings are not trickling down. Ministry of Finance statistics support this view. Japanese companies created 276 trillion yen ($2.33 trillion) in added value in fiscal 2013. The net profit portion reached a record high, 38 trillion yen. Worker share did not. The latter totaled 145 trillion yen, or 4% less than its 2011 peak.

Keidanren, as the powerful Japan federation of businesses is known, will encourage its member companies to raise wages in fiscal 2015, Chairman Sadayuki Sakakibara has promised Finance Minister Taro Aso. But corporate earnings are mixed.

"The government had been telling companies to raise base pay because it wanted to pass another [sales] tax increase," said the head of a midsize automaker. "What we don't want is for people to still expect two straight years of pay raises now that the tax hike is postponed."

Traditional base pay increases "don't fit in, in the age of globalization," argued Toyoaki Nakamura, a Hitachi executive vice president. He added, however, that "when profits rise, it makes sense to return some to employees." But with businesses facing so much uncertainty over policies that directly affect them, not the least of which is a proposed corporate tax cut, "we need to have an environment that's conducive to raising pay," Nakamura said.

Companies will abandon Japan unless they are given reasons to stay. Abenomics' growth strategy component was supposed to give them just that. But it could recede just like the recently postponed sales tax increase, worried a senior executive at an automaker whose product development strategy is to "ignore Japan."

Toshiba is not heeding that advice. The electronics group will pump 500 billion yen into its Japanese semiconductor business, and President Hisao Tanaka says it is open to additional domestic investments. Ideally, honing one's competitive edge leads to bigger profits, higher wages, increased consumer spending and more investment. The government and the corporate sector must not let efforts to create such a cycle lapse after the election.