Waste is in the spotlight as governments think green BANGKOK/KITAKYUSHU, Japan On any given evening, Bangkok's bustling side streets are host to a sight familiar across the region -- around noodle carts and fruit juice vendors, empty styrofoam food boxes and plastic bottles are strewn on the ground, while plastic bags clog curbside sewer gratings.

As with the rest of Southeast Asia, urbanization and economic development have triggered a corresponding boom in Thailand's trash. The country produced 26.85 million tons of garbage in 2015, up 3% on the previous year and 10% since 2010. Of that figure, 51% was disposed of improperly, according to Thailand's Pollution Control Department.

"We have fines for littering but no one seems to care," Wijarn Simachaya, the department's director general, told the Nikkei Asian Review. "We need to step up law enforcement as well as teach people to recycle, reuse and reduce waste." Lack of regulation has stymied improvements in waste management, but authorities in Thailand are starting to catch up. The government is now working to implement garbage separation and recycling programs within metropolitan Bangkok, which generates 15% of the country's waste.

Under the country's waste management reform plan, the government wants 75% of the total waste generated in Thailand to be properly disposed of or recycled in some way by 2021, up from the current 49%. Over the next five years, the government and private sector plan to spend a total of 177 billion baht ($5.1 billion) on improving waste management technology and on public awareness campaigns. 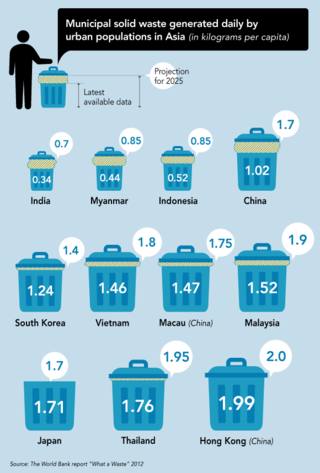 Economic development in eastern and southern Asia is forecast to more than double daily waste production by 2025, according to a 2012 World Bank report, which cited higher living standards and disposable income as twin drivers of the trend.

While developed countries are projected to produce more waste -- some 2.1kg of daily urban waste per capita in 2025, compared to 0.7kg for South Asia -- poor waste management poses additional problems in emerging economies. In many municipalities, for example, plastic bags make their way into drainage systems and rivers, worsening seasonal flooding and compounding economic losses.

To tackle this problem, Thailand's environment ministry has been promoting plastic bag-free days in the retail sector. Central group and 7-Eleven operator CP All are among the retailers that have joined the campaign. The initiative is now in its second year and has changed frequency from monthly to weekly, with a target of reducing use by about 88 million plastic bags this year.

"But this is just a tiny portion of the 1.4 million tons of plastic bags used in the country every year," the Pollution Control Department's Wijarn said, adding that Thailand is considering introducing a plastic bag levy to further reduce consumption.

REDUCING IN SURABAYA While Bangkok prepares to introduce its recycling program, Indonesia's second-largest city has found some success with a program aimed at reducing household waste.

Home to about 3 million people, Surabaya has been working in partnership with the western Japanese city of Kitakyushu to develop waste management solutions for the estimated 1,500 tons of garbage it generates each day.

One success has been the promotion of a household composting program, developed with the help of Kitakyushu-based engineer Koji Takakura. His composting system, a converted 30-liter laundry basket containing easily obtained fungi, has been introduced to nearly 60,000 homes across the city, according to Takakura.

In 2014, municipal authorities decided to scale up the program. Nishihara Co., headquartered in Kitakyushu, built a larger composting center based on Takakura's method, which now processes 10 tons of garbage each day.

However, the composting programs are still able to deal with only a miniscule proportion of the city's total waste production. Wahyu Mahendra, a staff member of Surabaya's environmental bureau currently on exchange in Kitakyushu, said most household waste is still going to the city's sole landfill site, where soil degradation and even accidental fires are rife.

While municipal authorities in Southeast Asia are making some inroads on reducing waste, it could be some time before the region's garbage boom is brought to heel.