SYDNEY -- Kris Botha is running in deep losses as a second wave of coronavirus infections in Australia's state of Victoria forced her beauty salon and spa in a coastal town, about 100 km south of Melbourne, to close for all but five weeks since March.

Her troubles reflect the issues facing thousands of businesses across "the lucky country" that had coasted along without a recession for a record 29 years. Australia is now facing its worst downturn since the Great Depression, compounded by strict mobility restrictions in Melbourne.

"It's tight and it's juggling and it's very anxiety-promoting because you just wonder where it's all going," Botha said.

She is counting on Australia's conservative government to keep the fiscal tap open when it unveils the federal budget on Tuesday. Economists are predicting an additional AU$40 billion to AU$50 billion in stimulus this year, which would drive the country's budget deficit to a record high above AU$200 billion. Australian Treasurer Josh Frydenberg explains the country's economic predicament at Parliament House on Sept. 2. The country's next budget is due to be unveiled on Oct. 6.   © Getty Images

Australia's early lockdown in March was instrumental in containing the spread of the virus and prevented a jump in infection numbers and deaths, unlike the experience in Europe and the U.S.

But a devastating second wave in Victoria during July and August resulted in the country's case numbers quadrupling to over 27,000 while deaths have jumped eightfold to nearly 900.

As a result, Melbourne and surrounding areas have been in a lockdown since early July, and strict stay-at-home orders have meant schools, child care centers, cafes, restaurants and shops have remained closed since.

As case numbers have eased in recent weeks, some measures are being relaxed in a phased manner, but most businesses in the state -- including Botha's -- are only likely to start operating by late October.

Adding to their woes, the government has already started tapering the wage subsidies under its JobKeeper scheme as well as the higher unemployment benefits being paid under JobSeeker.

Botha said the government support has allowed her to keep the business afloat until now.

"It's been very important that we have it," she added. "It's been tough for the government because they're trying to foot the bill for a Victorian problem when the rest of the country is open and happening."

While some payments are being scaled back, Canberra is widely expected to announce a slew of welfare measures on Tuesday, including an extension to the wage subsidy scheme, personal tax cuts, incentives to boost business investment and a scheme to promote home building.

Analysts say absent these measures, authorities would have to brace for a wave of insolvencies with Australia's gross domestic product growth expected to remain weak in the near-term as the tourism, education and retail sectors are hit hard.

Australia's Westpac Banking recently downgraded its growth forecast for the AU$2 trillion economy to 2.5% from 3% in 2021. That is below the 3.75% that policymakers consider trend but far better than the 7% contraction suffered in the June quarter. 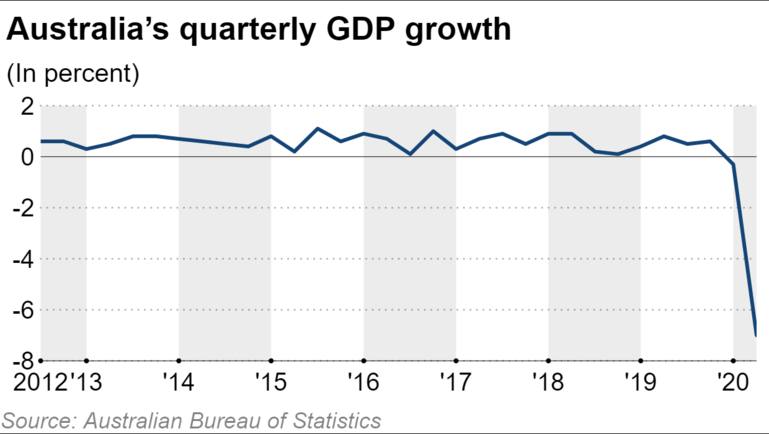 "Many disruptions to the economy will still be apparent in 2021," Westpac chief economist Bill Evans said. "There is likely to be a lift in business failures once government and bank support packages have been withdrawn."

He expects the Australian economy will still be operating below its pre-COVID level at the end of next year.

Australia's central bank too has painted a dour outlook, expecting the unemployment rate to rise to 10% by the year-end and stay elevated around 7% by the end of 2022 compared with under 5% pre-COVID.

The long-term hit to the economy is also making industry anxious.

"We're in uncharted waters, and perhaps we need to have more of a focus in getting the economy up and running," said Mark Edmonds, president of the local Chamber of Commerce at Geelong, a manufacturing hub bordering Melbourne.

"I think winding back fiscal support too quickly is going to have long-term ramifications." 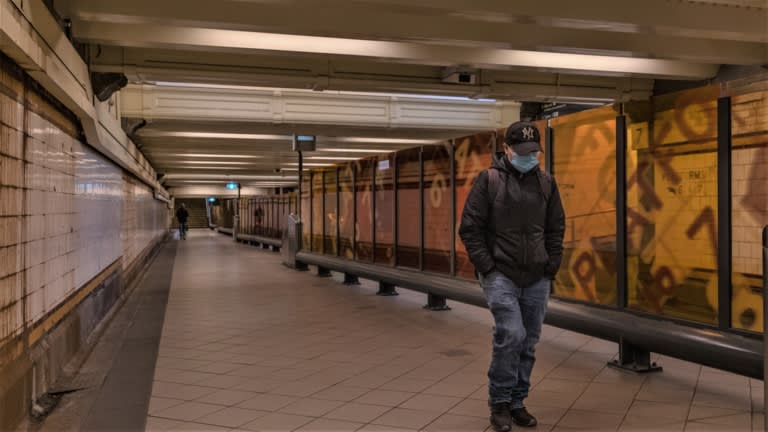 A lone commuter walks though an underpass in Melbourne in late September. Businesses remain under heavy pressure.   © Getty Images

In late September, Treasurer Josh Frydenberg did abandon Australia's efforts to return the budget to surplus in the near term, saying it would be "unrealistic" and "damaging to the economy."

The Reserve Bank of Australia, which made two emergency rate cuts and opened up cheap funding for banks at the start of the pandemic, says it is also assessing various monetary policy options given the weak outlook for inflation and employment.

Economists widely expect the RBA to cut its benchmark rate to a record low of 0.1% in November, according to a Reuters poll.

Meanwhile, many businesses are depending on government support to keep going for now.

When Botha's beauty salon first downed shutters in March, only five of her 11 staff were eligible for the JobKeeper scheme, forcing her to let the others go.

She negotiated a respite in rent from her landlord, deferred payments to the bank on her business loan until October and used up an investment to pay ongoing bills.

"People are finding it very hard to cope with. I think there are a lot of businesses that won't come back," she said.

"But we're hoping that there will be some recognition of what's happening in Victoria and some sort of extension of support that might help businesses getting back on their feet."