What the UK's exit from the EU means for Asian integration

SINGAPORE To Asian leaders who have looked to the European Union as a forerunner in economic integration, Britain's vote to exit the bloc comes as a stunning disappointment.

"The EU is the foremost example of regional integration. This seems to now [be] threatened," Ong Keng Yong, a former secretary-general of the Association of Southeast Asian Nations, told the Nikkei Asian Review.

This reaction is down to more than the fear that Europe's economic union may come undone, bringing more uncertainty to the lackluster world economy. These politicians and officials are shocked that a referendum seen as merely an opportunity to let off anti-EU steam actually produced the result it did.

Ong's successor, former Secretary-General Surin Pitsuwan, sought to distinguish between the EU and ASEAN. The EU "has been our inspiration but not our model," he said.

Indeed, Southeast Asia's incremental strengthening of economic ties based on a respect for diversity and the principle of coexistence differs in nature from Europe's pursuit of political union grounded in a history of continentwide war. But the EU certainly has served as one model of regional integration over the long run. Last year, ASEAN inaugurated the ASEAN Economic Community, a project with economic, social and political dimensions.

LOSING STEAM Brexit deals an embarrassing blow to the European project and will inevitably sap momentum toward integration in Asia. The British people have shown Asians that the lofty but perhaps chimerical idea of union alone cannot drive the gears of political change.

Even before the referendum, efforts at bringing Asian nations closer together had been slackening. Much of the blame lies with the fading promise of the Trans-Pacific Partnership, an American-led initiative on breaking barriers to trade and investment. Those hoping that the U.S. would guide emerging Asian economies to a more market-oriented capitalism now face the possibility of America's own Congress not ratifying the treaty. The rise of presidential hopeful Donald Trump, a man who arguably embodies populism, has shifted the focus of U.S. politics inward.

British Prime Minister David Cameron, who placed too much confidence in his ability to ground ideals in logical substance, was dealt a stinging rebuke by disaffected voters left behind by globalization. Trump's political fortunes spring from the same base. In both countries, a yawning gap can be discerned between the ideals of economic integration and the reality lived by ordinary citizens.

That the leader of a nation with Britain's pedigree in parliamentary democracy felt compelled to hold a referendum -- a tool with the potential to bring out the worst of extreme populism -- and was then so badly burned by it should serve as a lesson to Asian political elites. The moral of the story is that people convinced that their interests are no longer being served may turn en masse on incumbent officials.

Asian leaders are already showing signs of unease. Singaporean Prime Minister Lee Hsien Loong posted on Facebook on June 24: "Other developed countries also face similar challenges as Britain. We all live in a globalized, interdependent world. The desire to disengage, to be less constrained by one's partners, to be free to do things entirely as one chooses, is entirely understandable ... yet in reality, for many countries, disengaging and turning inwards will likely lead to less security, less prosperity and a dimmer future."

INEVITABLE UNITY In Asia, home to a number of nascent democracies, many countries are run from the top down by political elites. China, Vietnam, Laos and Cambodia remain under Communist one-party rule. Thailand is still governed by a junta, and in Myanmar, which has only just embraced democracy, the military remains an imposing force in politics. Even in economic success stories like Singapore and Malaysia, free speech and fully fair elections cannot be taken for granted.

Even so, Asian standards of living are approaching levels enjoyed in advanced economies. By sustaining their peoples' belief in the dream of prosperity, leaders have managed to endow their rhetoric with some credibility. But what would happen if incomes stopped rising? Probably a public backlash against those who espoused a fiction that proved so flimsy. With information flowing across borders as freely as it does today, such an outcome is all the more likely.

To avoid it, politicians must continue touting idyllic visions while also demonstrating practical achievements. Ironically, Asia's small and midsize economies cannot avoid economic integration if they want to keep growing. No matter which way Asia turns, it cannot help but move toward union.

More immediately, countries must brace for the possibility that Britain's choice may depress growth in Asia. The turbulence caused in the financial markets by the unexpected result will continue for a while. This serves as a reminder of the U.K.'s vital role as both a hub for and an actor in trade and investment in an age when the movement of people, goods and money knows no borders.

The U.K. is the world's fifth-largest importer, and approximately 20% of its shipments come from Asia. The country is also one of the world's most attractive destinations for investments. For many Asian companies, it serves as a gateway to the vast EU market of over 500 million people. 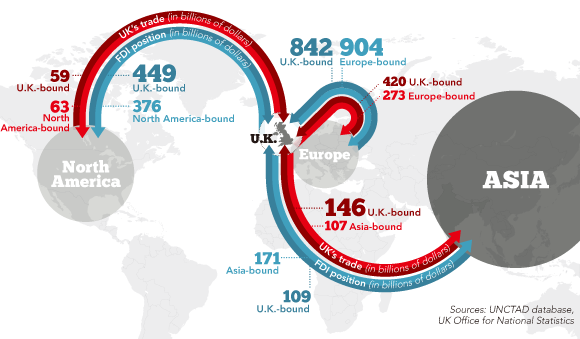 Akio Mimura, head of the Japan Chamber of Commerce and Industry, said Brexit "will have an immeasurable negative impact. It is likely to significantly hurt corporate sentiment, as uncertainties are expected to grow in the U.K. and in all the EU countries for at least the next two years."

India's main software trade body, the National Association of Software and Service Companies, also voiced concerns about the numerous question marks hanging over the situation. "The uncertainty surrounding protracted negotiations on the terms of exit and/or future engagement with EU could impact decision-making for large projects," the group said.

NEW BALANCE? Excluding China, the Asia-Pacific region is expected to produce $87 billion in demand for infrastructure investment through 2020. The U.K. remains one of the region's biggest sources of financing, until a few years ago ranking alongside the U.S. and Japan. Should Britain falter in this role, flows of funding for Asian growth could ebb.

If any country steps in to fill the gap, it is likely to be China. While foreign direct investment flows into ASEAN nations have lost steam since the 2008 global financial crisis, China has consistently increased its investments in the region. The United Nations Conference on Trade and Development forecasts that China will pump in an average of $10 billion annually for infrastructure projects in ASEAN during the 2013-2017 period, nearly 70% more than the annual average to all sectors during 2011-2013.

Chinese President Xi Jinping's "One Belt, One Road" initiative, though dogged by criticism of its opaque motives, nevertheless inspires hope in parts of the region lacking modern infrastructure. The U.K. raised eyebrows last year by becoming the first advanced economy to sign on to the Asian Infrastructure Investment Bank, the Chinese-led multilateral lender seen as creditor to Xi's vision. Call it coincidence or call it an omen, but the bank announced its first project loans around the same time as the referendum.