What will it take for BOJ to open taps further?

TOKYO -- The slide in Tokyo stocks since the beginning of the year is no doubt frustrating for the many investors who were convinced shares would move in the opposite direction. This is only the third time in the postwar period that the Nikkei Stock Average has fallen for four straight months, following similarly long tumbles in 1990 and 1992. The bullish sentiment so pervasive at the start of the year has steadily given way to pessimism. 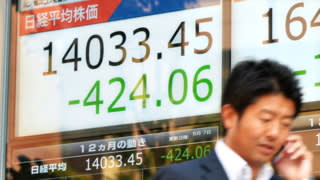 The Nikkei Stock Average took a big tumble on May 7.

The benchmark index plummeted 424 points on May 7, logging its first year-on-year decline since Prime Minister Shinzo Abe took office. If the Nikkei average also end lower in May, it will be entering new territory.

Despite the gloom, Japan's economic fundamentals are by no means unfavorable. The earnings season kicked off in late April, and combined pretax profits for the year ended March 2014 appear likely to rise more than 30% on the year. Business owners have been conservative in their outlooks for the year ending March 2015, but the uptrend in earnings continues. Takashi Hiroki, chief strategist at Japanese brokerage Monex Securities, said the inability of the U.S. economic recovery to push up long-term interest rates have eroded hopes for a stronger dollar. He said there are no factors encouraging investors to buy undervalued Japanese stocks.

But does that really explain why Japanese stocks have been so depressed? An executive at a Japanese asset manager said a rumor that Abe had health problems prompted many hedge funds to sell Japanese stocks during the premier's visit to Davos, Switzerland, for the annual meeting of the World Economic Forum in January. The executive said a rumor was spread that Abe took a restroom break during a one-on-one 20-minute meeting with hedge fund mogul George Soros. Japanese stocks came under strong selling pressure right after the meeting.

Overseas investors were net buyers of Japanese stocks for 2013, with purchases exceeding sales by more than 15 trillion yen ($145 billion). Of that amount, a big chunk came from fleet-footed hedge funds. The executive at the asset management company also said many fund managers did not even know the name of former Prime Minister Junichiro Koizumi. He said although they are called global macro hedge funds, they are nothing more than old-style speculative investors. This may explain why overseas investors' sales have exceeded purchases by more than 1 trillion yen since the beginning of the year.

Speculative trading by hedge funds has been causing Tokyo stocks to yo-yo. The Financial Times in March referred to such funds as "financial tourists," writing about "big macro funds checking in and out, pushing up prices as they arrive and sending them down when they leave." Whether or not that is true does not change the fact that purchases by overseas investors are required if Japanese stocks are to regain momentum.

To ease or not to ease

What, then, will prompt financial tourists to return? A quick solution would be additional easing by the Bank of Japan. At a press conference following a BOJ policy board meeting, central bank Gov. Haruhiko Kuroda maintained his bullish stance, showing confidence about achieving the bank's 2% inflation target. His confidence has a growing number of market players believing there will be no additional easing.

Regardless of the BOJ's recent decision to forgo additional easing, the fact remains that further opening up the monetary taps in the July-September quarter is key to bolstering the Tokyo market. Many private economists are skeptical about achieving the BOJ's inflation goal.

It is possible the central bank will further easy monetary policy when the Government Pension Investment Fund, Japan's pension fund giant, reviews its assets. Under one scenario, the GPIF will sell its holdings of Japanese government bonds to the BOJ and use the money to bulk up its stockholdings. There is speculation this will happen as early as June, when the government is to unveil its new growth strategy.

Strictly speaking, such a development could not be called additional easing. The purpose of the BOJ's unprecedented monetary easing push is to boost Japan's monetary base, which buying government bonds from the GPIF would not do. Market players are skeptical about whether such a move would yield many tangible benefits.

Some players say this scenario originated overseas, as it uses a combination of keywords popular among foreign hedge funds -- "additional easing" and "GPIF."

So what will the BOJ do? A former central bank executive predicts the BOJ will introduce additional easing if the government has a hard time deciding on whether to raise the consumption tax as planned in October 2015.

Looking back to last summer, it was Kuroda who strongly opposed a possible delay in raising the consumption tax as planned in April 2014. The central bank chief said if government bond prices fall in tandem with confidence in Japan's fiscal condition, BOJ monetary policy alone would unlikely be enough to improve the situation. He repeatedly -- and with, to some, startling vehemence -- insisted that the government raise the sales tax as planned.

The former BOJ executive said Kuroda attaches great importance to fiscal discipline, and as such wants to take credit for creating an environment that enables the government to raise the sales tax with the support of a weaker yen and stronger Japanese stocks. He said Kuroda may decide to introduce additional easing to ensure the consumption tax is hiked.

Considering that Kuroda was president of the Asian Development Bank just before becoming BOJ Gov., and was also a finance ministry official, the ex-BOJ executive believes the next monetary policy decision by the top banker will be based on a broader perspective than what might be expected of a typical central bank chief.

At the April 30 press conference, Kuroda said the central bank expects Japan's economy to continue growing, and at a faster clip than the potential rate. But he stressed that the bank's economic and inflation outlooks were premised on a tax increase in 2015. It is clear that a delay in introducing the consumption tax hike is not an option for the governor.

Abe is expected to make a final decision on whether to hike the tax tax in 2015 after assessing Japan's growth rate for the July-September quarter. Debate on the issue will grow this summer, and how that pans out could determine the direction of Japanese stocks.