When will stock market growth trickle down?

TOKYO -- Stamping out deflation for good requires a delay in the next sales tax hike, according to Japanese Prime Minister Shinzo Abe.

The second sales tax hike, to 10%, had been set for next October but has been delayed until April 2017. The postponement comes amid lingering weakness in the Japanese economy since April, when the sales tax rate went from 5% to 8%. 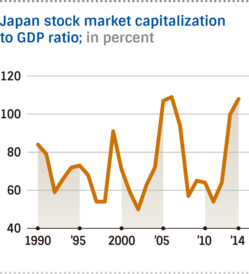 Japan's gross domestic product contracted in the July-September quarter, surprising the market. The Nikkei Stock Average plunged more than 500 points on Nov. 17, when preliminary GDP figures were announced. It had rebounded by the end of the week.

Foreign investors had been bullish on Japanese stocks until the week of Nov. 10, believing that if Abe chose to postpone the tax hike and dissolve the lower house, a general election would strengthen his party's hold on power. The latest GDP figures, however, sent them into a panic. They worried that the weak economic recovery would spark a backlash against Abe's ruling Liberal Democratic Party. According to the latest Nikkei opinion survey, 51% of respondents say they do not approve of Abe's economic policy.

The Bank of Japan surprised markets Oct. 31 by announcing it would flood the financial system with even more yen through its quantitative easing policy. The Nikkei Stock Average gained 12%, or roughly 1,800 points, between the Oct. 30 closing price and that of Nov. 14. It also hit its highest point this year during that period.

The total market capitalization of the Tokyo Stock Exchange was 525 trillion yen ($4.46 trillion) on Nov. 14, surpassing the country's nominal GDP. It has been around 70% of GDP for the past 20 years. The market becomes susceptible when flooded with easy money, which widens the gap between share prices and the real economy.

Pretax profits at publicly traded companies, one factor supporting higher share prices, are projected to increase by 3% from a year earlier in fiscal 2014. They are expected to almost match the all-time high recorded in fiscal 2007, before the global financial crisis.

Higher share prices, however, are not domestically driven. Rather, they are attributable to the weaker yen and the strong U.S. economy. Toyota Motor expects to set record profits thanks to brisk North American operations but downgraded its sales forecast for emerging nations.

Many executives at multinationals are wary of the outlook for the global economy, with Europe and China their biggest concerns. "[The economic] downturn in Russia could even stall the economy in the eurozone," said Toshizo Tanaka, executive vice president of camera maker Canon.

The eurozone could be thrown into deflation by its driving force, Germany, which has been on shaky ground lately.

Construction machinery maker Komatsu saw its China sales fall 14% from a year earlier in the April-September half. Even the October shopping season in China was not as brisk as the company had expected. "The recovery [of the Chinese economy] may be delayed," President and CEO Tetsuji Ohashi said.

China's slowdown is also causing a drop in resource prices. Emerging countries are no longer on a uniform growth track. The only country that seems reliable for growth is the U.S.

One of the focal points for the Japanese economy is whether the wealth effect created by rising equities will spur consumption.

Measures for supporting stock prices are already on the table. These include the BOJ's purchases of exchange-traded funds. Also, the enormous Government Pension Investment Fund plans to increase the amount it puts into domestic stocks.

Companies are also increasing returns to investors through dividends and share buybacks. If the wealth effect so far enjoyed by the rich reaches the wider population, a virtuous cycle, in which increased spending leads to increased investment, will take hold and the economy will recover.