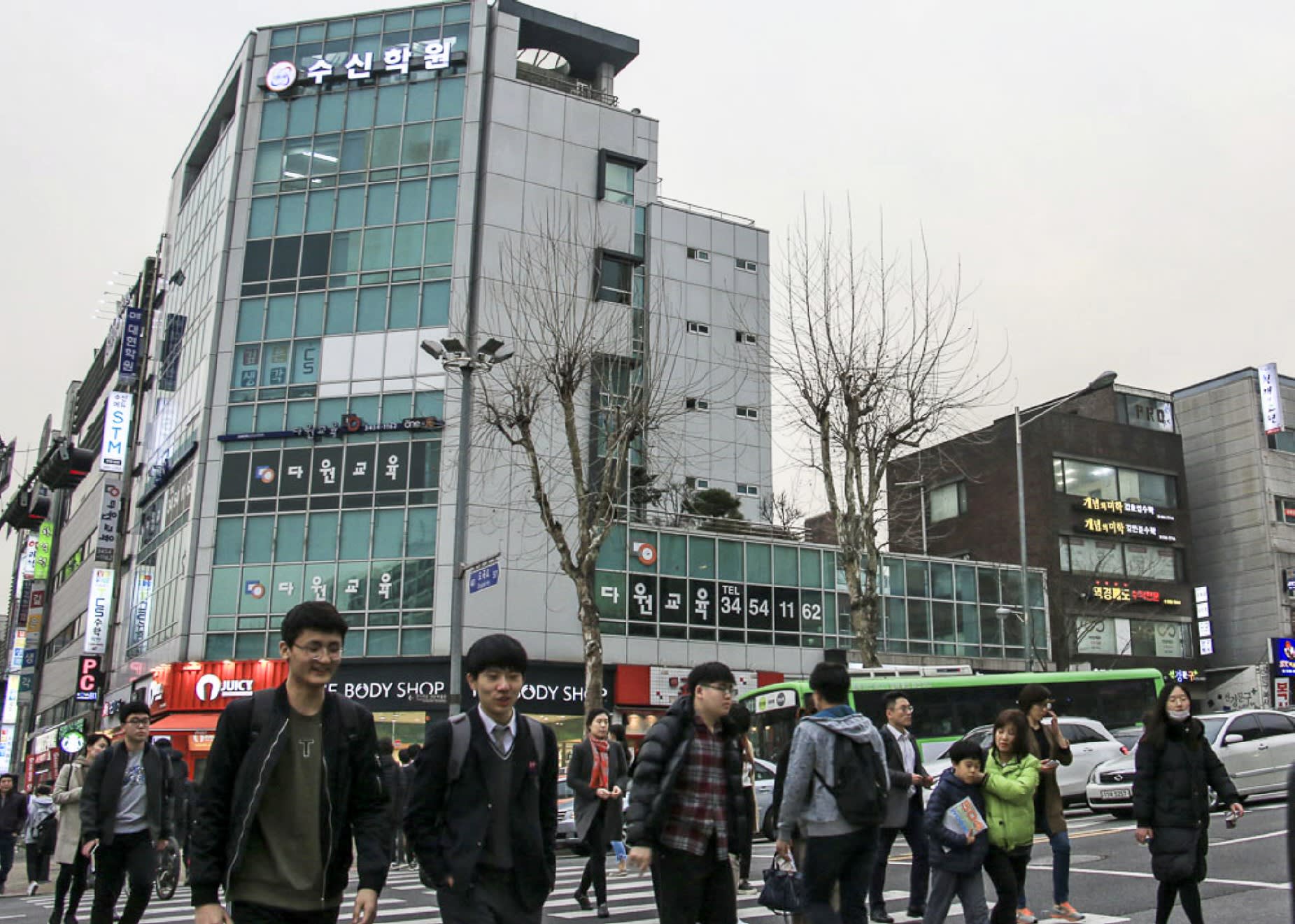 Daechi-dong, in southern Seoul, is a wealthy and well-educated part of the capital.
Economy

SEOUL -- Observers of South Korea -- which just impeached and removed its president from office -- might think the country has enough on its plate.

Apparently not. In the race to succeed the ousted Park Geun-hye, candidates are taking up the issue of the widening gap between rich and poor.

A 56-year-old man who has run a real estate company for more than 10 years in Seoul's upscale Gangnam distric predicts condominium prices will continue to rise for a while.

The Daechi-dong neighborhood, which forms part of Gangnam, has around 500 cram schools in an area of just 3.5 sq. kilometers. It is also one of the richest parts of the country. As of February, the average price of a condo here was 11.29 million won ($10,056) per sq. meter, four times higher than the national average.

Daechi-dong is desirable because it has good schools that prepare students to enter top-notch universities. But even the moderately well off do not live here: Only around 10% of high-income earners can afford homes in the district. As prices continue to soar, it will become even more difficult in the future, the real estate agent said.

In South Korea, where education is the key to a good job and other symbols of success, there is a feeling that the game is rigged for the wealthy few. An opinion poll conducted immediately before President Park's dismissal on March 10 showed that while 50% of respondents aged 60 and over were in favor of the legal proceedings against her, the rate jumped to 92% for respondents aged 29 and under.

The groundswell of anger that ended Park's presidency is another sign of young people's dissatisfaction with the establishment. The widening gap between rich and poor is likely to be the main talking point of the May 9 presidential election; finding a solution will not be easy.

On Mar. 6, Chung Dong-young, a lawmaker from the People's Party, the second-largest opposition group, said there is a huge gap between haves and have-nots with respect to housing. Although South Koreans' wages have risen sixfold since the country moved to democracy in 1988, condo prices in the Gangnam district have risen by a factor of 264 over that period.

With home prices surging even under the left-leaning Roh Moo-hyun administration from 2003, it has become impossible for ordinary workers to own a house, Chung said.

Park vowed to help large and small companies coexist and narrow the gulf in incomes immediately after she took office in 2013. But she came to rely on rebounding real estate and asset markets to prop up the sluggish economy around the middle of her term.

With labor market reforms faltering, South Korea's youth unemployment rate has been climbing, reaching 9.8% in 2016. Young South Koreans call their country "hell Joseon," which combines an old name for Korea and with the discontents of modern life.

During a March 14 TV debate, Moon Jae-in, the former leader of the main opposition Democratic Party of Korea and the front-runner to replace Park, vowed to fix the economy and grapple with problems faced by ordinary South Koreans. If so, he will have to do better than his mentor Roh. Moon has yet spell out his program for improving their lot.