Widodo gets second wind for reforms

JAKARTA It is one year and seven months since Indonesian President Joko Widodo took office. The first year of his tenure was characterized by an unstable administration and unclear management, partly due to gross domestic product growth slipping below the 5% mark.

Since the start of 2016, however, Widodo has managed to shore up support for his administration, the economy has been on the up with lower oil prices helping drive down consumer prices and the rupiah has stabilized. The country's extensive infrastructure development program, for which Widodo has high hopes, is finally making progress.

"Now Indonesian politics is stable," said Widodo in an interview with The Nikkei on May 24. For a man usually so careful in choosing his words, bold statements like this are something of a rarity. But his coalition now makes up some 70% of parliamentary seats, having started out as a minority government. 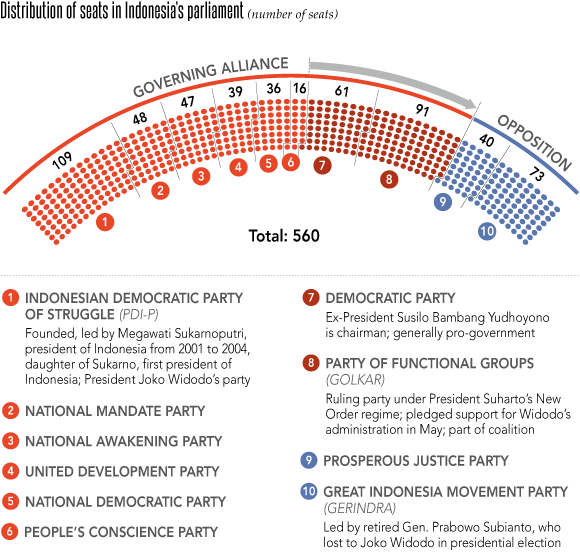 The major turning point came on May 17, when Setya Novanto, the new chairman of the Golkar Party, then the largest opposition force, officially declared its support for the president's coalition. Golkar, the political vehicle of former authoritarian ruler Suharto, had been part of the government throughout the administration of Susilo Bambang Yudhoyono between 2004 and 2014.

Many observers now see Widodo's reelection in 2019 as a foregone conclusion.

Golkar had lined up against Widodo in the 2014 presidential election as a member of the Koalisi Merah Putih, or Red-White Coalition, of former Gen. Prabowo Subianto. With Subianto's defeat, Golkar failed to make it into government for the first time ever.

At the end of last year, Golkar's newly elected head Novanto was forced to resign as house speaker in the face of allegations of soliciting kickbacks from U.S. company Freeport-McMoran's subsidiary in return for helping the miner extend its operating license at a gold mine in Papua Province.

Immediately before Golkar elected its new chair, Luhut Panjaitan, a close aide to the president, called candidates in separately for meetings, leading to rumors that Novanto becoming party chairman had been engineered.

Though the rumors have been denied, Widodo did suggest that his aide may have moved quietly behind the scenes. In a speech at the opening session of the Golkar party convention in Bali, the president said, "Many people have asked me why Pak Luhut called and arranged for a meeting with regional [Golkar] leaders. I told them that Pak Luhut was on its advisory council." As one political analyst sees it, the Widodo administration managed to win over Golkar after weakening the party by getting a man suspected of taking bribes installed as its top executive.

The presidency has traditionally been held by members of Indonesia's elite, such as aristocrats and military officers. Widodo, the seventh president, is the first from a modest background. He draws support not from a party or the military, but from the public. A February survey by the Indonesian newspaper Kompas put his approval rating at 84.4%, up 11 percentage points from October last year.

Having shied away from party management for much of his career, Widodo's influence within the Indonesian Democratic Party of Struggle, or PDI-P, remains weak. But solid support from voters made it possible for him to manage the demands of party heavyweights, such as PDI-P chief and former president Megawati Sukarnoputri and Jusuf Kalla, vice president under both Yudhoyono and Widodo.

When he found himself at loggerheads with Megawati over the selection of the national police chief, public opinion backed Widodo, forcing the former president to back down.

Widodo has been pragmatic in his choice of cabinet members, picking them on merit, without the hindrance of party politics. In a cabinet reshuffle on Aug. 12, 2015, the president was ruthless in wielding the ax over ministers who had failed to perform.

But if Widodo's success in pulling opposition parties into the ruling camp were to hint at a return to conventional party politics, he could lose public support. Indonesians are paying close attention to how well the president can keep resisting pressure from the various elements of his coalition. Their fears stem from the days of President Yudhoyono, when almost all parties, including Golkar, joined the ruling coalition. Perquisites made available through political arrangements were distributed throughout the various factions, leading to a succession of corruption scandals, including the arrest of a cabinet member.

REASONS FOR HOPE The Indonesian economy appears to be back on track. The country's gross domestic product grew 4.92% in real terms in the January-March quarter of this year, slightly below the 5.04% for the preceding quarter. Nevertheless, expectations are spreading that growth will pick up again with the government's infrastructure spending gathering pace. Nomura Securities' "Asia Special Report" dated May 19 revised Indonesia's projected growth rate for 2016 to 5.4% and that for 2017 to 5.8%. The report, titled "The Great Revival," has been shared among the cabinet, spreading optimism. 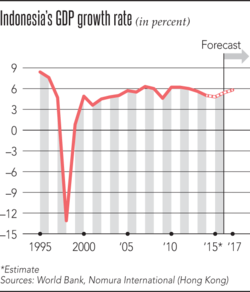 With domestic politics and the economy stabilized, Widodo is enjoying greater latitude in managing the government. He has now turned his attention to diplomacy. He once declared his priority to be domestic issues rather than challenges abroad. However, since October last year, he has visited the U.S., Germany, the U.K., the Netherlands, South Korea and Russia.

Especially conspicuous has been his economic diplomacy. On April 23, when he returned from Europe, Widodo announced that Indonesia had exchanged memorandums on projects and other investments worth a total of $20.5 billion. The projects included an agreement between major Indonesian mining and metals company Aneka Tambang and two German companies, including Ferrostaal Industrial Projects, to build a ferronickel plant in Pomalaa in the Indonesian province of Southeast Sulawesi.

But aside from the president's salesmanship, Indonesia's presence in diplomatic circles remains weak. An Indonesian diplomat said the president was too concerned with figures, implying there is little focus on issues such as disputes in the South China Sea and counterterrorism. Widodo's remarks on these issues have largely been general statements.

Donald Weatherbee, professor emeritus at the University of South Carolina and a specialist on Southeast Asia, compared Indonesia's foreign policy in Jakarta on March 16 to Garuda, a mythical bird that serves as the national emblem. The forum, titled "Garuda Hovering: What Directions for Indonesian Foreign Policy?" was jointly held by the Indonesian Ministry of Foreign Affairs and the United States-Indonesia Society. "The Garuda hovered and looked for a direction, for which course it would follow in the future. We're not quite sure where it's flying," he said. The world now waits to see which way Indonesia will fly.