Infrastructure is in vogue in Asia. There is increasing debate about its role in improving inclusive economic growth and the difficulty of paying for the $8 trillion worth of roads, bridges, power lines and other improvements the world's most populated and dynamic region needs. There is a scramble for new infrastructure financing from the private sector and a new regional development bank.

Yet there is little discussion of infrastructure's role in linking different parts of Asia. Improving physical connections between South Asia and Southeast Asia is particularly promising; it could transform the lives of millions of people. Moreover, the opening up of Myanmar -- the key land bridge between the two subregions -- increases the potential for infrastructure-led regional integration.

A study led by the authors, just published by the Asian Development Bank and the ADB Institute, highlights how investment in hard and soft infrastructure can deepen economic ties between South Asia and Southeast Asia. The study, "Connecting South Asia and Southeast Asia," mapped emerging economic ties between the two subregions, identified critical transport and energy projects, and estimated the potential economic effects of closer, infrastructure-led regional integration. 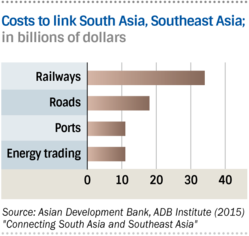 One of its most striking findings is the vast size of potential economic gains from infrastructure-led integration, amounting to at least $568 billion. This is a conservative estimate under a comprehensive integration scenario. The study finds that more populous South Asia would see a larger gain of $375 billion (8.9% of gross domestic product) than Southeast Asia's $193 billion (6.4% of GDP). Most participating countries show large gains, especially the smaller countries of South Asia. The comprehensive integration scenario involves:

Another important finding is that only $73 billion -- a relatively small sum compared with the infrastructure spending requirements of Asia as a whole -- is required to meet the total cost of linking the two subregions. This includes $34 billion for railway projects, $18 billion for roads, $11 billion for ports and $11 billion for energy trading.

Key barriers to cross-subregional transport are found mainly in Myanmar, while other gaps have been identified in Bangladesh, Cambodia, Laos, Thailand and Vietnam. These include:

Major ports, such as Kolkata in India, Chittagong in Bangladesh and Yangon in Myanmar, suffer from constraints in capacity, efficiency, and connectivity to road and rail networks. Various impediments hinder energy trading, including technical barriers related to grid synchronization, gaps in natural gas pipelines, and distorted energy pricing and subsidy regimes.

The study also suggests financing infrastructure-led integration in the region is problematic, and that public-private partnerships, or PPPs, could be an important part of the solution. It is notoriously difficult to get infrastructure funding from private financial markets alone. Regional projects, in particular, suffer from classic market imperfections arising from high risk and long gestation periods, information asymmetries between lenders and borrowers, and unequal distribution of costs and benefits across countries.

Plug in, turn on

Linking South Asia and Southeast Asia would create a regional market of 2.3 billion people with rising purchasing power, leading to eventual Asian integration and rising prosperity. An innovative regional infrastructure scheme with transport and energy projects at its core could provide the required connectivity. Financing may be challenging, but public-sector investments, coupled with infrastructure project bonds and PPPs, could provide ways forward.

The significant investment costs of individual projects, the multiplicity of projects and human capital constraints call for a sequenced approach to cross-region infrastructure investment.

Coordinating the planning and implementation of regional infrastructure investment projects is another challenge. Underinvestment often occurs in regional projects. Governments and the private sector should get together, prioritize regional projects and build them into budgets and business strategies.

The current institutional landscape for coordinating regional infrastructure connectivity is populated by several, and at times overlapping, institutions associated with the Association of Southeast Asian Nations, the South Asian Association for Regional Cooperation and other organizations. These blocs vary in terms of their mandates, financial resources and capacity to support regional connectivity.

Closing coordination gaps may require a retooling of existing institutions and the creation of new ones to forge economic links. Multilateral and regional development banks can play a useful role as honest brokers in coordinating regional projects, as well as in providing finance and technical expertise.

The time is right to better connect South Asia and Southeast Asia. China's slowdown implies that South Asia and Southeast Asia need to take bigger steps to develop their own sources of growth. Furthermore, the opening up of Myanmar means infrastructure-led regional integration will be easier than before. A pro-business Indian government provides an impetus for deepening domestic reforms and implementing an eastward-facing regional policy using cross-border investments and regional trade agreements. With national and regional policy attention, the integration of South and Southeast Asia can become a reality.