TOKYO -- In its monthly Communist Party Politburo meeting on April 30, the Chinese leadership signaled it may increase public spending. While doing so could give the economy a boost, it could also deepen the fiscal deficit. Beijing has some tough decisions to make -- ones that will impact not only China but the entire world.

Few are aware that China has set a target of holding its ratio of fiscal deficit to gross domestic product to within 3%. Beijing had essentially kept that target under wraps before it embarked on a 4 trillion yuan ($645 billion at the current exchange rate) economic stimulus program in response to the crisis triggered by the Lehman Brothers collapse in 2008.

China's massive spending surprised the world and raised the country's deficit to GDP ratio to almost 3% in 2009 from slightly below 1% in 2008. It was around that time that then-Chinese Premier Wen Jiabao began to publicly mention the 3% ceiling. China's financial reports for 2010 clearly state that the ratio should be 3% or less.

Probably as a result of efforts to drastically reduce government spending, the ratio dropped to the mid-1% range in 2012. Under President Xi Jinping, who took office in autumn 2012, the government has maintained the target by avoiding massive outlays in the face of a slowing economy.

Behind China's careful approach to spending is fear of inflation, even though the country is in much better financial condition than, say, Japan. The Tiananmen Square pro-democracy protests of 1989, which resulted in a military crackdown, were triggered in part by the public's mounting frustration over inflation that was approaching nearly 20%. 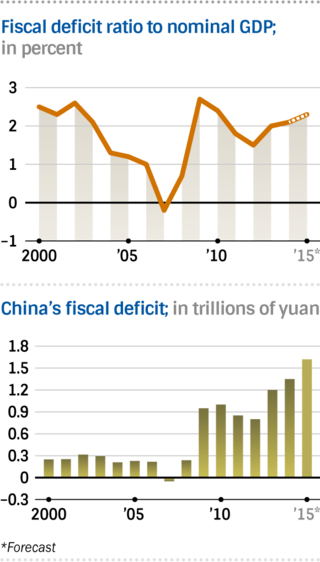 If irresponsible spending were to trigger a price surge that fueled social instability, it would shake the foundations of the Xi administration. Officials in the Chinese Communist Party have insisted that even the tiniest signs of inflation must be removed.

Another concern relates to national security. China has been increasing its defense spending by more than 10% every year, which places a huge burden on the national budget. To secure enough money for such outlays, the government is trying to keep its spending under control.

When an economy is barreling along at a high growth rate, the deficit-to-GDP ratio can be kept low by an expanding GDP. With a slowing economy, however, it is harder to hold the ratio in check. This is what China faces today.

If its economy does not grow as fast as expected, the deficit ratio may soon break through the 3% ceiling. How China chooses to act -- stick to the deficit ratio target or prioritize bigger spending -- the decision will significantly affect the global economy, as well as security in East Asia.