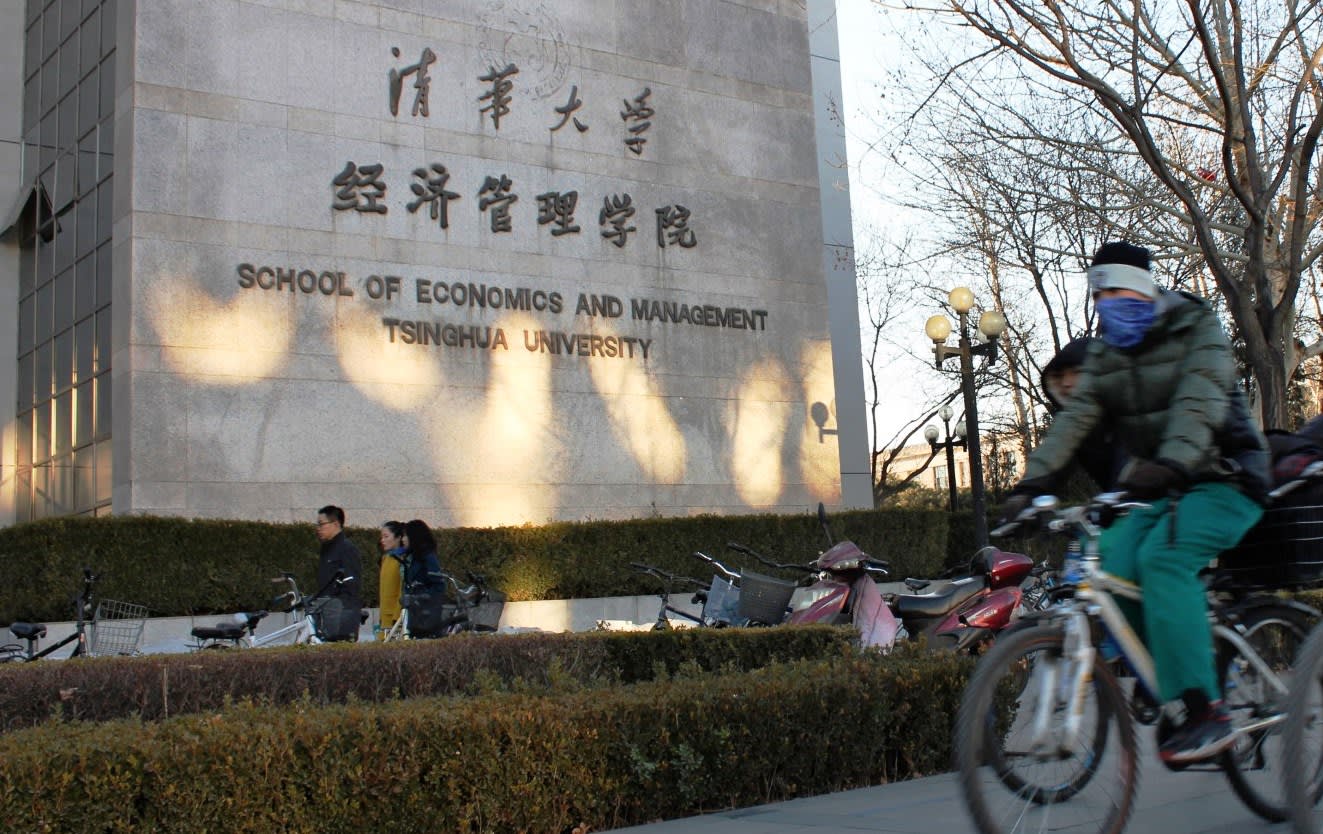 The campus of Tsinghua University
Economy

A university advisory board could become key China-US conduit

TOKYO -- Chinese President Xi Jinping's regime is under pressure to rethink its U.S. strategy now that Donald Trump has been inaugurated as president of the U.S. and appears intent on changing the power dynamic between the two giants.

Trump, a 70-year-old billionaire business tycoon and Republican outsider, has vowed to pursue an "America First" policy. He has used tough anti-China rhetoric when talking about trade and other issues.

But there is one conduit Xi is counting on through which China might be able to diplomatically maneuver and smooth relations between the world's two largest economies.

"One underground water vein that plays a key role in China's maneuvering on relations with the U.S. under Trump is located at Xi's alma mater," a source said.

The source is a Beijing-based researcher who specializes in China's external political and economic strategies. The researcher's remark sheds light on a little-known aspect of economic relations between China and the U.S.

What is the conduit? A quick look back at the most recent World Economic Forum in Davos, Switzerland, helps answer this question.

Xi lunched with Stephen Schwarzman, chairman and CEO of Blackstone Group, and others on the sidelines of Davos, an annual meeting of heavyweights from industry, government and academia. Blackstone is one of the world's largest investment funds, managing more than $300 billion.

Tsinghua University, a prestigious educational institution in Beijing, is the glue that binds Xi and Schwarzman together.

Xi studied chemical engineering at the university in the second half of the 1970s; Schwarzman serves on the Advisory Board of the university's School of Economics and Management. Schwarzman offered a large sum of money to establish an eponymous scholarship program that now attracts students from the U.S. and other countries to the university.

Trump has also sparked speculation that he is using Taiwan for negotiating leverage in trade talks with China, with which the U.S. has its largest trade deficit.

In a move that broke with long-standing U.S. diplomatic protocol and angered Beijing, Trump held a telephone call with Taiwanese President Tsai Ing-wen of the pro-independence Democratic Progressive Party on Dec. 2.

Beijing regards Taiwan as a renegade province that must be reunified with the mainland, by force if necessary, and has pressured the Taiwanese leader to acknowledge the "One China" principle.

Trump has repeatedly expressed doubts about this principle, which the U.S. has upheld for decades.

"I don't know why we have to be bound by a one China policy unless we make a deal with China having to do with other things, including trade," Trump said, as quoted by many media outlets, days after taking Tsai's call.

As Trump uses the self-governed island as deal-making fodder, Xi and other Chinese officials are pinning their hopes on members of the Strategic and Policy Forum, a new panel set up by Trump to make policy recommendations.

Schwarzman is the panel's chairman. This is why Xi met with him in Davos, shortly before Trump's inauguration.

Trump is expected to take a carrot-and-stick approach to China, seeking better deals through both pressure and dialogue. Xi apparently sees Schwarzman as a key person in the coming dialogues.

In addition to Schwarzman, the President's Strategic and Policy Forum has many other members who, to one extent or another, share interests with China or are well-versed in China. One of these is Jamie Dimon, chairman and CEO of U.S. financial giant JPMorgan Chase & Co.

A big reasons for this is that the China Investment Corp. acquired a stake of just under 10% in Blackstone for $3 billion when the Chinese sovereign wealth fund was inaugurated in 2007.

When CIC invested in Blackstone, it was led by Lou Jiwei. Lou later became China's finance minister, a post he held until recently.

Blackstone incurred a huge loss amid the 2008 global financial crisis. As a result, CIC also suffered a blow.

At the time, leftist and conservative groups that still adore Mao Zedong, the charismatic revolutionary leader who led China to communism, wanted Lou to be held accountable for CIC's loss.

JPMorgan also has close relations with China, as evidenced by the recent scandal involving the banking giant's hiring of nearly 100 children and relatives of senior Chinese officials, including those at state-owned companies.

The U.S. Justice Department and Securities and Exchange Commission investigated the case and determined that JPMorgan pocketed huge amounts of operating revenue in return for its corrupt hiring practice.

The Advisory Board of Tsinghua University's School of Economics and Management has played an important role in economic relations between China and the U.S. It was established in 2000 with the backing of then Chinese Premier Zhu Rongji.

Soon afterward, new public-private joint ventures on the lookout for technologies and funds from the West began to spring up like mushrooms on and around the campus.

Zhu, a graduate of Tsinghua University who has a sharp economic mind, still wields significant influence. He currently serves as honorary chairman of the Advisory Board.

Some members of the board also serve on Trump's strategy and policy forum. They include Mary Barra, chairman and CEO of General Motors, Blackstone's Schwarzman and JPMorgan's Dimon.

The Advisory Board includes other prominent business tycoons. Among them are:

The Advisory Board is not just a constellation of prominent global business tycoons. It also includes many incumbent Chinese dignitaries, such as Wang Qishan, Zhou Xiaochuan, Liu He, Lou Jiwei, Ma Kai and Guo Shuqing.

Wang, a close political ally of Xi, has spearheaded the Chinese leader's anti-corruption campaign as the head of the Central Commission for Discipline Inspection, the Communist Party's top anti-graft body.

Zhou is governor of the People's Bank of China, the nation's central bank.

Liu is Xi's top economic adviser and serves as the director of the Office of the Central Leading Group on Financial and Economic Affairs, the party's top panel on economic affairs. Ma is a vice premier and Guo is governor of Shandong Province.

Many of these and other Chinese board members are disciples of former Premier Zhu.

When foreign members of the Advisory Board visited China in autumn, they received a red carpet welcome. They were even greeted by Yu Zhengsheng, No. 4 in the Chinese Communist Party's hierarchy.

Yu serves as chairman of the National Committee of the Chinese People's Political Consultative Conference, the country's top political advisory body. He is also in charge of "united front work" -- securing foreign allies who cooperate with China's global strategies and carrying out similar duties. 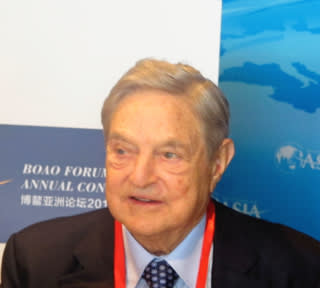 Soros made the comment during a TV interview. As for the Chinese economy, he said, "a hard landing is practically unavoidable. I'm not expecting it, I'm observing it."

Soros' remark was widely taken as a snub by a Xi regime that was busy trying to achieve a soft landing through slower yet stable growth.

Soros came under a barrage of attacks from the Chinese government and media outlets like the People's Daily, a Communist Party mouthpiece.

As a pioneer of the hedge-fund industry, which now wields great influence over global markets, Soros had been hugely popular among Chinese business people and investors. Bookstores -- including a state-run shop in Wangfujing, central Beijing -- loaded their shelves with Soros' tomes.

When Soros was invited to the annual Boao Forum for Asia conference on Hainan Island, located on the southern tip of mainland China, in the spring of 2013, he spoke to an overflowing crowd.

But things have changed dramatically since then, and Soros' books are now disappearing from bookstores in Beijing.

Meanwhile, it was Xi who grabbed the spotlight at this year's Davos meeting, as major western leaders missed the international powwow. In a thinly veiled rebuke to Trump, Xi warned against trade protectionism. After meeting with Xi in Davos, Blackstone's Schwarzman said he was assured that the Chinese president wants to avoid a trade war with the U.S. Xi was "very positive on the long-term relationship between the countries," Schwarzman said in a Bloomberg Television interview on Jan. 18.

In the eyes of China, Soros and Schwarzman have traded places. It can be said China has now given Schwarzman a strong "buy" rating while downgrading Soros to a strong "sell."

In a clear sign of his intention to pressure China on trade, Trump tapped Peter Navarro, a professor at the University of California at Irvine and a fierce China critic, as head of the new National Trade Council.

Navarro directed a documentary, "Death by China," and insists that buying Chinese products is the equivalent of helping to finance China's military buildup.

The National Trade Council is very likely to become the command center for U.S. dealings with China.

The President's Strategic and Policy Forum, headed by Schwarzman, is to hold its first meeting soon. Trump is to be on hand. Will the forum play a role in making demands on China? How will the forum and National Trade Council divide their roles?

And how will Xi respond?